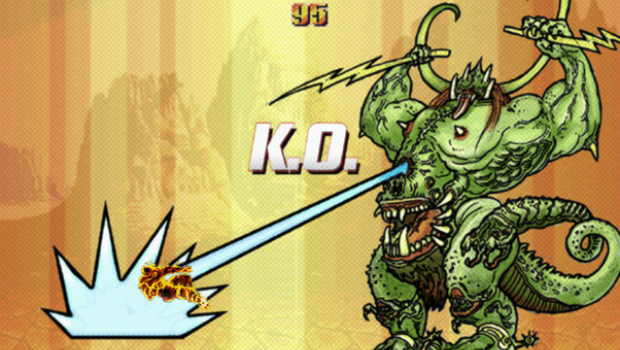 [(Almost) every month we post a new art assignment for the Dtoid community. Fun! You have until Wednesday, October 31st to finish this month’s project, which is detailed at the end of the post!]

First of all, please forgive the tardiness of this month’s post! PAX threw off my schedule at the beginning of the month, and by the time I got around to posting this it made more sense to just wait until October. Apologize!

Now that that’s out of the way, on to business! For August’s Artists Wanted assignment, we asked you to think about what it meant to be a videogame BOSS. Four of you accepted the challenge, so let’s take a look at what you came up with!

First out the gate this month was an Artists Wanted mainstay, Roberto Plankton, with his three pieces entitled “A Boss is a Boss is a Boss. Boss”:

Bosses in fighting games demand a higher degree of attention or skill; I am perfectly alright with that. But they also tend to force the player into a certain style of playing the game. These atrocities are not only the developer’s projection of his own wet dreams of omnipotency, they are also interrupting my flow.

And they are not fun. They don’t generate a feeling of achievement after I finally beat them. I do not want to spam the same moves over and over again or rely too heavily on (overused) super-special-ultra-meters. I am forced to play a certain way; I am forced “to pay attention to the that man behind the curtain”. I hate that.

What an epic dook! Thanks for sharing, Roberto! (Click here to see his other two entries!)

Next up for August was Anaugi with “Ridley Can Do a Sick-ass Kickflip, Yo”:

I wanted to use the word “Boss” in a way that people don’t usually do. I decided to have Ridley from the Metroid series do something that was “boss”, as in the adjective that extreme teens used to (and maybe still do) use. What’s more boss than a radical kickflip? Nothing.

Next out the gate was Panzadolphin56 with his piece, entitled “Learning the Tools of the Trade”:

A rare glimpse behind the scenes of where bosses come to learn their trade. I mean, they must all learn it from somewhere, right? Somebody obviously must be teaching them all these conventions and contrived tropes…. why else would they lose so often?

Hilarious stuff, Panza! (Bonus game: see if you can identify all the bosses in the pic!)

And finally, our last entry for August was MeanderBot‘s piece, titled “Middle Management”:

Being a boss is a pretty nice position to be in. Dozens of underlings at your beck and call, your own sweet lair, and the opportunity to deliver an epic monologue before kicking some ass! But let’s face it: chances are that you aren’t at the top. So while you do get a taste of power, there’s always some jerkface above you with a ridiculous ego and delusions of grandeur. But you have to take the good with the bad, and take solace in the fact that at least you aren’t a fuckin’ Zeb.

And that’s it for August! What an awesome month! Thanks to everyone who contributed!

And now, October’s assignment. For this month, I’d like you to dream up your ideal videogame CROSSOVER. Would you like to battle the Covenant alongside Master Chief wielding Mega Man’s Blaster? Wanna see how Kirby would fare versus the Left 4 Dead zombies? Wonder how Soap and Price would handle a Koopa Troopa invasion? Draw whatever you’d like; it doesn’t have to make sense! (The only rule is, no drawing existing crossover IPs!)

To see your art appear on the front page, simply write a Community Blog and title it “CROSSOVER: [Title]”. In the blog, post your art and a bit about the process that went into making it. Then at the end of the month, we’ll gather them all up and put them on the front page!