Boss: Learning the Tools of the Trade 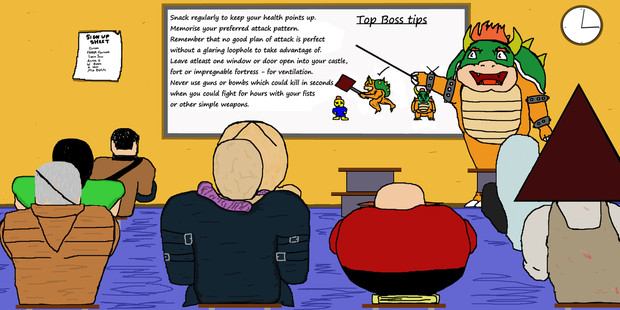 A rare glimpse behind the scenes of where bosses come to learn their trade - I mean they must all learn it from somewhere, right? Somebody obviously must be teaching them all these conventions and contrived tropes.... why else would they lose so often?

This was pretty much the first idea that came to mind when I thought of what a Boss means, I'd liked the behind the scenes topic from a couple of months back but never managed to put an idea together for that but I kind of felt as though it was one of the often overlooked aspects of being a boss - where they actually learn to be a boss, and where the concepts and conventions that define a boss come from. Also, it's kind of fourth-wall breaky.

Also also, I think it kind of fits my abysmal paint brush skills.
Login to vote this up!