The videogames industry has a complex: it relies, perhaps too much, on the concept of genre, but being “generic” is an offense of grave proportions. Being “innovative” is, naturally, antithetical to being generic.

According to Matt Goldman, art director for BioWare’s Dragon Age II, being generic was an actual design principle for the Dragon Age: Origins art team. While Goldman didn’t direct the art department that worked on Origins, he’s familiar with the instructions the former team was given: “Actually, the design creative was ‘it’s generic,’ which isn’t the most inspirational direction that you could give a team.”

When speaking about improvements on Dragon Age: Origins, lead writer David Gaider takes a more measured stance: “The graphics [in Origins] were dated. They were functional, but they weren’t pretty, and you could tell that the game had been cooking for five years.” That’s a technical assessment, to be sure, but it could also point to the game’s dated, archetypal fantasy look as a whole.

Goldman agrees: “And, you know, to be honest you’re going up against Lord of the Rings and Conan and other established [intellectual properties] that have nailed that ‘generic’ fantasy way harder than we’re ever gonna nail it. “I totally think that the art style needed to change.”

And change it did: where Ferelden was filled with dour-looking peasants and muddy, muddled Darkspawn, the Free Marches seem a vibrant, thriving, sun-kissed locale. The character designs are sharper and more varied, the forests more verdant, the town of Kirkwall soaring — thanks to DAII‘s new camera — to new heights. 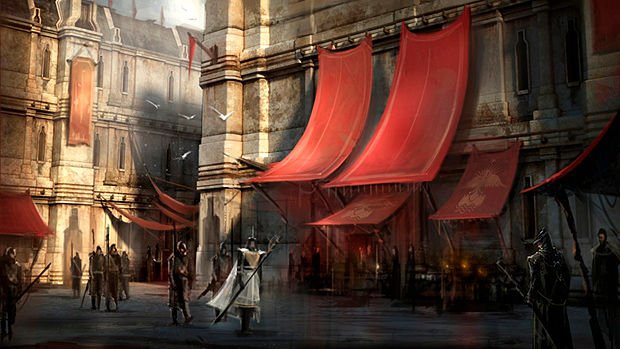 I recently interviewed Goldman, and it was evident that his thesis — not an uncommon one — is that his art should complement Dragon Age II‘s focus on tight combat and character interaction, even while the story suggests darker and harsher themes. 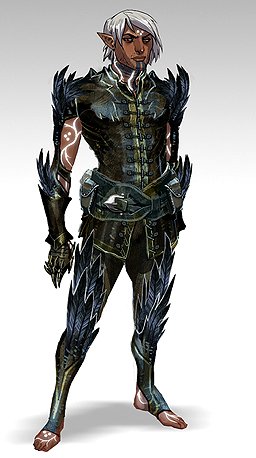 One of the most straightforward examples of aligning art and game design Goldman could give me was the character Fenris, a former Tevinter slave with lyrium scars from years of torture. “That guy, he required a lot of going back and forth between design and art. I think we redesigned that guy ten times.” Fenris’ character design is a function of his backstory as well as his role in battle, both of which changed well into development, sending Goldman’s team “back to the drawing board … trying to blend those elements into something that’s interesting and unique from everybody else in the world.”

“I don’t think you need to show a drill going through a baby’s eyeball to tell a terrible story,” he says to me. “It doesn’t need to be black and dripping with blood — that’s pretty Halloween.” He uses Halo as an another example: “If you read the backstory and the literature from that game, that is one grim hellhole of a universe. That’s not what the game plays like.” He adds that Halo doesn’t look like that, either.

In a recent Q and A session at BioWare’s Edmonton studios, lead designer Mike Laidlaw explained that, for his team, “style is measurable.” After picking a slew of visual inspirations — other games, art, film, wood cuts — the art team studied the color palettes and saturation levels that most appealed to them. Their first task was to set out to replicate those styles in Dragon Age II.

The second step of Dragon Age II‘s visual overhaul was to create what Goldman describes as “picture-making opportunities.” Taking particular cues from The Triumph of Death — a 16th century oil painting by Pieter Bruegel the Elder, a Flemish artist — and Akira Kurosawa’s classic 1957 samurai film, Throne of Blood, Goldman’s team studied each artist’s use of planar composition and negative space to frame each scene in a way that focuses on character interaction.

The result is a brighter, more colorful game, with a focus on a dramatic presentation layer. “Just because you’re treating dark themes doesn’t mean it has to be physically dark and that you can’t see where you’re going,” explains Goldman, setting his game apart from the current trend in videogame visuals. “By setting the story in a place that has better picture-making opportunities, you can use the framing … to evoke a mood.”

This new focus on framing manifests itself in battle: the corollary to producer Mark Darrah’s oft-criticized mantra — “When you push a button, something awesome happens!” — is that the art direction makes sure it looks cool, too. But the shift towards careful composition also dovetails with the game’s new dialog wheel. Gone, perhaps, are the days of picking dialog options from a list and watching your Warden, emotionless, as he plummets into the uncanny valley. (Ever the diplomat, David Gaider describes the Warden as a “posed, silent spectator.”)

Instead, Laidlaw describes a conversation between the player-character, Hawke, and Avalene, a Kirkwallian guard. “You go to the base, she’s in a spot where she’s at home, she’s comfortable. We can have her leaning on desks, moving around, and interacting with stuff and a scene can play out. Not just, ‘Hello, I am talking at you,’ but a scene, a moment that occurs.” 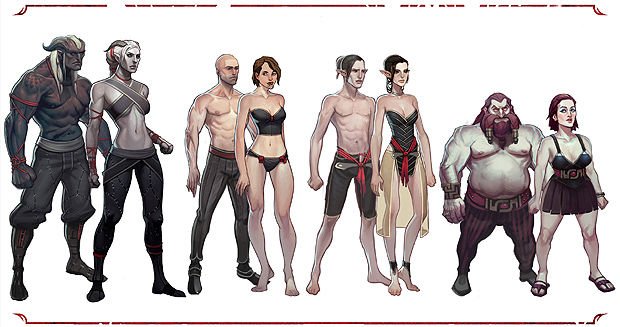 In a different interview, writer David Gaider explains to me that, “Ultimately, what we’re telling is the story of Thedas, the world of Dragon Age.” And that world includes a myriad of races and cultures that need visual representation. Goldman’s art direction again saves the day, circling back around to world-building, something BioWare does well. Players’ abandon their suspension of disbelief when they realize, for example, that “everyone’s using the same hand model. So the women kind of look like burly man-dudes because they’ve got rail-thin hips and these huge hands.” Lazy art exposes the artificial framework that games like Dragon Age try to hide.

“We have four different races in our game. That’s an opportunity for us to explore different standards of beauty,” Goldman explains to me. “So, in the case of the basic race-sex setup, each of them has to be attractive in their own right to somebody. I think that was really important and that took a lot of work.” Having strong character designs not only keep each world internally consistent, but they fulfill the ambassadorial role that Goldman assigns to art design. Morrigan was the most successfully marketed character from Origins: “Her appearance is really unique. She had the best face, the best lip sync. And to [keep] that really good design on all of our characters, we made certain decisions — to limit the amount of changes you could to do them.” 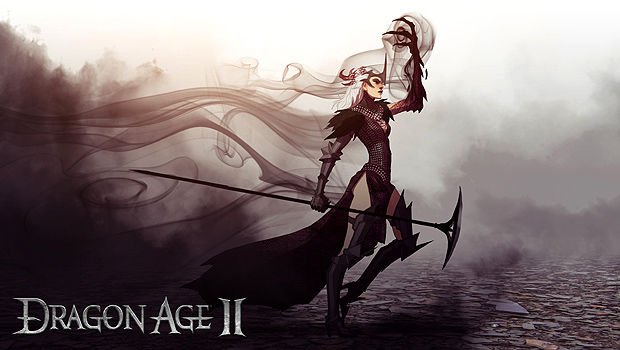 Goldman is modest about his team’s role in Dragon Age II: “Art is … the ambassador, you could say. People see it. And they can react to that with no other information than just a screenshot. … But, that said, if the design is crummy, your product is not going to sell. I’m basically saying that, you know, art is important, but we have our place. You can’t just sell something on the basis of art alone. Probably.”

He might be selling himself short, though, as it’s clear that his team’s work is crucial for presenting everything from the combat to the game’s new narrative structure as effectively as possible. After some prodding, he comes around: “The art is important, especially for an RPG, because the art helps draw the player in and make it a more immersive story-telling experience … If the art is aligned with the design intent … then it makes the design much stronger.”