Rocksteady Studios has found itself in a somewhat precarious position with Arkham Knight. The team’s two previous installments in the series are so universally revered that it begs the question “What can it do to live up to, and surpass, Arkham Asylum and Arkham City?” Rocksteady’s opted to take the path of increasing the scope of everything and changing the formulaic approach to some of the series’ conventions. It remains to be seen how well it’ll work.

Arkham Knight is the first in the “Rocksteady Trilogy” (this term kept coming up, presumably to distance themselves from Arkham Origins) to give Batman free rein of Gotham City. The plot device driving this iteration is that Scarecrow has threatened to release a fear toxin so the entirety of the city has been evacuated. Well, except for all the thugs, criminals, and super villains that refuse to leave. They’ll be Batman’s punching bags en route to finding Scarecrow.

If this version of Gotham City sounds like semi-familiar territory, that’s because it kind of is. The cynically analytical might say this walled-off playground full of baddies smacks of Arkham City with skyscrapers. The optimist might suggest that this added verticality is a welcomed progression for the series. 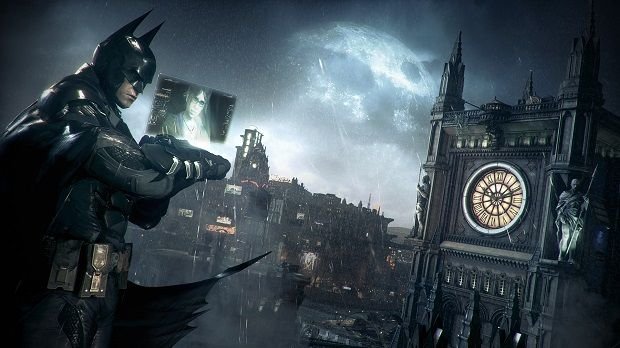 Truth be told, the latter might be spot-on. During the 45-minute hands-off demo, Arkham Knight was at its finest as the The Caped Crusader sailed across the cityscape, rain pounding the screen as his dozens of stories-long nose dives lead to intense upthrusts that kept him afloat. As always, the staples of the arsenal such as the grappling hook are available to make traversal easier, if not much quicker, too.

Arkham Knight sees Batman’s tools make a dynamic shift in functionality, though. New to this installment is what the developers called “Gadgets While Gliding.” This enhancement to the franchise’s core systems is meant to provide for seamless transitions between flight, exploration, and combat. For instance, The Dark Knight can now shoot the Line Launcher while in the air to come to an immediate perch between two buildings. Likewise, he can descend upon a group of enemies and throw his first Batarang to start the fight off before he even hits the ground.

Judging by some presentation decisions that permeated the demo, Rocksteady’s intently focused on providing as much seamless transition as possible. One of the most impressive things shown was the way that gameplay segued perfectly into a cut scene once an objective was reached. It looks like cut scenes will be a treat too, as the ones presented were nothing short of gorgeous. Rocksteady has the same mentality for the environments, as the game smoothly moves from external to internal settings. 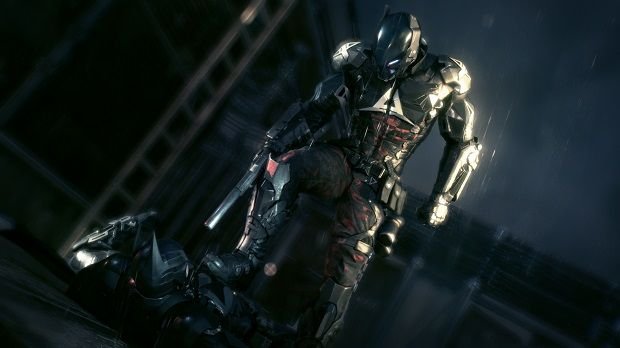 While on the topic of the way Arkham Knight looks, it seems as good a time as any to mention that the demo we saw was plagued by framerate issues, stuttering and chugging along every few seconds. Seeing as the game’s seven months out from release, and given Rocksteady’s track record, it doesn’t feel right to judge it yet based on that. However, it happened, and it’s worth noting as we chronicle our time with the preview build.

One of the defining mechanics of the Arkham games is the combat system. Always a friend to the rhythmically-conscious instead of the button-masher, Arkham Knight is poised to carry this tradition on. The fighting appears to be exactly what we’ve seen in past games. If it ain’t broke, don’t fix it, right? However, there are two small augmentations; Batman now has two new moves — a throw counter and a disarm where he can use the enemy’s weapon until it breaks. Presumably this won’t extend to firearms, ’cause, you know, Batman doesn’t kill people.

But, the biggest and most talked about addition this time ’round is the inclusion of the Batmobile. The storied vehicle will add variety in the way that it’s possible to traverse Gotham. Rocksteady pointed out that it designed Gotham in service to the Batmobile, and thusly, added a lot of destructible environments. 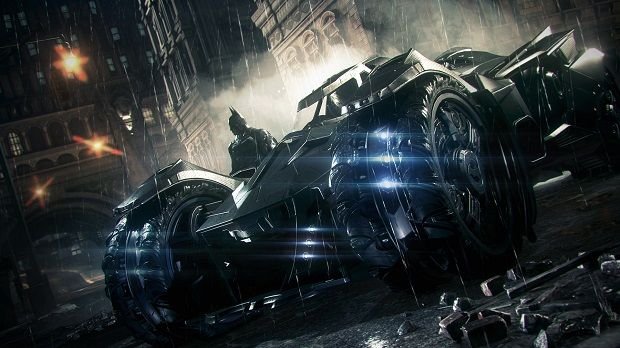 One of the more noteworthy features of the Batmobile that we were shown is the ability to eject Batman, and use the momentum to send him flying up and forward at an incredible rate. That doesn’t mean that you leave your car behind, however. At any given time, the Batmobile is just a press of a button away, and seconds later it’ll reappear.

The Batmobile isn’t just used for travel, though. It’s going to change the structure of the series that we’re used to. One example of this is the introduction of Riddler Caves. It seems that The Riddler’s puzzle sections are now gone, replaced by driving circuits that Batman must best. These play out as three-lap solo races, where the player has to drive and press a button to change the environment and add paths/remove obstacles. Honestly, it wasn’t clear at first glance whether these will be a worthwhile addition to the game, or a thinly-veiled means of justifying the Batmobile’s existence.

By the time the demo ended with Arkham Knight, the game’s newly created super villain, ambushing Batman, it was apparent that we were shown a lot, yet shown nothing at all.

We were given a glimpse at some of the changes Rocksteady’s making, and the introduction of the mechanics that will tie the entire game together. However, we saw next to none of the interactions with villains or narrative setpieces that make Batman fans so giddy when playing the Arkham games. And, ultimately, it’ll be those experiences that make or break Arkham Knight.