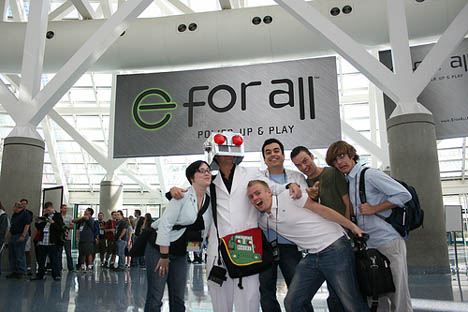 Even though the first-ever E for All Expo didn’t turn out exactly as expected, I still had a pretty good time there. But that had more to do with Destructoid than it did the event. As an industry event, it was really weak. Nintendo dominated the floor showing their wares, and Konami showed face, but the rest of the event was basically a gamer ghost town. It was like a big house party that had a bad turnout.

This year, more of the “cool kids” are supposed to show up. We’ve received word that Microsoft will be attending the second E for All Expo, which takes place October 3-5 at the Los Angeles Convention Center.

“Microsoft’s presence at the 2008 event will help us build on the great success of last year’s inaugural E for All event, and will further our goal of building an exciting and cutting-edge event that brings the best and newest games to gamers of all types. We look forward to a terrific 2008 event, and to having the opportunity to bring even more great game products to the great gamers who attend E for All,” said Mary Dolaher, CEO of IDG.

Of course, this release does not tell us anything about what Microsoft will be showing. But at least they’ll be there, right? Let’s hope they’re not the type of people that show up to a party and then leave after having a couple of drinks.

Dolaher says that additional E for All participants and features will be announced in the coming weeks.

Are you going to E for All this year?