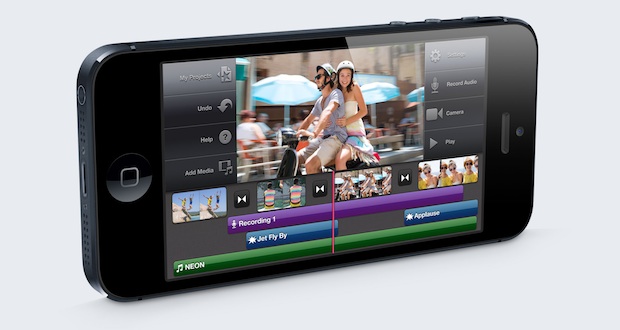 No one on this planet was surprised when Apple announced the iPhone 5 today at their press conference in San Francisco. Still, the world has been waiting on details, and now we have them for you.

Apple calls it “the most beautiful product we have ever made, bar none.” It’s made entirely out of glass and aluminum, the thinnest and lightest phone they’ve ever made. It’s 20 percent lighter and 18 percent thinner than the iPhone 4S. It will come in two colors: white with a raw aluminum back. and black with a black anodized backing.

As expected, Apple’s new phone sports an elongated screen. It’s a 326ppi Retina display, four-inches. The resolution is a massive 1136 x 640, making for a phone that is the same width, but taller. This adds the ability to display one additional row of apps.

On the inside, the new A6 processor doubles the speed and graphics of the A5 chip. Rob Murray from EA took the stage to show off Real Racing 3 running on the iPhone 5. He called the visuals in his demo “full console quality.”

Apple is calling the wireless tech inside this new phone Ultrafast Wireless, which encompasses GPRS, EDGE, EV-DO, HSPA, HSPA+, DC-HSDPA and LTE standards. On the WiFi side, it’s 802.11n, for speeds up to 150 Mbps.

The iPhone 5 battery is slightly improved with 8 hours of talk time, even on an LTE connection. You’ll get 10 hours on a WiFi connection only.

The camera is an eight megapixel, 3,264 x 2,448 backside-illuminated sensor with a f/2.4 aperture, not unlike that of the iPhone 4S. The front-facing camera isn’t as good, but it does 720p video now.

A brand new dock connector debuts with the iPhone 5, making all of your current accessories useless. Maybe. It features a smaller, reversible plug that they’re calling Lightning. There will be an adapter to use older accessories, but it’s pretty bulky looking.