I’ve put a lot of time into The Witness lately. Like, a lot a lot. Effort too. This might be the most draining review experience of my career. It’s rewarding though, and that makes it less burdensome even if it’s still incredibly taxing.

For the past week, I’ve been saying good morning to my coworkers every day by telling them how late I stayed up the night before playing The Witness. “Didn’t go to bed until at 3am, guys.” “Played that shit until 4am, somehow.” “This game kept me up until FIVE-FUCKING-AM, dudes.” That, every single day.

Jordan beat me to the punch on Thursday by telling me that he took a look at my PS4 profile recently and it was absolutely nothing but The Witness. He’s right. It looks like this: 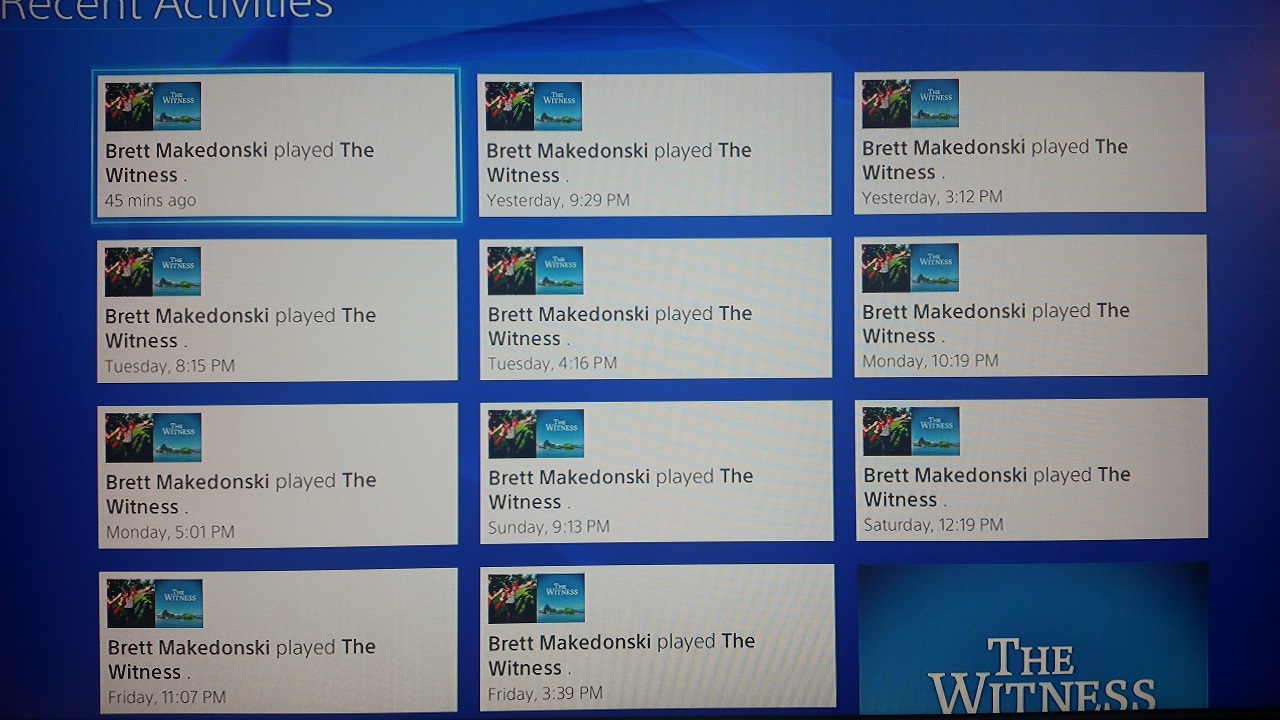 That screenshot really drove home how I’ve committed myself to The Witness and only The Witness. It got me thinking about not only the amount of time I’ve spent in-game, but all the crazy out-of-game tasks I’ve resorted to. Here are some pictures.

(Note that there are minor spoilers in this post. While there are no direct puzzle solutions, there are representations of possible solutions. You’ll probably be fine if you don’t dwell on any of them for too long or give them any serious thought. Heads-up, though.) 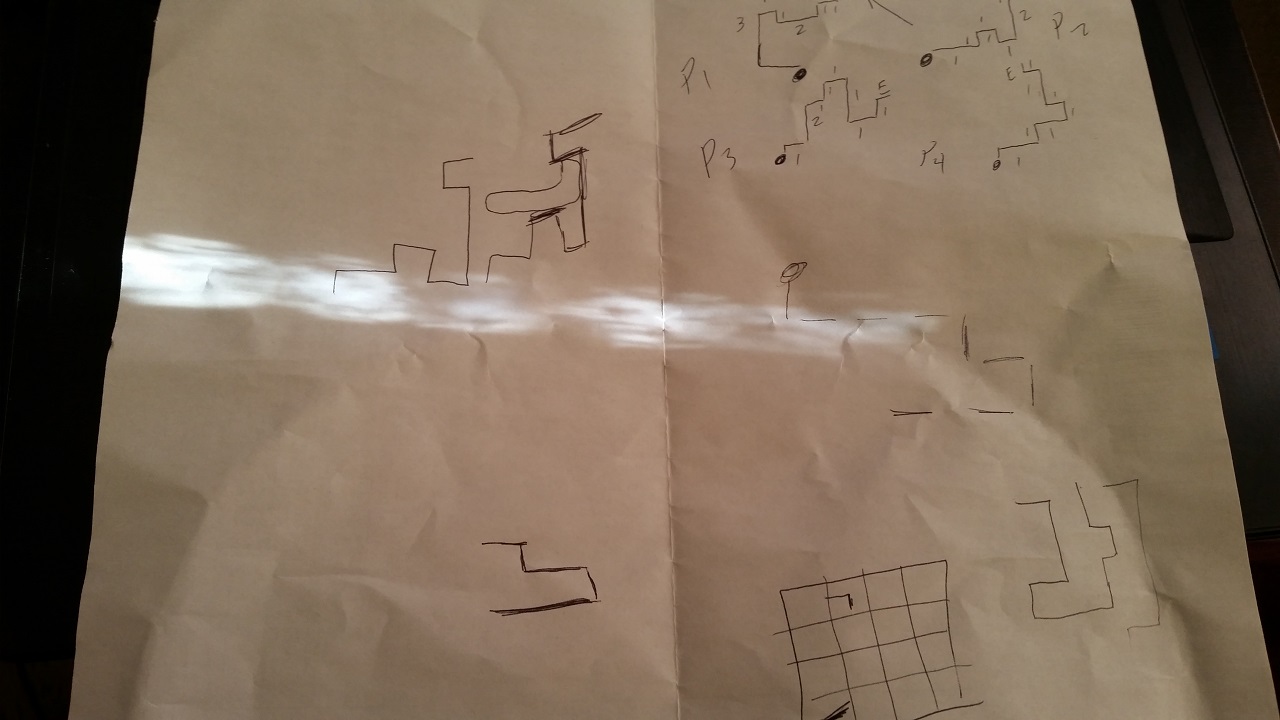 This is some sketching I did early on. I thought that was a little extreme. It got so much worse. 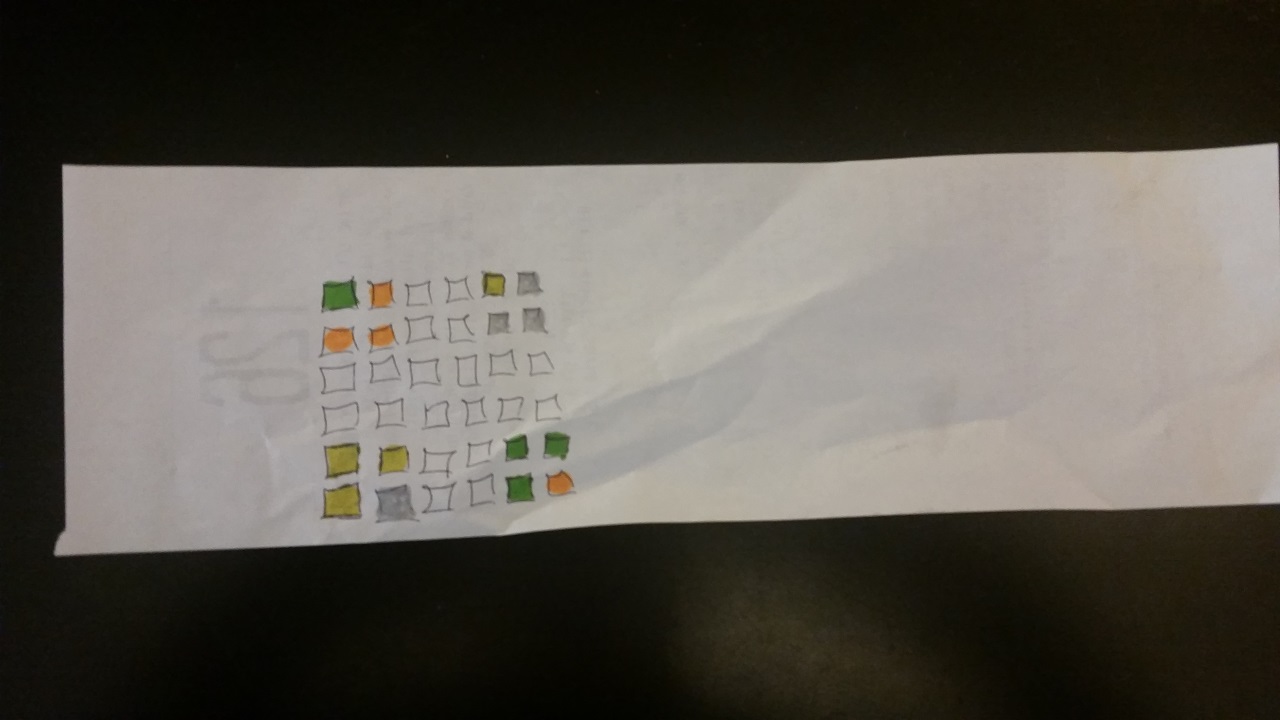 Coloring some boxes, all on the back of a fast food receipt. This was about the time that I realized my TV was kind of dusty because the sunlight shining on it illuminated all the lines I had been drawing with my fingers. 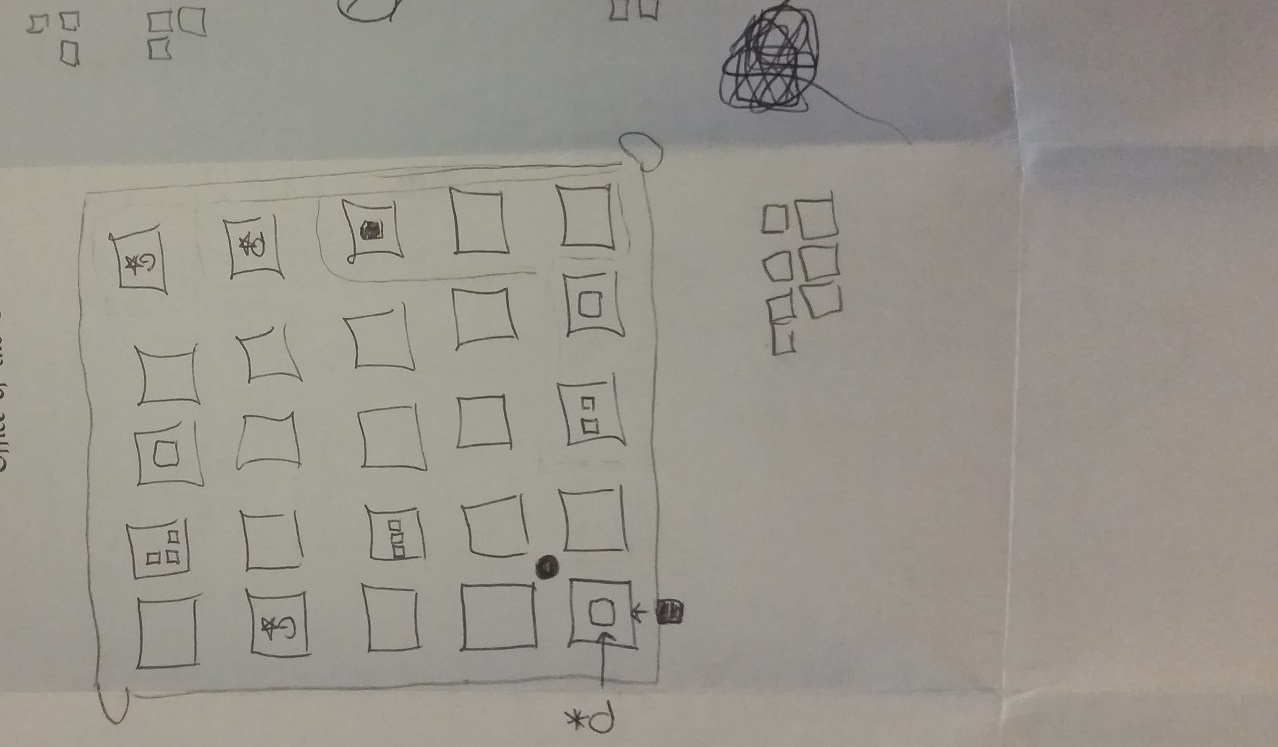 More sketches, this time on the back of a letter my grandma sent me. 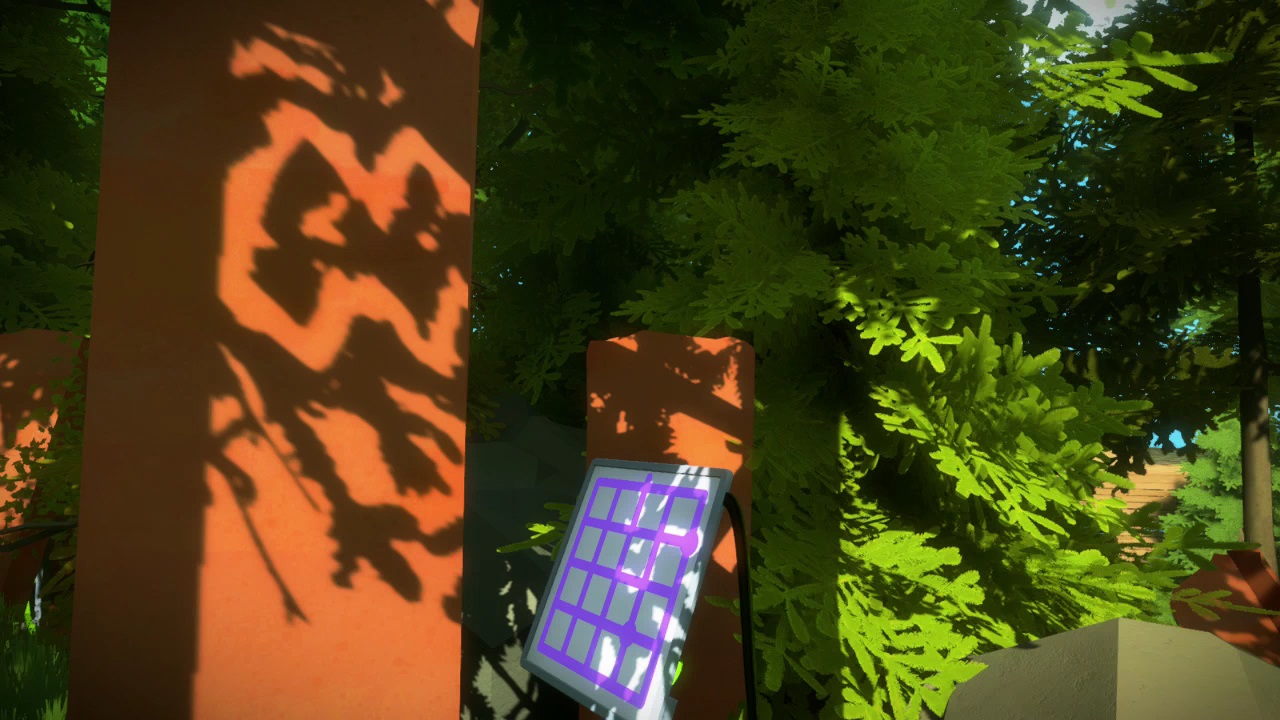 This is just a random screenshot I took so that I could move position and reference how something looked from another angle. My recycle bin is absolutely packed with these. I could show another hundred, but that’d waste everyone’s time.

Here’s a video that I captured very early in the game. It seemed complicated and I was proud of myself for figuring it out. My original idea was to slap together a video titled something like “Five of The Witness‘ toughest puzzles at the beginning of the game.” I soon realized that’s in no way how this game works. Idea mostly scrapped, but a memento salvaged for this piece.

I wrote this in a Google Doc at 2am one night. If I died and this were the only thing I left behind, philosophers would study me for centuries to come. 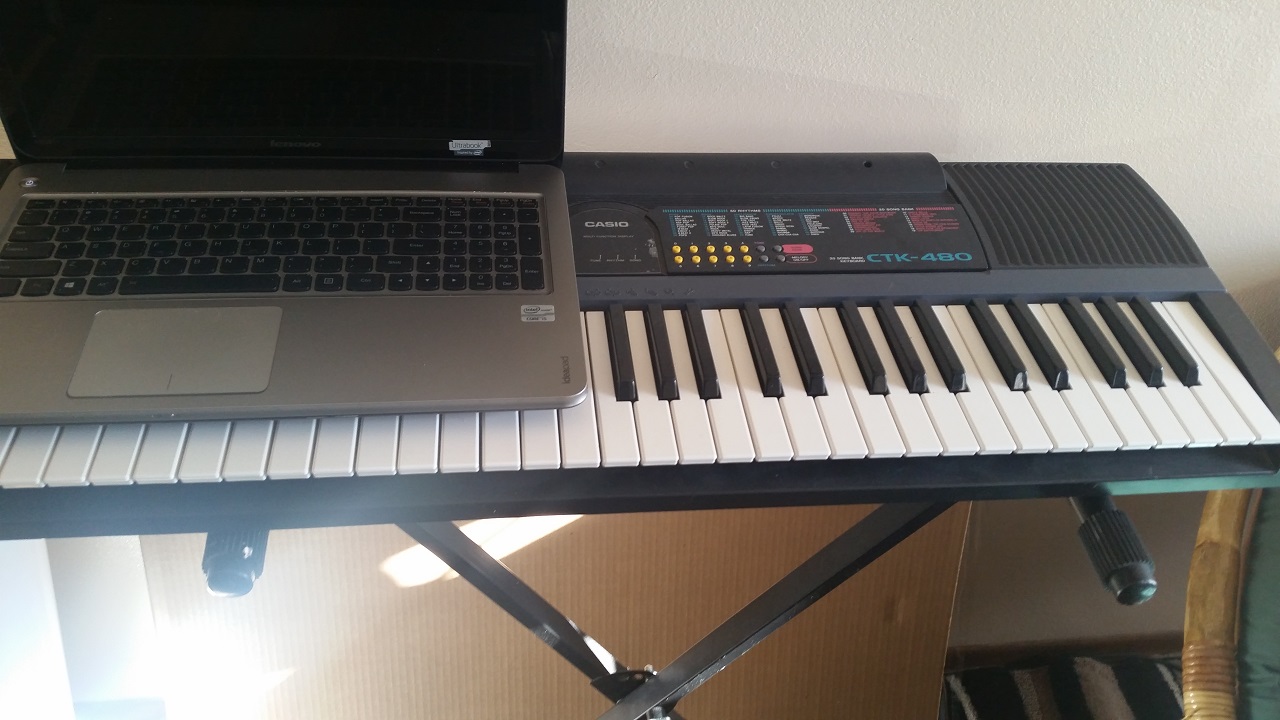 Here’s a keyboard I lugged down to the living room and started playing. Keyboards just make sense to me. I get ’em, you know? 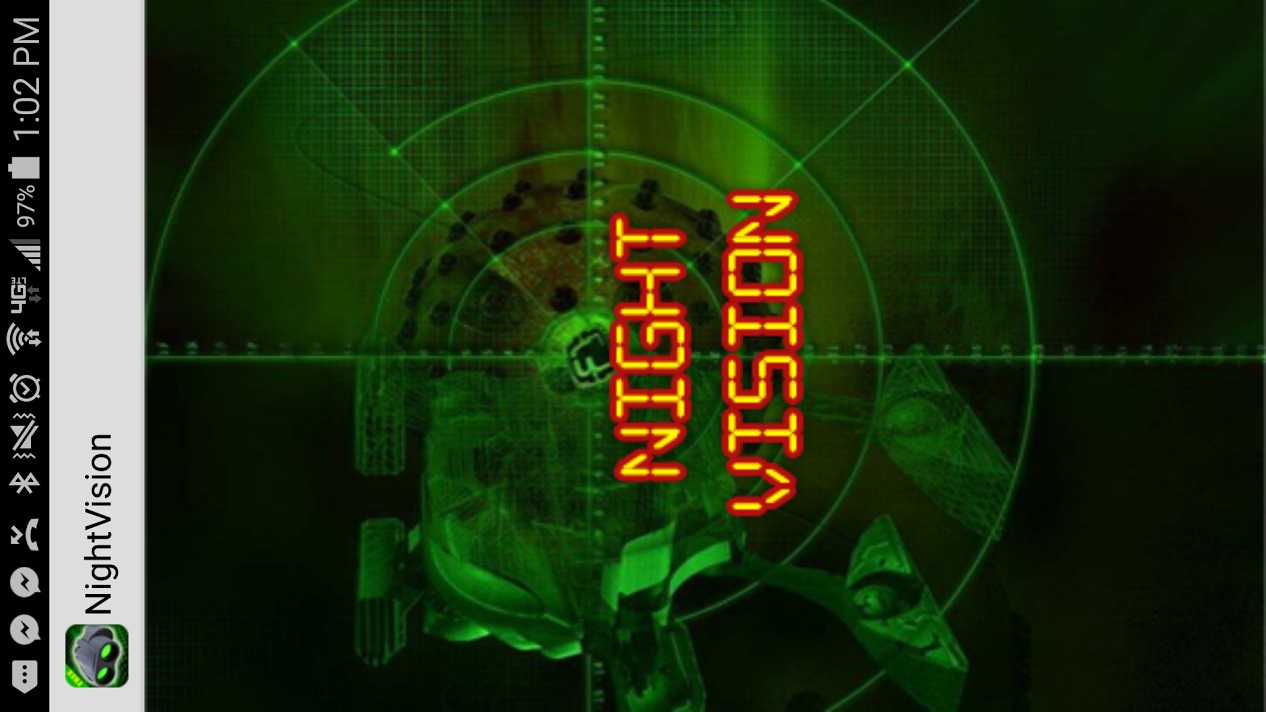 A shoddy night vision app that I gladly downloaded on my phone. Jonathan Blow didn’t send me on a top-secret reconnaissance mission. I just wanted to see what everything would look like at night. Also, that app is riddled with ad-ware. It’s miserable.

There’s more, but this collection seems like it nicely encapsulates my experience with The Witness. Had it taken one more day, the neighbors probably would’ve seen me drawing on my windows with chalk. Somehow, it never came to that.