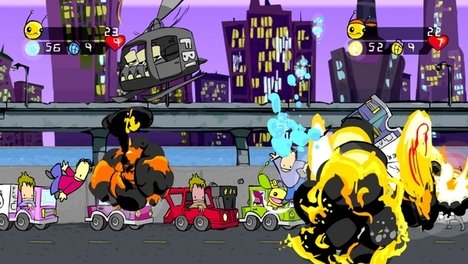 Though we knew it was coming soon, Microsoft has just sent us word that Alien Hominid HD is 100% set to come to Xbox 360 users this Wednesday via Xbox Live Arcade. From the press release:

The cult favorite offers high definition alien action that makes it better than ever before. “Alien Hominid HD” from The Behemoth is a side-scrolling extraterrestrial experience like no other, and will be available for download on Xbox Live Arcade for Xbox 360 beginning Wednesday, Feb. 28, at 0800 GMT (1 a.m. PST).

“Alien Hominid HD” will be available worldwide for 800 Microsoft Points and is rated T for Teen (Blood and Gore, Cartoon Violence).

Game Features:
Sixteen levels and seven mini-games, including “All You Can Eat” and “PDA,” now with online multiplayer support
Main and Mini-games high scores are tracked on the Xbox Live Leaderboard
Multiplayer modes enable two players locally in the main game and up to four players offline or on Xbox Live in Mini-games.
Earn up to 12 Achievements and 200 Gamerscore points

This is great and all, but I just want to know when Castle Crashers is coming? I gots to have that.