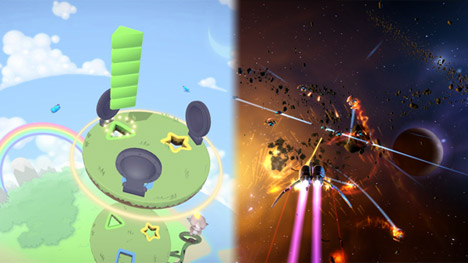 Two games are prepped and ready for action on Xbox LIVE Arcade this week, the first being Aces of the Galaxy (800 Microsoft Points), an on-rails shooter. The second is a puzzle game named Roogoo, which will also be priced at 800 Microsoft Points.

Aces of the Galaxy promises to be an “old-school arcade thrill-ride.” With local and online co-op, crisp visuals, and the ability to go into slow-mo mode during firefights, it just might live up to its own hype.

To be honest, Roogoo didn’t look all that appealing to me until I heard multiple testimonies about how wildly addictive it is. Sure, the concept of the game is pretty straightforward — match falling peices with the appropriate hole — but sometimes the simplest of puzzle games end up being the best.

Are any of you thinking of checking Roogoo or Aces of the Galaxy out?