[Editor’s note: pendelton21 kicks off this month’s Monthly Musing theme with the original Rampage for his A Time to Destroy piece. — CTZ]

When having any sort of discussion about destruction in videogames, you have to start at the source; the one game that introduced the idea of doing nothing but leveling city streets and destroying entire buildings in one punch. I’m talking, of course, about the legendary Rampage game series. This is THE building-destroying, radioactive-monster-controlling, people-devouring game we’ve all come to know and love. And, for me, this game epitomizes the idea of total and utter destruction.

For those that don’t know, Rampage is an arcade game where you, as either Lizzie the woman-turned-radioactive lizard (always my choice), George the King-Kong-rip-off, or Ralph the giant werewolf, go through the best parts of the United States (such as Gary, Indiana and Estes Park, Colorado), pretty much doing what the game title implies. You tear apart buildings, eat the people and their food, and cause as much wanton destruction as possible.

As a kid, this game was my life. I actually played roughly three to four hours of this game every day for almost two years. There was something so beautiful, so primal and fun about taking control of a radioactive monster and laying waste to ENTIRE CITIES. My mother would have to physically drag me away from my console for dinner, since I was just enamored with making sure I leveled each building in the best way possible. My normal method of destruction was punching out the bottom level of the building, then taking out every other floor, until either the whole structure collapsed, or I made it to the top of the building, where I would proceed to jump up and down like a lunatic until the pixelated steel and concrete came crashing down.

The dumbest thing I did as a kid was trade in my NES, because I wanted an SNES so badly. I had lost my favorite game forever, all because I wanted to play Chrono Trigger. But, thankfully, a few years later, I received an N64, and happiness invaded my household once again: I got my hands on Rampage World Tour. 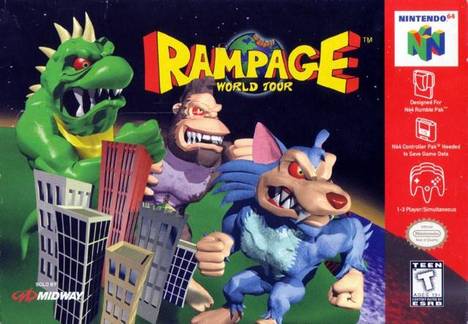 This game truly made my love for toppling buildings that much greater. The one important change this game had was many, many new cities to dismantle, including my hometown, Toledo, Ohio. I actually played this game more than the original, based on the fact that I could play in Toledo. Imagine yourself in my situation: you’re a kid, playing a game, where you get to DESTROY YOUR HOMETOWN, or, at least, what a game programmer thought your town might look like. I was hopping around buildings, imagining I was really downtown, eating Mayor Finkbeiner, laying waste to the WTOL-11 news office, and ravaging the Fifth-Third Center. With all of the new cities the game added, all I could think about was other kids that had the opportunity to devastate their hometown that no one had probably ever heard of before. This made me happier than I ever thought a game could make me.

Aside from the new cities, the game also introduced my favorite power-up form in gaming, V.E.R.N. The Violent Enraged Radioactive Nemesis was a form you took if you happened to find a barrel of radioactive material in any of the buildings you tore down (since, of course, every major corporation and office building has oil drums of spent uranium lying around). Once the radioactive material is consumed, you become a huge, flying, fireball-hurling monstrosity, making destruction that much easier. While it was rather hard to find this power-up, the reward was grand; zipping around the level, setting everything you could on fire, and crushing buildings in one punch made me cackle like a mad scientists examining the fruition of his greatest work.

When it comes to destruction, there is no better game than Rampage. Thankfully, for all the PS3 owners out there, World Tour was released for download on PSN (360 owners, cross your fingers for a XBLA release). So you too can get your hands on this amazing game. Just try not to eat me when stomping through Toledo.