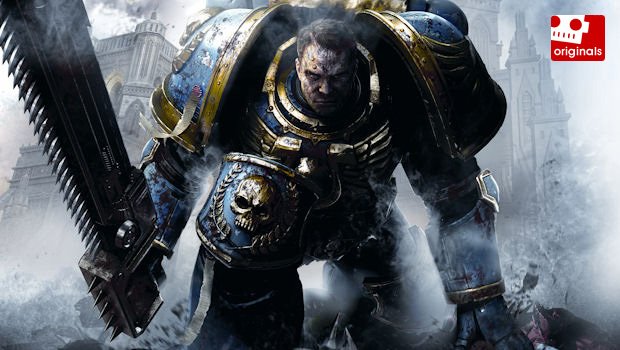 Warhammer 40,000: Space Marine is almost upon us, and it’s looking set to be quite good indeed. I’ve long been enthralled by Games Workshop’s expansive universe, and have thirsted for more videogames over the years.

While the property’s tabletop roots make strategy games like Dawn of War a natural choice, I really wanted a solid action experience. Warhammer 40,000: Fire Warrior was a fun first-person shooter, but the choice of a Tau as a protagonist was odd, especially when everybody really wants to be a Space Marine.

It’s taken exactly fourteen billion years, but finally we have a game where we get to play as the Emperor’s Finest. If you don’t know why that’s exciting, you have some learning to do.

Think of your favorite videogame protagonist. A Space Marine could beat it up. Not even a particularly powerful Space Marine, like Captain Titus in Relic’s upcoming game. I’m talking about Novices, the ones fresh out of training and ready for battle. A new Space Marine recruit has cooler armor than Master Chief, features more muscles than Marcus Fenix, and has been augmented more times than Adam Jensen before he’s even had his first real fight.

Space Marines are selected from across the universe, which, in Warhammer 40,000’s depiction, contains hundreds of human-populated worlds with a wide variety of harsh environments. Billions upon billions of humans are considered for recruitment, and of those, only a handful actually get chosen. Before they’re subjected to genetic enhancement and brutal training, they’re already ridiculously outstanding examples of human accomplishment.

One selected, the recruits are then physically altered and brutally trained. Genetic alterations include a second heart and a pair of backup lungs. They get nineteen new organs in total, and a number of their bones are fused together to provide greater protection to the insides. They can survive and recover from the kind of wounds that reduce DOOM‘s so-called “Space Marine” to bloody gibs in seconds. They can breathe underwater and inhale toxic gas, because why not? They can also hibernate if they like.

Then, of course, we get the Power Armor. It’s cooler than Master Chief’s glorified bicycle helmet and makes what is already a twelve-foot-tall, bone-fused genetic freak considerably bigger and more intimidating. They have mechanical muscles inside that, once bonded to the Marine, feel as light and natural as normal flesh.

In short, a Space Marine is basically fan fiction that human beings have written about themselves. The ultimate Mary Sues, Space Marines are so perfect it makes you want to throw up. Granted, they’re also massive dicks who think a half-dead guy glued to a chair is some sort of god, but they’re pretty damn good at what they do. They also have swords with chainsaw blades on it, which is cooler than the chainsaw bayonet of Gears of War because it’s even more ridiculously redundant.

As said earlier, this is all before a Space Marine gets anywhere close to being experienced. They’ve already suffered more physical trauma than most videogame protagonists put together before they’re even given a bolt pistol, but the ones that actually live long enough to become veterans (and Space Marines can live for at least 500 years) are the really scary ones. They fight Orks, slavering daemons, undead metal skeletons, and even other Space Marines — the Chaos-tainted ones that are a million years old and backed up by reality-shifting Gods. Unlike most videogame heroes, who go up against a single villain, the Space Marines are beset on all sides by aliens, monsters, and space elves.

Compared to that, Mario looks like a pussy for having so much trouble with a shitty little turtle.

That’s pretty much why it’s awesome that we’re finally getting an action videogame starring the Space Marines. They’re basically better than you and everybody you’ve ever looked up to. If they punched Nathan Drake in the face, his face would become a rich, warm soup as eyeballs, hair and skull disintegrated into screaming paste. If a Space Marine kicked him in the bollocks, he’d suffer total body disruption and paint the walls as little more than squirming, gibbering ketchup.