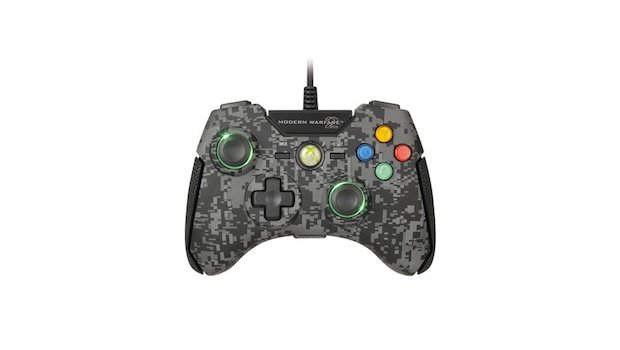 If you’re seeking a clear Modern Warfare 2 advantage, the Mad Catz game-themed Xbox 360 controller won’t give you one. Customizable button configurations are no substitute for a turbo-fire mechanism, much as its flat design and punchier triggers are no substitute for player skill. That’s not to say this branded controller isn’t a good one. It is. I’m just not sold on the user need for it.

Despite possessing an overall less curvy design and more expansive triggers than the official Microsoft controller, I’ve yet to discover a change in the way I play MW2 or roam the controller’s face and backside with my fingers. It’s too similar — the button spacing and response times (despite the girth of the triggers) are the same. I have found that I’m no quicker or more efficient in MW2 with this peripheral versus play with my standard controller.

That said, this controller does offer a unique look. The digital camouflage speckles and the massive black rubber side-grips are pleasing to the eye. The green LEDs below the thumbsticks is a nice touch, making nighttime play something like a rave without the loud music, candy kids, and LSD.

On the minus side, this is a wired controller. It does sport a huge threaded cord, though, so no need to be worried about the length unless you’re playing MW2 from row 50 in the new Dallas Cowboys stadium.

Other than the LEDs and the paint, the controller offers on-board customizable button configurations that once programmed negate the need for the button assignment options menu. I’ve yet to discover why a person would need this sort of functionality. The default scheme the game offers is flawless.

I like the controller, but I’m not a huge fan of its flatness — I’m just used to the curves of the standard controller after years of extended use. I’m also not a huge fan of the carrying case it comes with. It looks cheap and seems rather pointless. The last time I checked, controllers were durable enough for travel. Still, if you are in the market for something that looks different and sports the logo of your game of the century, you may want to give this a look.

The Call of Duty: Modern Warfare 2 Combat Controller for Xbox 360 is available at the Mad Catz online store (as well as other places) for $49.99.