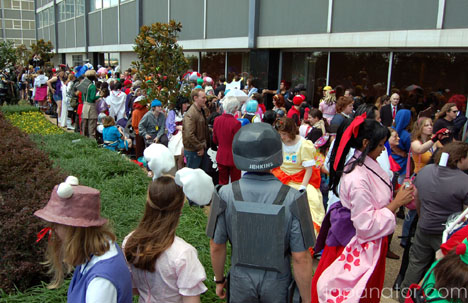 Sister site Japanator recently ran the story that Project A-Kon, America’s oldest anime convention, set out to break the Guinness Book of World Records record for the “Most Video Game Costumes in One Place.” We knew it wouldn’t be a problem, as the previous record was set by 80 British Marios. But we showed up anyway to cover the Dallas, Texas event.

While final totals aren’t in yet, I think it’s pretty safe to say that A-Kon 19 demolished the previous record. The forms and entries are still being tallied by officials, but it is estimated that over 600 cosplayers contributed to this new record.

When we arrived at the designated meeting place for these record breakers, queues of cosplayers were already so backed up that even the elevators had lines. Three judges, including Johnathan “Fatal1ty” Wendel, were present to oversee the procession of videogame-costumed attendees.

The convention did not expect this big of a turnout. It was only a matter of time before fire marshalls were called in, as the meeting ballroom was well past capacity. Even then, more continued to file in. Eventually, the whole thing was moved to another room.

Check out the gallery below to see how it all went down, as well as several other cosplay pictures from A-Kon 19. The costumes ranged from incredibly sexy to terribly horrible. We were going to categorize them, but we’ll let you be the judge. There are plenty of gems in the mix.

Special thanks goes out to Japanator’s photograher, Chris Serani, for his outstanding work. For those interested in the rest of A-Kon 19, be sure to check out Japanator’s coverage, which includes a super sexy Naruto and crotch shots!

Filed under... #Anime#Cosplay#Japanator#Things gamers do