Never pay more than 20 bucks for a computer game

Oh no! It’s the end of our three part interview with Ron Gilbert and Gary Winnick, creators of Maniac Mansion and the masterminds behind Thimbleweed Park, a game that has currently raised over $500K on Kickstarter. We didn’t learn that David Fox, the creator of Zak McKracken and the Alien Mindbenders, was on the team until after this interview was over. Otherwise we would have included him in this interview too. Sadly, it’s too darn late for that, as the Kickstarter has less than 24 hours to go until it’s all over.

The campaign recently hit the stretch goal for full voice acting, but it’s still far off from the iOS/Android goals. It’d be a big deal if they got there, as it would open up their potential audience by at least a few hundred people, maybe more if Apple could just figure out how to properly market the iPhone. C’mon Apple, when are you going to learn how to properly promote your brand?

We talked to Ron and Gary about why those smart phone stretch goals are important to them, the potential for console ports, fetishes, being otherwise unemployable, Joe Flaherty, and a lot more. Thanks again for the interview gentleman, and for returning to the style of game design that helped me to fall in love with the medium all those years ago. I’ve been waiting for you two to get the band back together since I was 12 years old. Now let’s just cross our fingers and hope that you can live up to 25 years of built-up expectations.

Dtoid: On Sup Holmes a little while back, Ron talked about how Blazing Saddles was one of the inspirations for Monkey Island 2. Any inspirations like that for Thimbleweed Park?

Gary: Thimbleweed Park is a satire and parody of shows like Twin Peaks and David Lynch, X-Files and True Detective.

Ron: Gary and I both like humor that is a little bizarre. Game humor works well when it’s drawn not only from the characters and the dialog, but also from the world. Seeing odd things that tell their own funny story. Seeing something in the background that makes you chuckle and adds to the world. Like the chainsaw hanging in the kitchen. It was just there and it helps tell the story of the world.

Dtoid: If you could make a live-action TV show of Thimbleweed Park, who would you cast? (Hint: Joe Flaherty needs the work.)

Ron: I never like to think about actors when I’m creating or writing characters. If I get someone in my head, then the character becomes them, or some other character they played. I’d rather characters were blank slates. Once the game is done, I can start to think about it, but never before. Some people have compared the two agents in Thimbleweed Park to Mulder and Scully on the X-Files. I don’t know that if we’d thought of that before because their personalities are so different. If we had, then they would run the risk of just becoming those two characters.

Dtoid: Do you have an ideal audience for Thimbleweed Park? Kids? Republicans? Normcore Enthusiasts?

Ron: What’s a ‘normcore’? Seriously, I have no idea what that is. It’s not some kind of fetish thing is it? Like being a Republican?

Gary: We’re planning on having two difficulty levels: A harder more traditional old-school point & click graphic adventure mode for savvy adventure gamers, and an easier ‘casual’ gaming mode which will be more accessible. So I’d like to think we’ll have something for everyone ‒ Democrats, Republicans, and Kids alike. 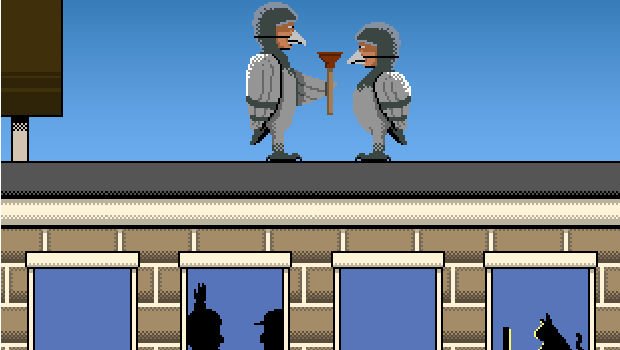 Dtoid:  For many of today’s youth, the iPad/iPod/iPhone is the only game console worth owning. For a lot of your fans in their 20s and 30s, consoles are the place to be. Any thoughts on how to approach those markets with Thimbleweed Park?
Console ports maybe? A mini version of Thimbleweed Park for Apple devices to help suck them into the PC/Mac/Linux game? Something else?

Ron: I do most of my gaming on an iPad, so this is a question very dear to me. Due to the roots of Thimbleweed Park, we felt that it needed to come out on the PC first. We have a stretch goal for the iOS/Android ports that hopefully we’ll hit. Getting onto consoles is also something we’d like to do and will start exploring that when the game is a little farther along. We know how we’d adjust the UI for touch and controllers, and it will be something we pay close attention to during development. Nothing worse than a crappy port.

Dtoid: There are a lot of easier jobs in the world than independent videogame developer? What keeps you two going?

Gary: I love the process of telling stories with characters and have worked in comics, animation and video games. One of the nice things about a video game the scale of Thimbleweed Park is that it’s mainly going to be me and Ron, we’re the core creative team and we’re in charge of developing a story we want to tell.

Ron: I don’t know how to do anything else but make games. I’m basically unemployable in the real world.