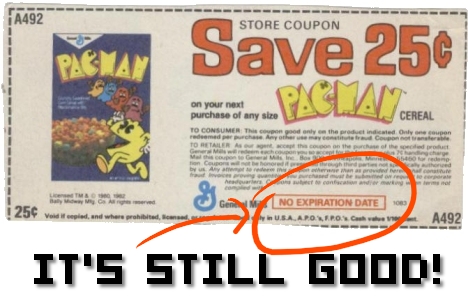 Last week, Mr. Concelmo started a conversation in the editors’ email inboxes about cereal that ended in a post to the front page of Destructoid about Nintendo Cereal System. Many gamers have fond memories of the cereal, while others remember that it actually didn’t taste all that great (the fruity Mario side eclipsed the berry Zelda side, to this youngster’s taste buds).

At the risk of sounding extremely dorky, cereal is something that I have had an odd fascination with throughout my life. Perhaps it is because I have practically always lived off of the stuff, but there is something about the history of cereal and how closely it has always been tied to pop culture that is extremely interesting to me.

As many of us are well aware, cereal is the lifeblood of many a child. As such, cereal manufacturers are prone to slap the stars of the latest cartoon or feature film onto a slightly modified pre-existing cereal and market it as a special themed cereal. As many cartoon and movie cereals that have appeared on the market over the years, you would think that there would have been at least a dozen different videogame characters who would have had their own by now. Unfortunately, this is not the case.

Nintendo Cereal System is just one of many video game cereals that we have been blessed with over the years, but the number has remained suprisingly quite small. Read on for the short but illustrious history of videogame-themed cereals.

The original Kongs were very fortunate, as they both got their very own cereal. Donkey Kong Cereal was a lot like Cap’n Crunch, which leads me to believe that they were most likely delicious. Unlike the blobs that attempted to emulate Mario and Zelda’s shapes, Donkey Kong Cereal kept it simple by featuring only one shape — barrels. These are only slightly more round than Cap’n Crunch bits. If it were Quaker who manufactured the cereal, I’d go so far as to say that they just put the good Cap’n’s cereal in a different box from 1982 to 1983.

Ralston made these two cereals in addition to Nintendo Cereal System, and there are stories that a Q*Bert Cereal existed (a release that is likely to remain an enigma for the remainder of time, as I can find no proof that it ever really existed). But ever since the Videogame Cereal Boom of the early 1980s, not many companies have followed suit, even with the ever-rising popularity of videogames.

The only videogame cereal to come out in the 1980s that was not made by Ralston was General Mills’ Pac-Man Cereal. This cereal was a fairly safe venture, as it involved marshmallows. Children will eat even sweetened cardboard if there are marshmallows tossed in, which is often the case. The marshmallows of Pac-Man Cereal were standard fare. They were shaped and colored like the four famous ghosts, Pac-Man, and even Ms. Pac-Man. The rest of the cereal was comprised of round corn puffs that closely resembled sugar-coated Kix in both appearance and taste. The cereal came out in 1983, and though it was only available for a limited time, it went through a few revisions where new marshmallows were added (namely Super Pac-Man).

During the peak of the Pokémon craze (2000), Kellogg released Pokémon Cereal. Like Pac-Man Cereal, and most other licensed character cereals for that matter, it was a marshmallow cereal. Pokémon Cereal was closer to Lucky Charms in that its normal bits were toasted oat rings. The marshmallows were shaped like Pokémon, but only the yellow Pikachus were expected. Several Pokémon of lesser popularity appeared in marshmallow form: blue Poliwhirls, green Odishes, and purple Dittos were thrown into the mix. For seemingly no reason, Marril and Articuno appear on the cereal box, along with the characters who are actually in it. I vividly remember seeing this cereal in the supermarket and being excited to see a Pikablu. Sadly, this limited edition cereal disappeared before I ever got to taste it, but it did have enough time to have an updated box with a Pichu in place of Pikachu.

A similar web-based game also got its own cereal about six years later. Neopets Islandberry Crunch Cereal was manufactured by General Mills and released sometime in 2006. It was basically Trix stripped down to only two colors/flavors that were based off of berries that exist in the Neopets world. To ensure sales, these boxes included goodies like Neopets TCG cards and codes that could be used on the website. But anything that is strictly berry flavored does not last long, and Neopets Islandberry Crunch was no exception.*

Beyond completely overhauled themed cereals, there have been some videogame mascots to grace the boxes of already-existing cereals. Sonic the Hedgehog was one of the most prolific video game characters both outside and inside the box. Everything from Sonic-themed yoyos to pogs could be found as prizes throughout the early ’90s. Many Nintendo characters have had boxes and prizes of their own. Hologram cards, game tips, crappy board games to be cut out of the back of the box — Nintendo’s done it all, and with games and characters that do not have to do with the little fat plumber. There have even been videogames inspired by cereal.

To me, videogames and cereal mesh together just as well as the cliché of cartoons and cereal. With all the vastly different series and characters to choose from, we could have had some pretty interesting cereals made over the years. Video games are just as popular as any cartoon or movie, so why have the Cereal Gods not granted more videogame characters with their own cereal? Is it really that risky to make videogame-themed food products, even in a time where they have become as important a part of culture as other popular forms of media? I refuse to believe that this is true, but it sure does seem that way. Only games that the world in its entirety becomes obsessed with get their own cereal.

For now, I suppose I’ll keep dreaming of Bomberman Bomb-O’s and Castlevania Crunch. Perhaps one day, cereal manufacturers will realize all the untapped potential there is in videogame-themed cereal.

*It was a limited run cereal like the others. I just hate berry-flavored anything.