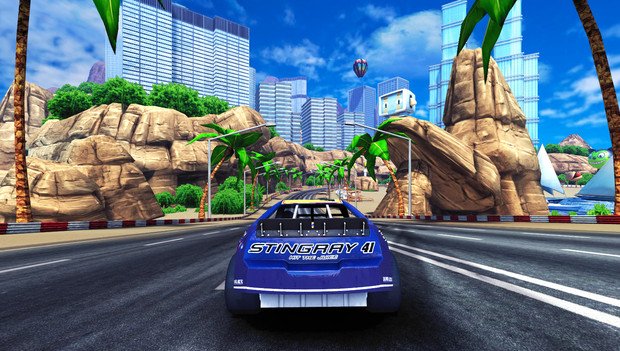 A developer’s diary from our community blogs

[Indie developer Tyrone Rodriguez of Nicalis took to our community blogs recently to give us an update on his latest project. Are you an indie dev? Share your story with us! –Mr Andy Dixon]

At this point, some of you may feel like we’ve been working on ’90s Arcade Racer since the ’90s. That’s not entirely true. While Antonis [Pelekanos] and I were indeed playing Scud Race (Super GT in the US) and Daytona USA some 20 years ago, that was just preparation for the game we’re developing now.

Here’s what’s been happening the last couple of months with ’90s Arcade Racer.

In the 100+ hours I’ve spent on racetracks combined with the thousands of hours logged playing racing videogames, there’s something that feels quite counter-intuitive to the genre. You would think super realistic racing games would have super accurate and lifelike physics — but that doesn’t necessarily always make a better product. To really give the sensation of speed, gravity, and lateral gravity, as a designer you end up removing many functions that make a vehicle simulation “real”, in the theoretical sense. A driving simulator more often than not feels like a floaty, unresponsive boat. Part of that is because you can’t feel yourself slinking around a bucket seat, you don’t have the sensation of a vehicle’s weight shift between the four corners; there’s an entirely missing dimension in racing games.

Antonis and I are going for a fun and arcade racing feel; we’ve said that from the start. Those two descriptors are equally important to the project. Getting to the balance of an arcade feel while offering a challenging experience and still giving the car some complex, real-world behaviors is where our own challenge begins.

Once you start playing a racing game, especially an arcade-style one, terminology like camber, caster, differentials, toe, torque and drivetrain are quickly forgotten. Initially I spent a lot of time trying to get an arcade feel out of a real vehicle simulation. After extensive experimentation, what Antonis and I found was that it just wasn’t working.

In this case it’s much easier to build something from zero and create an experience that perfectly recreates the perception and expectation we all have of a typical arcade racer. Version 2.0 of ’90s Arcade Racer physics is built within the expressed intention of creating a real arcade racing game. What that means is that the game is really feeling like should. The car reacts in a way that is indicative of an arcade racer, it moves and accelerates properly and now we have a really fun grip and drift mechanic within the game. Although it’s been challenging having to build physics from nothing, this has allowed us to really build the vehicles exactly how we want and how they should feel.

I’m pretty confident that we’re very much in the right direction with the physics and you’ll probably agree once you have an opportunity to play it. Antonis has been doing great work on creating the world of ’90s Arcade Racer; more on that later!