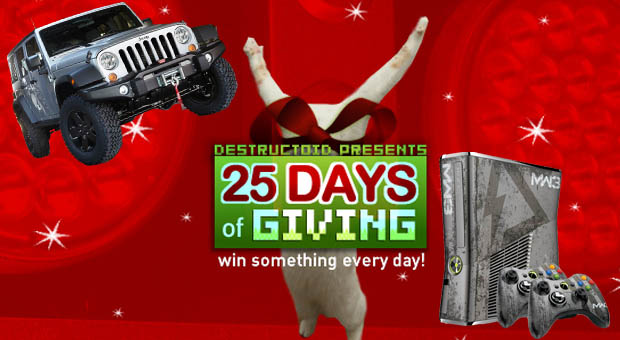 [Update: Contest over! Grand prize winner is imawesome. Runner-up winner is Paul! Thanks again to Jeep for all the great prizes!]

Destructoid’s 25 Days of Giving has begun and we’re starting off with a bang! We’ve teamed up with Jeep where they’re giving away a Modern Warfare 3 edition of the 2012 Jeep Wrangler. Yes, an actual car! You just need to go enter the over on Jeep’s sweepstakes page for your chance to win. Once you’ve registered, you’ll be taken to the Jeep Ops Missions game which will give you more chances at winning the 2012 Jeep Wrangler.

Jeep has given us an amazing prize pack to give to one lucky Dtoider and all you need to do win it is enter the Jeep sweepstakes on Facebook and then get into the Jeep Ops Missions game. Once in, you’ll need to send an email to contests @ destructoid.com giving us the answer to the very first question asked in the game. Mark your subject line as “MW3 Jeep contest” and leave a comment on this post stating that you’ve entered (don’t leave the answer in the comments!)

You have until December 12 @ 11:59PM CST to enter. After which we’ll be randomly selecting one lucky winner to give a special limited edition Modern Warfare 3 Xbox 360 320 GB console that comes with two controllers and a copy of Modern Warfare 3. The prizepack will also include a wireless headset, gaming chair, a Jeep messenger bag and a Jeep fleece, a total value of over $800! One runner-up with will win the Hardened Edition of Call of Duty: Modern Warfare 3 for the Xbox 360.

Contest is open to anyone with a US based shipping address and entries are limited to one per person. Good luck!