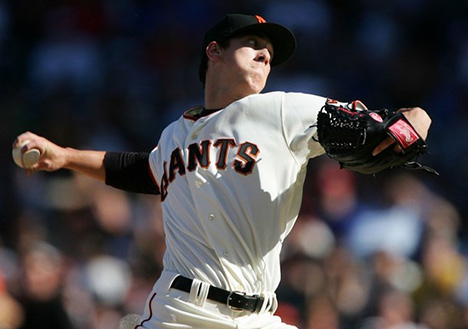 On Tuesday, it was announced that the Baseball Writers’ Association of America had chosen San Francisco Giants fireballer Tim Lincecum (that’s LIN-sih-come) as the winner of the 2008 National League Cy Young Award, an honor given annually to the best pitcher in the league. (The Cleveland Indians’ Cliff Lee was announced today as the year’s AL Cy Young winner.) In only his second season, Lincecum went 18-5 with a 2.62 ERA and a major league-best 262 strikeouts, making the NL All-Star team, even though his lowly Giants finished fourth in the NL West at 72-90.

Shortly after the MLB announcement, 2K Sports sent over a press release (after the jump) letting us know that they had picked Lincecum to grace the cover of the next installment in their baseball franchise, Major League Baseball 2K9. You can check out the high-res box art for the various versions of the title (PS3, 360, Wii, PS2, PSP) in the gallery.

New York, NY – November 11, 2008 – 2K Sports, the sports publishing label of Take-Two Interactive Software, Inc. (NASDAQ: TTWO), announced today that National League Cy Young Award winner, Tim Lincecum of the San Francisco Giants, will be featured as the cover athlete and spokesman for next year’s highly anticipated baseball video game, Major League Baseball® 2K9. Lincecum led Major League Baseball with 265 strikeouts during the 2008 season and set a new team record in the process. He has quickly become a fan favorite and established himself as one of the most thrilling young pitchers to watch in baseball today.

“Winning the Cy Young Award is truly an amazing honor, and now having the opportunity to be on the cover of Major League Baseball 2K9 is another dream come true and an absolutely surreal experience,” said Tim Lincecum, MLB All-Star pitcher for the San Francisco Giants. “Whenever I’m hanging out at home or traveling on the road, you can find me playing video games, and I’m definitely the best gamer in the clubhouse by far. I’m incredibly stoked that 2K Sports picked me to represent Major League Baseball 2K9, and I look forward to lending my baseball knowledge to the development process.”

“Tim is a special player and has the best stuff in baseball. We couldn’t have selected a more naturally talented and exciting player to represent Major League Baseball 2K9 next season, and given that he’s an avid gamer, it will be a lot of fun working together,” said Greg Thomas, senior vice president of sports development for 2K. “Visual Concepts has taken over the development of our Major League Baseball title, and we look forward to continuing to provide fans with the most authentic and high quality gameplay experience that we bring to all of our sports titles.”

Major League Baseball 2K9 is being developed by Visual Concepts, a 2K Sports studio, and is not yet rated by the ESRB. Major League Baseball 2K9 will be available in early 2009 for the Xbox 360® video game and entertainment system from Microsoft, the PLAYSTATION®3 and PlayStation®2 computer entertainment systems, PSP® (PlayStation®Portable) system, and Wii™ home video game system from Nintendo. For more information, please visit www.2ksports.com.