Running on the new Frostbite 3 engine, deeper integration with Battlelog

Tonight, Electronic Arts and developer DICE revealed Battlefield 4. The next entry to the powerful series is running on the new Frostbite 3 engine, featuring state of the art tech, and is more powerful than anything than DICE has ever created before.

In a surprising move, DICE only focused on the single-player for this premiere. It looks like the developer is taking things more serious this time, as Battlefield 3 had a very forgettable single-player mode. As for multiplayer, they’ll be talking about that down the line.

The visuals, well, the visuals are just mind-blowing. I don’t need to tell you this, though. Just watch the HD YouTube video of the 17-minute long presentation we were shown tonight. The demo was shown off on the PC (likely a high, very high end PC), and it’s safe to assume (although it was never explicitly stated) that this will be hitting the PlayStation 4 and next-Xbox. It has been at least confirmed that there will be a PlayStation 3 and Xbox 360 version, however.

Either way, we’ve finally reached a point where videogame gameplay looks just as good, if not better, than the CG sequences we’re used to with current-generation games. 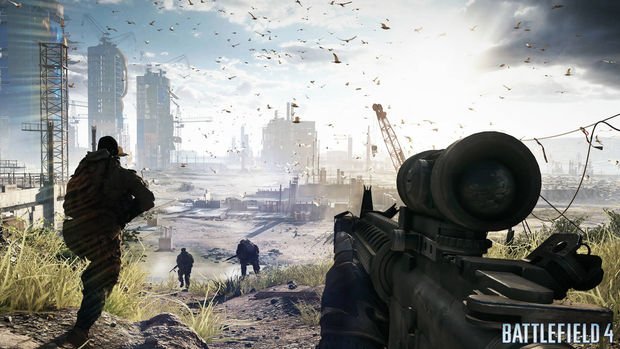 DICE wants players to have a very emotional connection with the story and setting they’re presenting. They want you to care, and really get involved as they’re creating a dramatic and believable story. There are a couple of examples of this during the video where you have to cut off a fellow solider’s leg, and then later leave him behind to drown so you can save yourself and fellow soldiers.

While multiplayer wasn’t discussed, there are multiplayer-like features being added into the single-player. Specifically the vast open environments mixed in with more claustrophobic areas, and more focus on vehicular combat. There’s also some focus on teamwork, as you’ll now be able to command your squad to attack enemies. Performing a command call also reveals all the enemy soldier’s positions with the orange headsup markers, similar to how it happens in multiplayer.

Other things I noticed in the presentaiton included how you can now hold up to three guns at a time (assault rifle with dual scope, shotgun, and grenade launcher), a more focus on including female soldiers, and that falling debris from giant explosions can actually hurt you.

Lastly, you’ll notice a couple of times when Battlelog appears on the top right of the screen. It looks like DICE is expanding on Battlelog to be more like the Need For Speed series’s Autolog features where you can challenge your friends at various objectives.

DICE didn’t reveal much else beyond what we got to see, unfortunately, but you can be sure we’ll be hearing way more as EA begins their marketing on Battlefield 4. In any case, this is our first real strong look at just how insane next-gen gaming is going to be.

EA has also announced that people that pre-order the game at participating retailers will receive the Premium expansion pack at no additional cost for $59.99 on current-gen platforms. There’s also going to be a Battlefiled 4 Digital Deluxe version for $69.99 exclusively on Origin that includes the base game, plus bonus in-game digital items. Those that pre-order this version will also gain access to the Battlefield 4 multiplayer beta.

Look for Battlefield 4 to come out this Fall 2013.