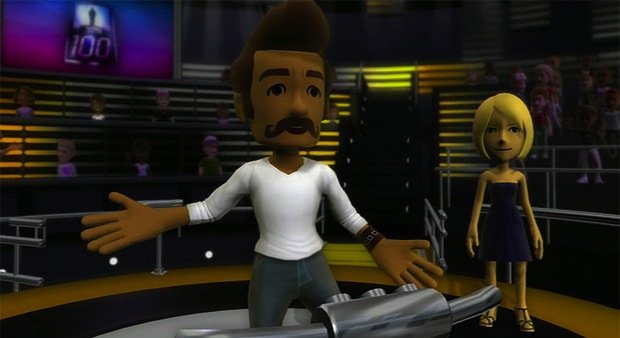 Plans are in the works for another 1 vs. 100 season. The Xbox LIVE Primetime downloadable seemed to be a success if the overloaded servers during each live recording of the social game show are any indication of impact. But don’t expect the same thing all over again — the team behind the game is adding little twists and tweaks make the game all the more better. In a latest posting on the game’s development blog, we’re observing that the game’s treatment of The One is receiving some love.

For example, the user selected to be The One will now receive a golden notification as well as an automatic “Busy” status on Xbox LIVE. Apparently, the special selected were being bombarded with media — requests and messages — as they tried to answer the questions and win big Banana Bucks.

The One will also receive a new entrance. No longer will he or she just pop onto stage — “their avatar,” according to the posting, “appears at the top of a staircase, just like the TV program.” To add a bit more zest, the crew is adding a pose once The One appears on this magical staircase of awesome.

These are small improvements, but crucial ones in the scheme of things. 1 vs. 100 is still a rad idea, but the presentation often killed the edge or the moment with its boring pans and sweeps. Among other things, we’ll be watching in the future to see if the team figures out a way to make the player, who rarely is The One or in The Mob, at least appear important during the course of the game. Eyes are glued.