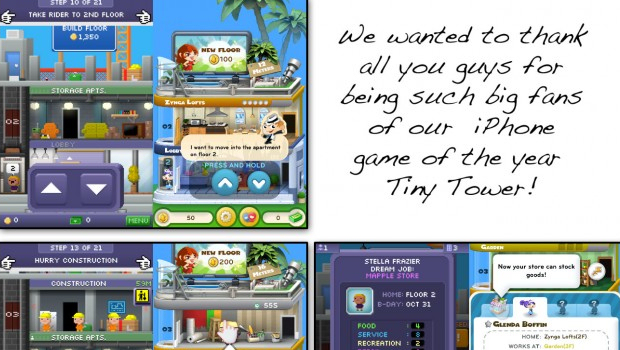 Zynga appears to have given up on copying its own games over and over, and has moved on to the straightforward plagiarizing of other peoples’ work. Dream Heights is Tiny Tower to the core, the only difference being Zynga’s inferior artistic direction.

Tiny Tower‘s developer, Nimblebit, has noticed the similarities and called out the 2,789-strong company in a wonderfully sarcastic way.

Zynga’s relatively short history already has a laundry list of legal tussles relating to intellectual property rights, seeing it on both the defense and offense. Like many successful game companies, it will protect its own rights doggedly, but has no problem shamelessly copying everybody else. Apparently that’s how you get ahead.