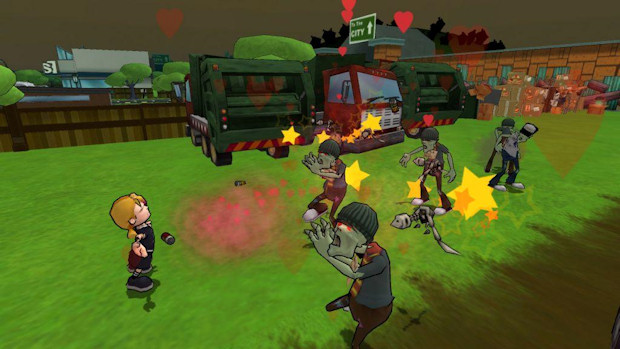 While much has been made of Ghostbusters, Brutal Legend and even WET, an Xbox Live Arcade game from Frozen Codebase also suffered at the hands of Sierra/Activision merger, ending up as the one of the evil publisher’s lesser known victims. However, Zombie Wranglers is back, and due to hit XBLA on May 6.

The cel-shaded zombie blasting game was all set for release back in September 2008 before having the plug pulled. Now everything’s straight and the game will appear next month. Previously, the game had the jump on all the zombie games that have flooded the market recently, but it may now get lost in between Burn Zombie Burn and Zombie Apocalypse, not to mention all the retail titles.

Still, it looks like it could be a lot of fun, so here’s hoping it does well. Now, what about this awesome sounding women’s roller derby videogame that Codebase was supposed to be working on?