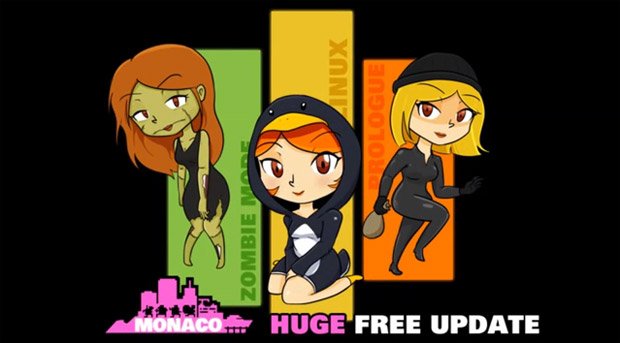 Time to boot up Monaco: What’s Yours is Mine. The overhead stealth title has received a substantial update, a port to Linux, and discounts. Starting the week off right, in other words.

The piece that’s got my attention is the new Zombie mode (funny how, in the right context, zombies can still be surprising) which “converts the entire original game into a zombie wasteland, with Bloaters and Wretches hungry for your CERVEAU.” Delightful. There’s also a mini-campaign dubbed Monaco Origins — it’s a set of backstories for the original cast of thieves. New features, like the Blonde class, have found their way in.

Pocketwatch Games meant it when a “ton” of free content was promised. If you’ve yet to nab Monaco, it’s currently on sale for 60 percent off, which works out to a final price of $5.99 (Win/Mac/Linux). That’s good on Steam and through the Humble Store.