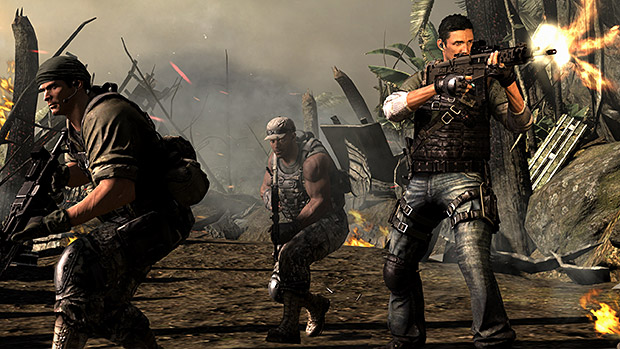 Between the development of the 2006 PSP title SOCOM: Fireteam Bravo 2 and the upcoming SOCOM 4, Zipper Interactive released one game: MAG, which launched just over one year ago to critical acclaim. That ambitious shooter set a new standard for online multiplayer on consoles with support for up to 256 players in one match, and I figured that the studio might have learned a thing or two that would be applicable to the development of SOCOM 4.

So I asked SOCOM 4 designer Ben Jones about what kinds of lessons the team took from MAG, and aside from the obvious — “on the networking side, we’ve perfected that technology, and we’re able to route a ton of players and get them into games super-quickly” — Jones noted that MAG taught Zipper a lot about how to design objective-based multiplayer modes.

“We learned a lot about what kind of objectives are necessary, what number, how to assign them, [and] how they [worked] with larger groups of players in MAG,” he told me. While Zipper “had an idea before” of how to implement objectives, Jones explained, the unprecedented scale of MAG allowed the studio to try “a bunch of new stuff” and “really [perfect] it.”

But MAG wasn’t the only source of inspiration and paradigms to follow for SOCOM 4. According to Jones, Zipper not only looked at its own previous titles, but also at other games within Sony.

Thank God for MAG. Because we know what SOCOM is, and we’ve done it for a long time, and I think we’ve done it really well. But in adding a lot of the new elements that we did, I think we looked to titles that we’ve developed internally … and said, “What are they doing that players have really latched on to, that has made the game better for them?” And [we] looked to incorporate some of those elements as well.

One of those elements is an increased focus on making the tactical gameplay of SOCOM accessible to modern shooter fans. For more details, hit up my preview. SOCOM 4 launches for PS3 on April 19th.