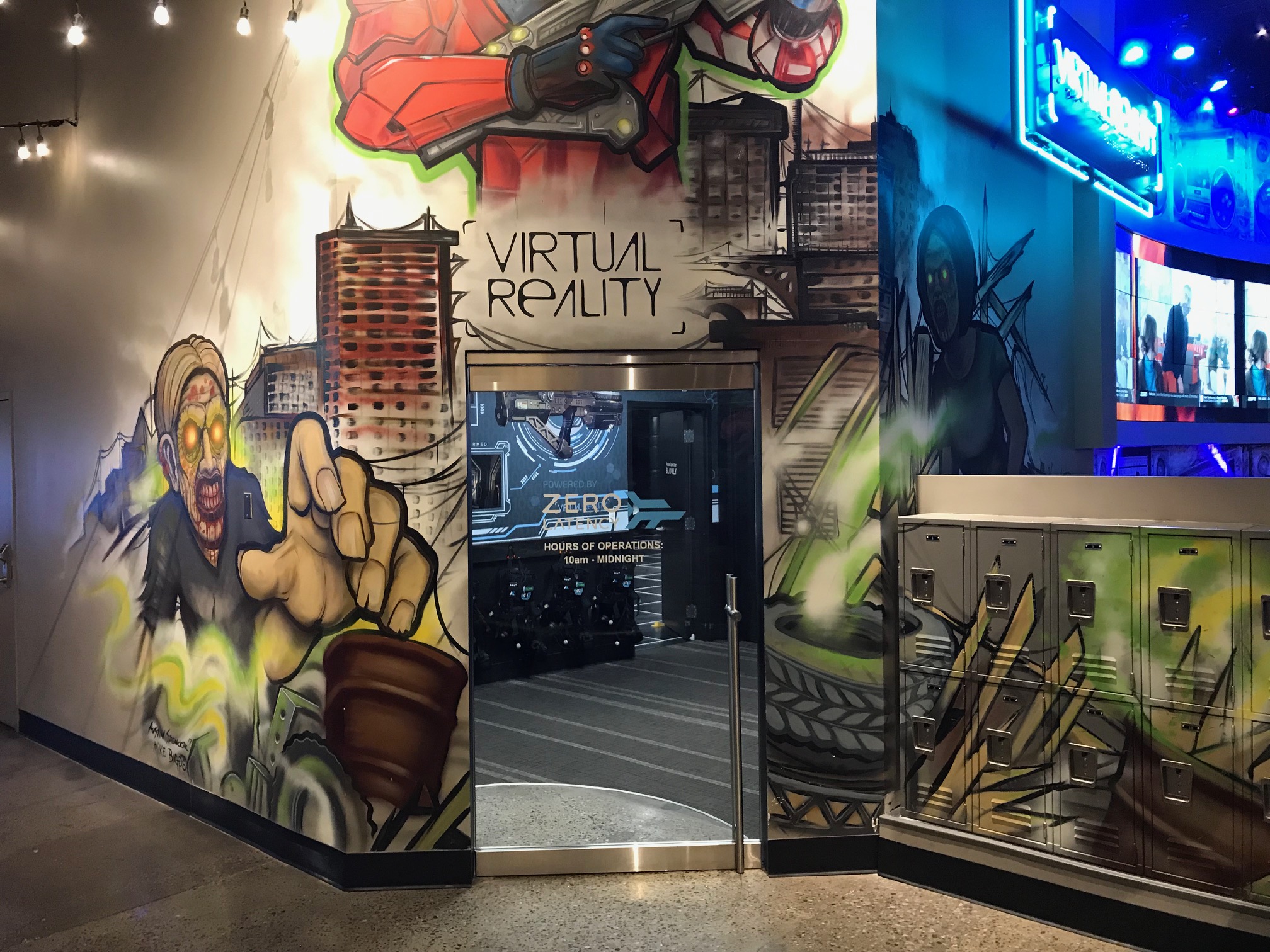 While I’ve been playing games my whole life, in the past several years I’ve basically become an expert in VR. I own every major VR platform to date, including Oculus Rift/Go, Vive and PlayStation VR and have seen nearly everything they have to offer. I know a lot of you are probably like “so what?” but the fact remains there are a lot of great experiences out there waiting to be discovered.

All that said, I’m not oblivious to the hardships of VR adoption. The barriers of entry for VR are in some cases insurmountable, ranging from space, to cost, to plain old vision issues that prevent you from even enjoying the medium altogether.

It’s for those reasons and more that VR hasn’t really taken off in homes. But there’s still plenty of other ways to innovate.

Zero Latency’s “room scale VR experience,” where you strap on a VR headset and roam around a warehouse with other people with gun accessories, has been around for several years, though the company has been constantly tweaking their approach. I had the opportunity to give the whole thing a go at their Vegas location: bolstered by a brand new project they’ve been working on.

Next up on the agenda for the company is Sol Raiders, their PVP (player-versus-player) experience that they’re hoping will strike it big with a more competitive crowd. The idea is that in addition to the walk-ins looking to try VR for the novelty of it, Zero Latency is looking to capitalize on repeat players. Based on what I saw, I was inclined to try it again, so it kinda works?

Sol Raiders‘ setup involves an eight player team deathmatch (4v4) with objectives (mostly things you need to shoot/gather), set to open up across Zero Latency’s 24 locations worldwide. The gist is that you’re piloting a remote combat rig against other players in a sci-fi world in an effort to gather sol, the universe’s main energy source. The most impressive rigs aren’t in-game though, it’s the pack itself that allows Zero Latency to create something like this.

I spoke to current CEO and co-founder Tim Ruse over the phone while I was at the event get to the bottom of what makes all this tick. “Our platform is an OSVR headset that’s heavily customized,” he said. “We found that the generation of hardware didn’t work as-is so we tweaked it. We’ve entered a partnership with Microsoft and Intel for the next step. We’re an R&D company, it’s in our DNA, we have multiple teams looking at hardware and software, so we want to get this right and not be a one-trick pony.” In short, it’s an Alienware PC strapped to your back with a custom VR headset. And it works.

You’d think that people would bump into each other (or the padded walls) constantly but in roughly four hours of playtime that only happened twice, and it was a rather gentle affair. Walls are very well marked without being too obtrusive (a dotted red grid pops up when you approach one in-game), there’s a perimeter radar on your HUD that only appears if you’re in danger of running into someone: all tame but effective warning signs. The most important thing is that you can see where an avatar is in-game and simply walk around them, and there’s still a bit of leeway after that (Zero Latency says that the gun models are a tad larger to account for this). As long as you have any situational awareness you’re fine.

During my numerous Sol Raiders runs (which were best of three across three maps) I started to pick up new concepts. The first arena is simplistic in nature but has a ramp that kind of freaks you out at first as your brain is tricked into thinking that you need to high-step it up an inclined space. The second map was my favorite: an intimate affair with tons of doors that open and close in roughly five second intervals, allowing for some hilariously emotive reactions to popping one open and seeing someone standing right in front of you. The third was a bit more open with outdoor sniper towers and a hub in the middle with the objective housed within it: opening up all sorts of teamwork via baked-in voicechat. Don’t worry, your boy did you proud.

Ruse, who is based out of Melbourne Australia where the company was founded, notes that Sol is their “most ambitious title to date.” He clarified to Destructoid that it had a longer development cycle than the other games, clocking in at 15 months. It was born out of simply turning on friendly fire in their other games (which I had a chance to try and will get to momentarily). Ruse calls it “day zero for free roam PVP,” and says that there really isn’t anything like this on the market at the moment.

Given Ruse’s experience I wanted to dive right into the trials and tribulations of the VR industry at large. A lot of people simply don’t care about VR at the moment or are waiting for it to fail, but it just refuses to quit. Why is that? Well, because people like Ruse believe in it, even if he wishes studios took more risks. “It’s certainly been easier, he responds. “Some people who are curious about VR just want to try it. The benefit is that you get to go with your friends and you get the room and the tech. Removing the barriers like a mouse, keyboard or PC is huge.”

Following up, I pressed on why VR adoption has been so slow-going: “I think there’s a couple of bits to why VR has been challenged by the market. The VR industry thought they could move from the out of home to the in home experience immediately. In-home technology is expensive and limitations of space is a challenge in the home: so creating content with those restrictions in mind is important. I look at Beat Saber, it’s not a completely original idea but they really nailed it. We need compelling experiences like that, ones that are selling VR to people, out of the box concepts.”

It’s not all doom and gloom though according to Ruse: “I actually think it’s moving nicely, it’s just going to take a few more years than everyone thought. At least five years I think. Maybe 10 years for something like putting on a headset to play PUBG in a park. Just 16 months ago it probably would have been impossible to put together a full Zero Latency kit, all the tech is just coming out.”

Ruse also has another, perhaps more difficult endgame: to possibly cement Sol Raiders as an eSport. But while the term eSport is thrown around daily, he doesn’t want to rush into it or even force it: “Things that are developed with eSports start with a fantastic game. Then with passion they turn into eSports over time. I think we reached step one. You can’t just wake up one day put a flag into the ground and say ‘we’re on eSport.’ You can see the skills go up exponentially as you play it.”

Although Sol was the main event I did get the chance to play the three other games available at the Vegas Zero Latency location: Engineerium (a puzzle walking simulator), Singularity (a co-op sci-fi shooter) and Outbreak Origins (a zombie co-op experience). I think the former is best described as a casual team-building exercise: the perfect sort of thing for a group of friends to try or an event for a corporate retreat.

It’s incredibly simplistic as all you’re doing is walking (there’s no gun accessory or shooting of any kind), occasionally splitting up and depressing buttons or raising platforms in an effort to activate orbs as a group. It’s not something you’re going to ever want to play again but I had a grin on my face for most of it and my group was having a ton of fun with it.

As for Singularity and Outbreak, you can really see how far Sol has come looking at these older frameworks. There’s flashes of greatness in each. The former has a really cool section where you’re slowly walking across a really thin bridge to the other side while your team covers you from getting pelted by deadly floating drone fire. Outbreak sports a few harrowing moments, including some choice encounters with the always-present fear of heights. Ruse even had a story to share: “We had one person who was so cared of our zombie game that they fell to the ground, screamed and started ripping off the tech like it was a collection of spider webs.”

I think Zero Latency is onto something with Sol Raiders, especially as the tech continues to grow and evolve. The thing is, they need to convince a mass market that VR is worth their time: an uphill battle the company is willing to fight. As Ruse noted regarding their foray into eSports, that’s step one.

[Travel and lodging for these impressions was covered by Zero Latency.]