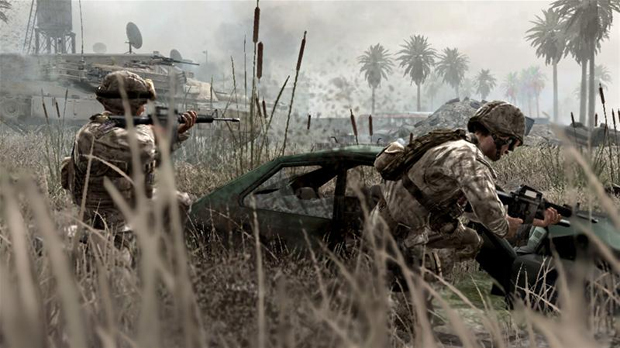 After a month of legal drama between Jason West, Vince Zampella and their former corporate overlords at Activision, the predictable has occurred. Announced in a press release today, West and Zampella have formed a new studio, Respawn Entertainment, and have established an exclusive publishing partnership with chief Activision rival, Electronic Arts.

I mean, really, we all saw this coming, right?

“Respawn Entertainment marks a fresh start for Jason and me,” said Vince Zampella in the release, followed by the traditionally positive statements which publicly accompany all new relationships.

It’ll be interesting, with all of this hub-bub, to see how active the new company is in poaching talent from Infinity Ward. No projects have been announced, as they’re really just starting to get the team together. How much do you want to bet that they make a military-themed shooter?

You can read the full release after the fold.

LOS ANGELES, Apr 12, 2010 (BUSINESS WIRE) — Today, Jason West and Vince Zampella, creators of the multi-billion dollar Call of Duty(R) franchise, announced the formation of a new development studio — Respawn Entertainment. The move positions the Respawn Entertainment leadership team as the owners of the intellectual property they create. The company will focus on creating state-of-the-art gaming experiences for global audiences. The studio is currently assembling a world-class team of designers, artists and engineers. Applicants can submit resumes to [email protected]

Respawn is pleased to also announce that it has awarded Electronic Arts (ERTS 19.49, +0.13, +0.65%) , through the distinguished EA Partners program, exclusive worldwide publishing and distribution rights to future games. Terms were not disclosed. West and Zampella are represented by Creative Artists Agency (CAA).

“Respawn Entertainment marks a fresh start for Jason and me,” said Vince Zampella, General Manager of Respawn Entertainment. “For the past decade we led a great development team and poured our hearts into creating an epic game franchise. We’re very proud of what we built — and proud that so many millions of fans enjoyed those games. Today we hope to do it all over again — open a new studio, hire a great team, and create brand new games with a new partner, EA.”

“We’re excited,” added Jason West, President of Respawn Entertainment. “Now that the team is in control of the games and brands, we can ensure that the fans are treated as well as they deserve.”

Frank Gibeau, President of the EA Games Label commented, “This is the start of a great publishing partnership — one that I expect will develop blockbuster game franchises. Jason and Vince are two of the top creative leaders in the entertainment industry. At EA, we’re honored to be their partners and to give them the support they need to hire a team and return to making incredible games.”