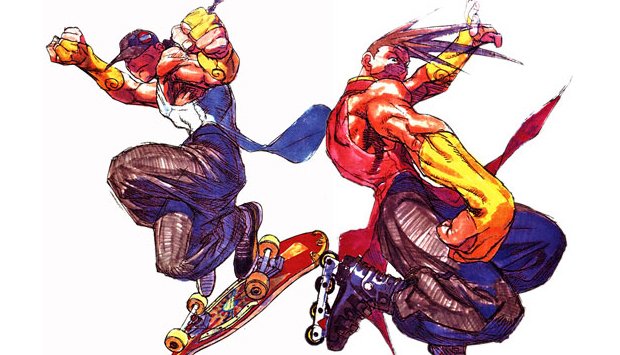 No, that not the “hint” above. That would be a full on reveal. The hint comes from the latest issue of Arcadia magazine, a Japanese publication focused on the modern day arcade scene.

The scan shows the silhouette of a skateboard and a pair of roller blades set beside some text teasing future characters of Super Street Fighter 4 Arcade. That’s a pretty big hint. Unless Capcom is planning to reveal two all new Streer Fighter characters that utilize these pedestrian forms of travel, then it’s got to be Yun and Yang.

This pleases me. From a “science of the roster” perspective, it may be a bit redundant to have Abel, Gen, Fei Long, Yun, and Yang all in the same game, though from a fan’s perspective, it’s still exciting to think that the SF3 twins may be on the verge of a comeback. It would be even better if they introduced a third brother to Yun and Yang, maybe an older, cooler brother on a segway…