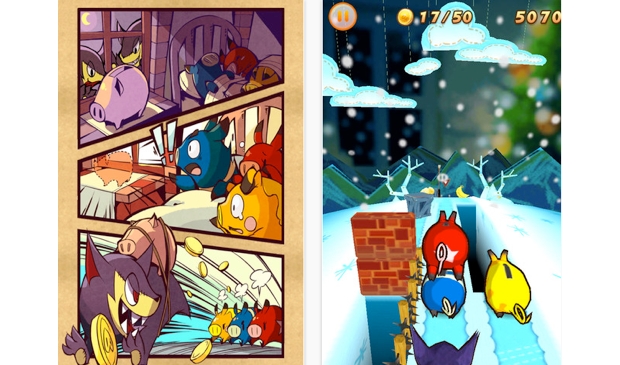 What’s Yuji Naka up to these days? After leaving Sega and Sonic Team as Sonic’s daddy, he started a studio named Prope. Ivy The Kiwi? is their top title so far. It seems like they’re filling in the holes with stupidly cute iOS games. Fluffy Bear was nothing to write home about, but holy crap was it cute. Their latest title, released today, is also pretty cute. No, actually, FlickPig is supercute. Even the story is cute:

Once upon a time, there were three little piggybanks who lived together in a big, brick house.
One night, while the piggies were fast asleep, a pack of wolves broke into their home and stole their precious stash of hard-earned coins from right under their little piggy noses! The piggybanks awoke to find their window broken and all their coins gone… The piggybanks hurried outside to find the fiendish wolves running off with their loot, leaving a trail of stolen coins as they fled.

I’d call this one a puzzle-racer. You flick the adorable little pigs across three lanes as the race after the wolves, working to pick up coins and avoid obstacles. They make the cutest sounds when you flick them, and even cuter ones when they run into something.

I played FlickPig a bit this afternoon and can tell you that it’s a fun little game. It starts out slow to let you appreciate the cuteness, but then quickly ramps up to really test your flicking reflexes. There’s 100 levels, but after playing about 15 of them I’m guessing that they’re all pretty similar. It’s only $0.99, though.