The victim of a true Injustice

When it comes to competitive multiplayer games, we all have our favorite characters and classes. In this series, I’m putting some of mine under the microscope to see what makes them tick, how they fit into their games, and ultimately why I like them! Check out the previous entries – Kotal Kahn, Reaper.

With Injustice 2 freshly released this week, it seems like the perfect opportunity to reflect on my favorite character for the first game. The evil genius himself, Lex Luthor.

Sadly, while all the Superman and Batman mains from the original game have been enjoying easy wins with their largely unchanged characters, I’ve had to start from scratch. My boy, the guy who made the first Injustice one of my favorite fighting games of all time, did not make the cut for the sequel.

As personally slighted as I feel by Lex’s exclusion, I can almost understand it. Lex was always an odd mishmash of a character. In a fighter dominated by powerhouses that could seemingly do it all, Lex always seemed a little out of step; a mere-mortal trying to keep up with the Gods. He was a character that relied on screen control, but was somehow worse at zoning than every other character with a projectile. Parts of his kit seemed geared to rush-down, designed to let him bully characters with powerful set-ups, but he was also bulky and slow. He could get up in someone’s face, then totally miss them with his goofy normal attacks like Mr. Magoo trying to swat a fly.

It’s no surprise that most players bounced off of Lex. But, what they didn’t know was that when played right, the mad man could be one of the flashiest and most exciting characters in the game with a style all of his own. 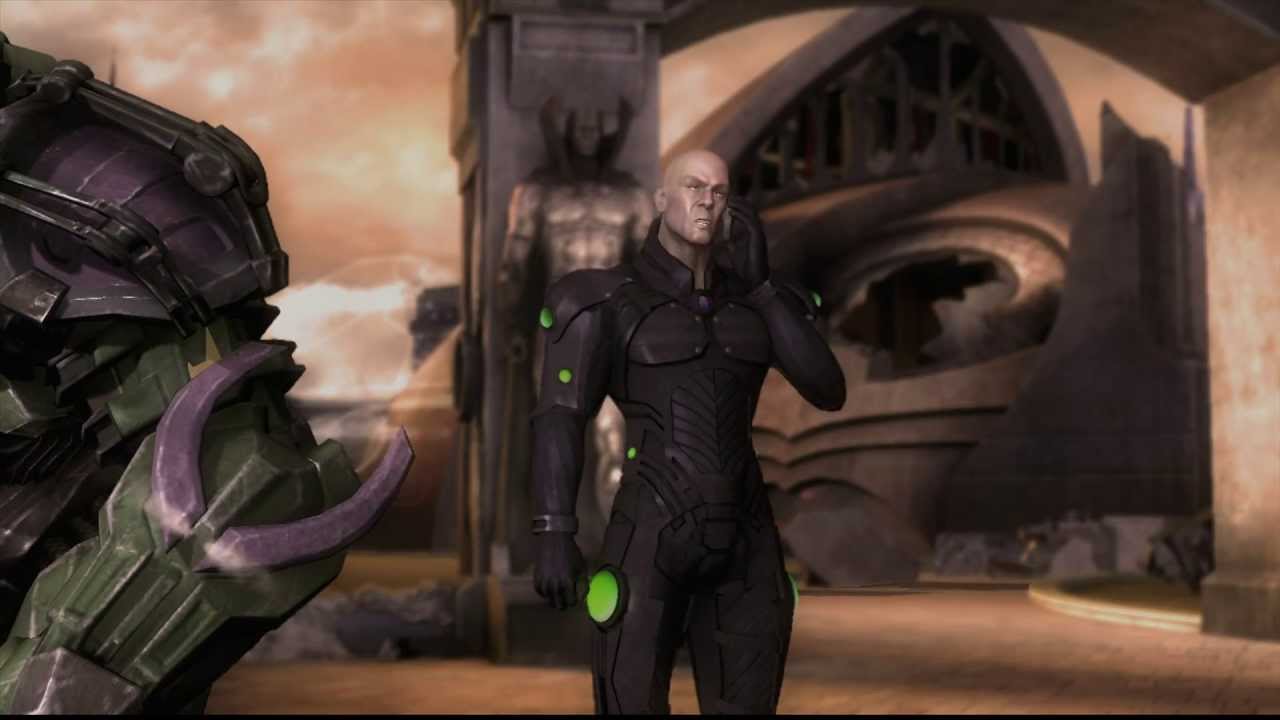 Bald man in a big world

Everyone knows Lex Luthor. Bald dude, hates Superman, evil. Played by Hollywood luminaries such as Gene Hackman, Kevin Spacey, and…well, Jesse Eisenberg (the less said about that performance the better). He’s imposing, but in the same way Steve Jobs was imposing – all money and ego, not muscle. Just putting him in a fighting game seems like an odd choice. Unlike other DC heavies like Darkseid and Mongul, Lex is a guy more used to hostile takeovers than throwing haymakers.

While Injustice already takes some liberties allowing relatively normal humans to go toe-to-toe with superpowered titans (by way of a nanomachines, OBVIOUSLY), Lex grappling Shazam to the ground in a tasteful Armani suit might have been a little too ridiculous to take seriously. That’s why he shows up in the ring clad in his signature power armor. A mini-mech that transforms the weedy, bald CEO into the single largest, bulkiest fighter in Injustice. My dude is so big he dwarfs the roided-out Bane and mountain of zombified muscle that is Grundy.

This is not an advantage.

Being the biggest character with the slowest dash is no good in any game, but especially not in a title that caters to projectile heavy zoners. Watching Lex try to awkwardly heave himself over eye-lasers like an asthmatic running the 300m hurdles is only entertaining if you’re on the right side of the laser beam. Not to mention his hitbox was so gigantic that several characters had “Lex-specific” combos for maximized damage that could only be used on the evil MBA. Never a good sign.

A deep bag of tricks

So, if he had so many disadvantages, what made him fun? To understand the unhealthy codependent relationship of being a Lex main, you have to look at his whole bizarre kit. Lex is a puzzle you have to solve. It’s like NetherRealm Studios designed every other member of the cast first – all the high-impact rush-down kings, the aloof Gods of zoning -and when they were done, flipped over the game design bucket and made Lex out of the spare bits and pieces that were left over.

Lance Blast – A projectile with an incredibly slow start-up and mediocre damage (I’d have to check, but I think it loses in a trade to every single other projectile in the game). It can be fired straight or on a vertical diagonal. Interestingly, it can also be held and charged for an unblockable close range blast, but if there was a use for it, I never found it.

Lex Probe – Lex can toss a little floating drone in the air that will fire a small laser a moment later. Deceptively useful. The Probe might not do huge damage, but it could be used as a ghetto combo breaker (think of Doom’s hidden missiles in MvC3) or to cover him while pulling out some of his other agonizingly slow moves.

Orbital Strike – An unblockable semi-tracking shot from above that does decent damage. Sounds great, but its start-up time roughly matches Grandpa trying to struggle out of his easy chair after hip surgery. On the plus side, the meter-burn version is much faster, raining down a barrage of missiles that can even juggle people in the corner.

Gravity Mine – Lex tosses a dinner-plate sized mine on the ground that hits low and electrifies opponents, serving them up for a nice juicy combo. It’s a great move that is made ever so slightly redundant considering half the cast of Injustice can either fly, or always want to stay at full screen anyway. Alas.

Gravity Pull – a mid-range quasi-projectile that sucks opponents towards Lex and blasts them back out. With meter, it works exactly like a high-tech version of Scorpion’s spear and is Lex’s go-to combo extender. Not super great in the neutral game, but can occasionally catch someone slipping.

Corps Charge – Lex uses his big robot suit as a projectile and flings himself at his opponents. Fantastic reversal move, super fast, resets the situation to mid-screen on a hit. It can even be used in the air to check jump-ins or close distance. It’s easy to punish on block, but what more do you want? This is Lex’s one unabashedly good move. 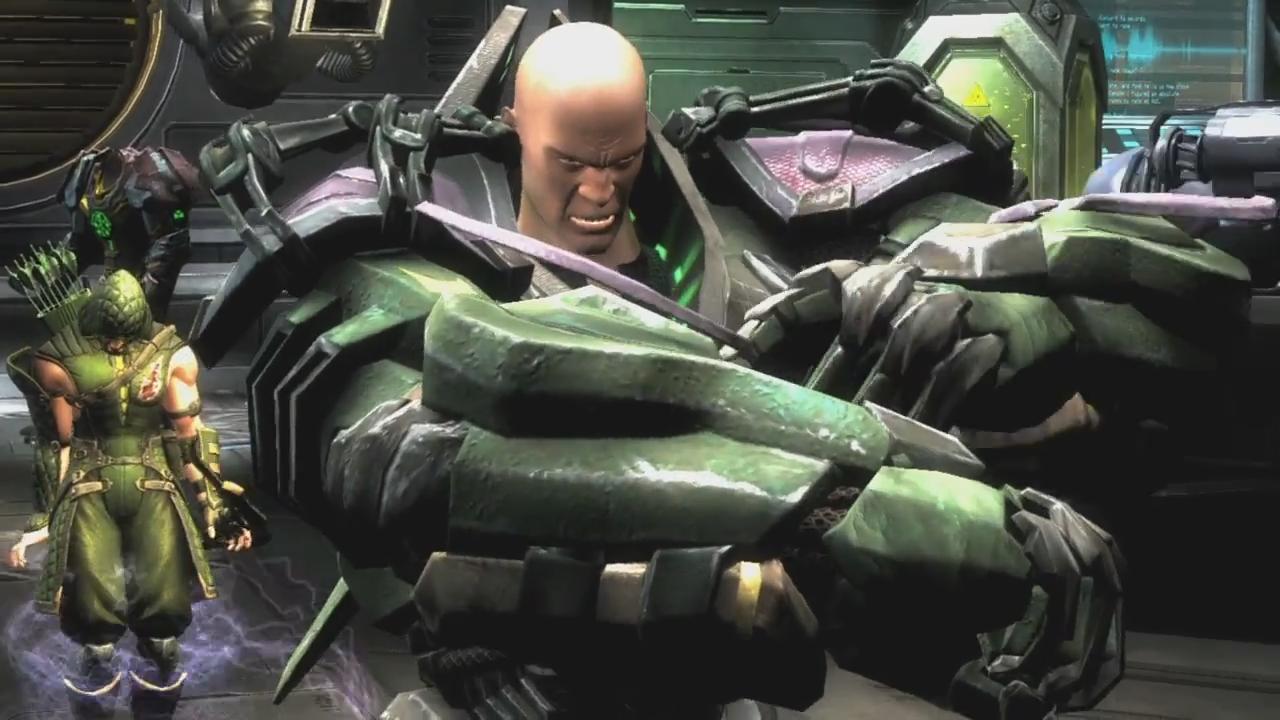 If that was his entire kit, I really believe Lex would be basically unplayable at any kind of competitive level. Individually, all of those moves have too many overt weaknesses and obvious counters that he could never really hope to get mutch going. But, the mad genius has one last trick. A trump card that ties everything together – the Energy Shield.

One weird trick superheroes don’t want you to know

Every Injustice character has what is called a “trait power.” An easy to activate ability or move that defines the character. Green Arrow can quickly fire an arrow or select one of his famous trick arrows with his. The Flash can slow down time for his opponent as if he was moving superhumanly fast. Lex’s is tasetfully understaded. His trait powers up a personal force field, giving him an all-important single hit of super-armor.

If you’re not a regular fighting game player, super-armor is a term that describes the ability to take a hit and not flinch. With armor, you can commit to a big slow move without worrying about getting poked out of it. It’s this slight bit of reprieve that completely changes Lex’s game and turns him from one of the weakest characters in the roster to one of the strongest.

If you’ve read the previous entries in this series, you might be noticing a pattern. I love characters that cater to huge swings and upsets.

The energy shield gives Lex the time he needs to either set-up his various traps, or take a risky read on an opponent without fear of getting blown up. It’s the cornerstone of his game plan. Playing Lex, most matches follow a similar pattern; play defensive, run away, pray to whatever god you believe in, finally score a knockdown, activate trait, GO WILD. 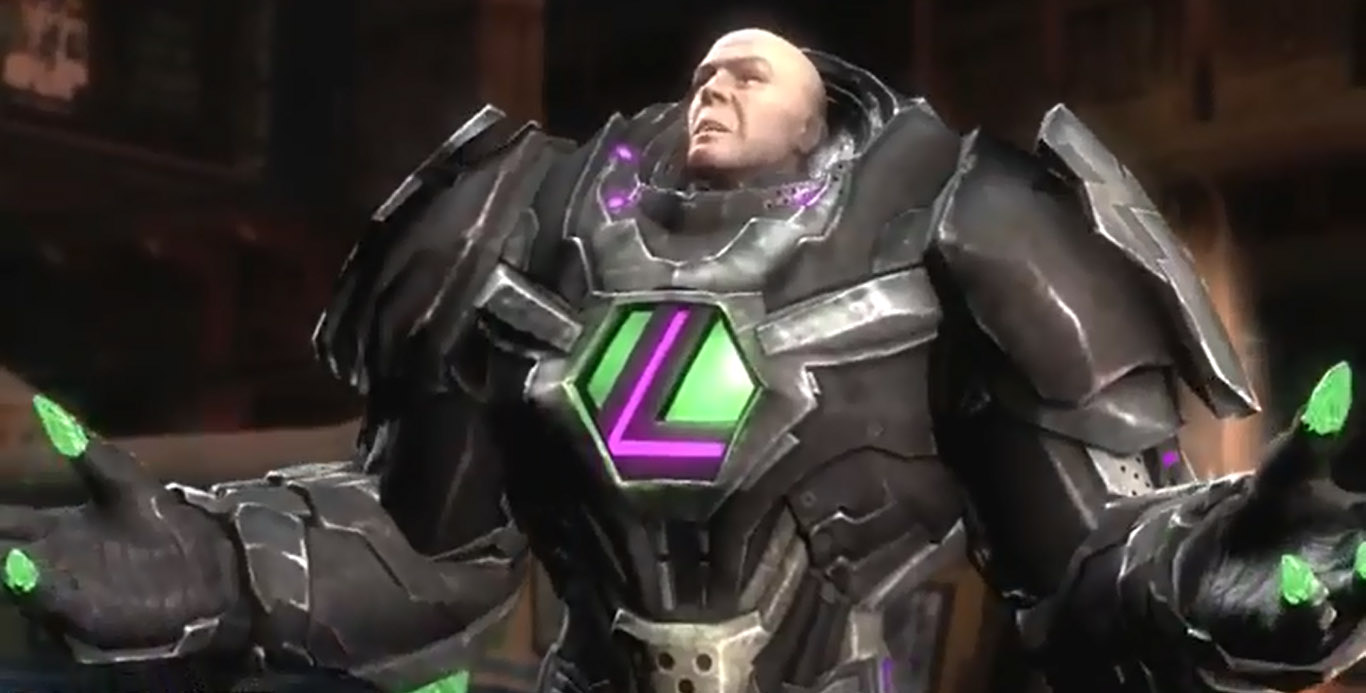 As soon as you have the breathing room to take a hit and keep going, Lex’s whole kit makes sense. Trait up and take the opportunity to toss out a mine and put the opponent in the hot seat. They want to jump in on you? Fine, take the hit, knock them back into the mine, repeat as many times as they’ll fall for it. They’re getting too scared to come in and are just going to hang back? Time to call in a laser from the kill-sat. Want to move in yourself? Toss out a probe and charge on in. You have all the advantage in the world to try one of Lex’s weird overhead attacks or stompy lows. With a hit of super-armor backing you up, you can afford to take some chances.

What I love most about this kit, other than the manic depressive bent of constant highs and lows, is how it works thematically for who Lex is.

Lex Luthor is supposed to be a genius; an egomaniacal visionary playing the long game for world domination. You would hope he had a more intricate plan for taking down the Justice League than just punching them really hard.

It makes sense that his playstyle involves carefully manipulating the situation and waiting for all the pieces to be in place before suddenly turning the tables on his foes. As far as expressing personality within the limits of a fighting game goes, I’d say NetherRealm nailed it as close as it could be done with Lex.

In fact, I don’t know if it was planned or not, but his kit even reinforces his unending hatred of Superman. Remember how I said every character has a trait power? Well, Superman, true to form, has a predictably boring but powerful one. His ability powers up all of his moves for a short time so they do more damage and break armor.

That’s right, the big blue demigod utterly destroys Lex just by pressing a button. One tap, and the smug Kryptonian can totally ignore the one thing that makes Lex a threat. Just like how he can ignore gravity, or bullets, or the very laws of physics, all because of a lucky fluke of physiology and solar radiation. How unfair. How disgusting. How completely infuriating to have to work so hard just to go toe-to-toe against someone who has it so easy. Who hasn’t earned a damn thing in his life.

Play enough Injustice as Lex, and you’ll totally get it. Superman is a jerk. An alien menace that must be destroyed. The rest of the world is just too blind to see it.