Many years ago, in a land far away, I used to have an office desk job. I didn’t have a cubicle — I was lucky enough to share a large office with one other person — but the life can become lonely and, during downtime, quite boring. It was at times like these that Flash-based games saved my life.

Sites like Shockwave.com featured a variety of simple, browser-based games that would help me kill hours upon hours. Most of them being variations of board games and puzzles, they helped pass the time; but as an avid gamer, the games were more shallow than the console (or even handheld) experiences that I had become accustomed to, and I quickly grew bored. During these troubled times, where in heck was Garage Games with their InstantAction platform?

Currently in open beta, InstantAction is a platform designed by Garage Games that is said to deliver “console quality” videogaming experiences streamed through a standard web browser. If you’re either chained to a desk, or if you find yourself in front of a web browser more than your television, InstantAction sounds like a godsend.

So I decided to sign up and take InstantAction’s available games for a quick spin. While I don’t see it replacing my Xbox 360 any time soon, Garage Games is already delivering some impressive gaming experiences inside a tiny Internet browser. Hit the jump for some game details and impressions.

(Note: I played all of the InstantAction games on my Destructoid work laptop, a Dell Vostro 1400, running Windows Vista, using Firefox version 2.0.0.13. Note that this is not in any way intended to be a gaming PC, but all games ran smoothly unless otherwise noted.) 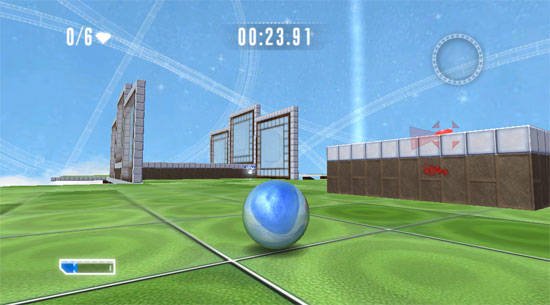 Having already paid for the Xbox LIVE Arcade version of the title, I was already familiar with this game, so it’s the first one I decided to tackle. Surprisingly — very surprisingly, actually — the InstantAction version of Marble Blast is nearly identical to the XBLA game I was already familiar with. From the smooth 3D graphics to the Kelly LeBrock-esque chick providing commentary, this is essentially the same experience that you’d find on the console … except for the controls.

This might be a point of contention for PC gamers, but I’m more comfortable with a controller in my hand than I am with the keyboard/mouse combo. It’s manageable, but if I had my druthers, there’s no question which one I’d choose. With InstantAction, you don’t have a choice — the games are browser-based and therefore, you’re going to be using a keyboard and a mouse. It’s that simple. But even being relegated to a laptop touchpad, rolling and making the marble bounce about the playing field was never really an issue.

Marble Blast Online not only contains all (if not more) of the stages found in the XBLA game, but it also supports real-time multiplayer modes like “Gem Hunt,” where players scramble to collect more gems than their opponent. 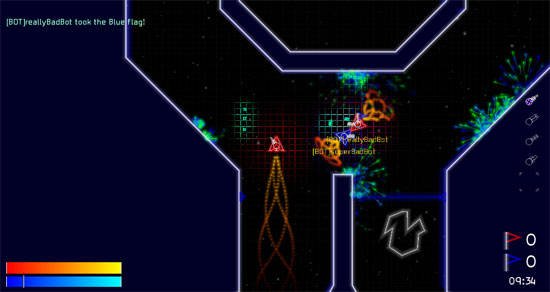 There will be no escaping the comparisons — Zap! looks a hell of a lot like Bizarre Creation’s Geometry Wars. But outside of the 2D vector graphics, the games really aren’t similar at all. Originally released as shareware in early 2005, Zap! is a multiplayer-focused top-down shooter in which you control a triangular spaceship across the game’s various maps.

The game has a number of different game-types — CTF, Hunters, Retrieve, Zone Control, and ZAP Match (deathmatch). Moving the little ship is done with the WASD keys, and you’ll aim a tiny reticle to fire. In some modes, like CTF, there will be a load-out zone where you can swap out your primary and secondary modules — Turbo Boost, Sheild Generator, and more. I played most of my matches against bots (I had a few errors connecting to hosts, and finally gave up), most of which were reasonably intelligent, but despite its simplicity, I can see this becoming quite the productivity sucker around the office. 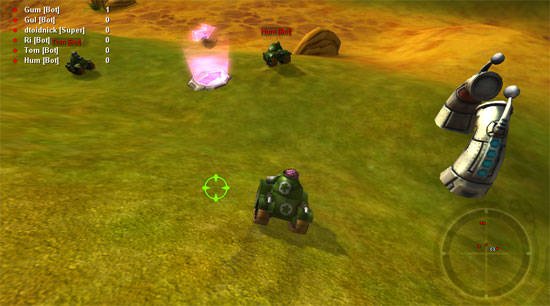 Despite a name that might lead you to believe that you’ll be playing a game that requires some thought, Think Tanks most certainly does not. The name comes from the fact that you control a tank that appears to be driven by a brain. Yes, sitting in the cockpit of each of the game’s six tanks (three of which are unlocked from the start) is a pink, fleshy brain. The concept is simple — move the tank around and fire at other brain-driven tanks. Battlemode is a simple deathmatch affair, and Scrum has you grabbing a flag and bringing it back to a goal to score points. Both modes can be played in teams, and can be played with bots or other InstantAction users.

You don’t need to be intelligent to play Think Tanks; you just need to have fast fingers and good aim. Don’t let the fact that you’re a brain driving a vehicle fool you. The maps feature landing points that will do things like make you hop or speed you forward, and a few power ups (like rapid fire) are strewn about, but that’s really about as deep as it gets. The game does look surprisingly nice, with maps that vary from jungle-esque environments to barren, purple space planets. Why are there tanks being driven by brains? Perhaps that’s a question we’ll never know the answer to. 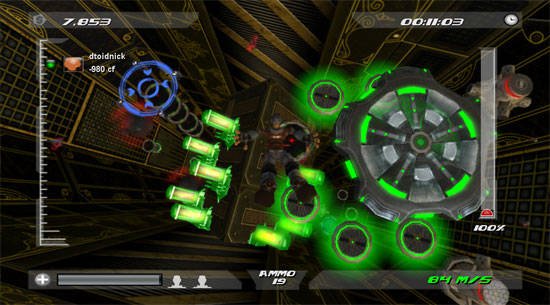 In ScrewJumper, you fall to the bottom of a mineshaft, nailing green obstacles along the way. Green good, red bad. It’s that simple. Toss in the ability to speed up, break, and toss dynamite, and you have yourself some high-intensity shaft jumping action. Or something.

You know, I didn’t really like ScrewJumper on XBLA, and I’m not a huge fan of it here, either. The fact that I didn’t pay for it helps me enjoy it a bit more, and once again, I’m surprised at how good the game looks inside my browser. In the beta, there are a number of shafts available (note: not as dirty as it sounds), most of which vary in look and feel. Also, I have no idea why the game is called ScrewJumper (something to do with destroying a “scrutonium reactor,” I believe), but I think they’ve done themselves quite a disservice by putting “screw” in the title and then having the game revolve around “shafts.” Somebody call Jack Thompson. 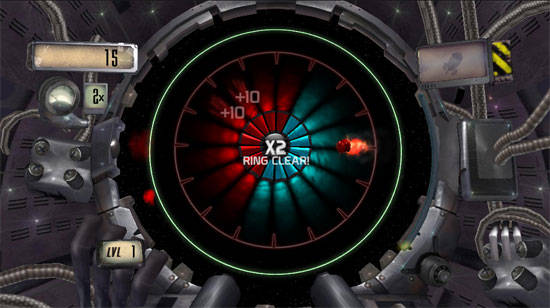 I’m not sure if I should be disappointed that Cyclomite is one of my favorite games on InstantAction. The service tries to differentiate itself from other browser-based services by attempting to offer deeper gaming experiences, more akin to what you might find on a console. In many cases they have, but the fact that I kept coming back to Cyclomite kind of worries me.

Cyclomite is a puzzle game where you spin a multi-colored ring to catch meteors on matching color segments. You stack up too many on the wrong color, it’s game over. The game includes power ups like a bomb that will clear the entire ring, for instance. But at its core, the game is your basic “match the colors” puzzler. It’s fun and easy to play in a browser; it’s one of those games where you can just kind of zone out and get lost in. In that way, it’s like a lot of other “casual” browser-based titles.

So I guess that leads me to the question — it appears that InstantAction tries to take the browser out of the “gaming ghetto,” but were we content with how it was? Maybe I am. The beta offered up a variety of gaming experiences, but I kept going back to what amounted to a simple, color-matching puzzle game.

InstantAction does offer a rich and growing online community experience — you create your own handle, and you can add friends to a list so you can easily join them in online games. They’re adding new content all of the time, too — Rokkitball, a team-based futuristic third-person sports title, was just recently launched, and Fallen Empire: Legions, a first-person shooter, is currently in a closed beta. The Web site is also currently teasing a “hovertank combat” title, and a slick looking “arcade racer.”

Does InstantAction deliver on the notion of your web browser as a legitimate gaming platform? Well, Garage Games appears to be headed in the right direction, and it’s a hell of a lot easier than dragging your console to work. InstantAction is in open beta now, and since it’s free to sign up, there’s no reason not to give it a shot.

[Update: In response to my whining, the Garage Games folks have let me know that an Xbox 360 controller can be used with Marble Blast Online, ZAP!, and ScrewJumper. I guess that’s one complaint you can check off my list!]