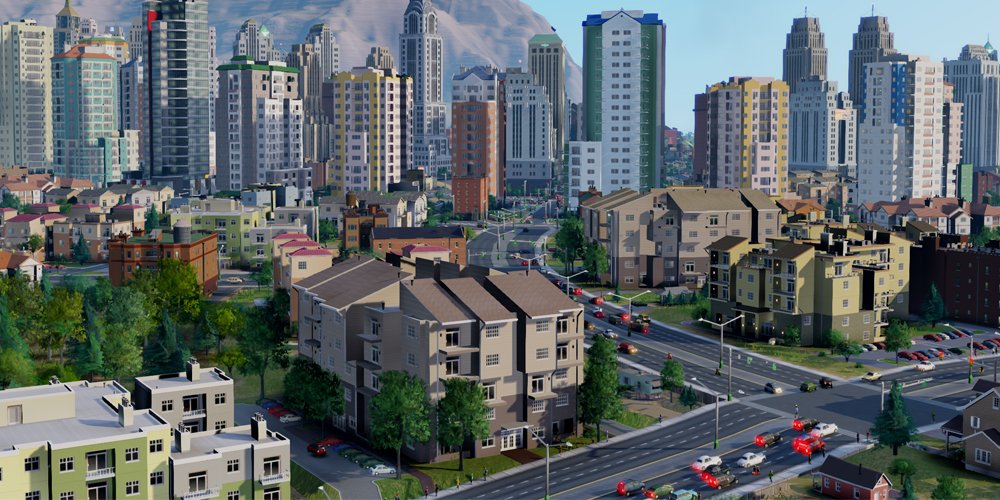 It’s all about the roads

One of the very first games I ever owned that truly showed me the joy of gaming was SimCity 2000 for the Mac. I lost hours of my life managing the shit out of my various towns, altering the land to best serve my capitalist needs, and repeatedly failing to save Oakland after the firestorms.

I never got around to the other Sim City games after 2000, largely due to becoming primarily a console gamer. Now that I own a beast of a PC rig, there’s no way I can pass up the new SimCity, even with as intrusive DRM measures as there are.

Last week, I got to visit Maxis’s offices just east of San Francisco where I finally went hands-on with the city simulation title. I’ve certainly kept up with all our coverage, but it didn’t really prepare me for what I was about to experience. I went in with the strategy I used to use when creating my utopias in SimCity 2000, but quickly found out that my old plans wouldn’t cut it. While a bit jarring to my sense of nostalgia at first, I quickly found myself getting sucked into the experience.

Multiple cities, all under your control

One of the biggest changes with SimCity is that you’re playing in different-sized regions, each with the possibility of creating multiple cities within. The lowest-tier region can hold three cities, while the biggest region can hold 16 cities. And to put doubt quickly to rest, you can play these maps all by yourself, or keep your regions public so anyone can jump in and work alongside you.

That was the first thing that played against my sense of total world domination needs. Before, I could fill up every square inch of a map with whatever I wanted. Now, you’re literally limited within a specifically sized zone for your city. None of the cities appear to be able to ever connect immediately against each other, so there will always be untouched open spaces where nature can thrive. Damn you, nature.

I played for roughly six hours while at Maxis, and the more sucked into SimCity I became, the more I realized that I was okay with the idea of the multi-city concept. I didn’t dabble too much with managing two cities within one region, but the possibilities intrigued me. My first city got pretty efficient by the end of my play time. With the more than plentiful resources I accumulated in my first city, I could focus on other endeavors in my second city as I fed it my excess resources. Jumping from city to city is an asynchronous deal, so time will stop in the cities you’re not actively in until you switch back.

You’ll find that you want to manage multiple cities, as the more cash you can ultimately generate, the sooner you can build a great works site. Within the region is a specific spot near the middle where you can place an airport, space station, or even freaking arcologies (no it won’t launch into space). Placing a great work isn’t as simple as saving up and then having whatever you want built. With the arcologies in particular, after spending a million dollars on it, you’re only developing the base feature. You’ll need to research and put more funding into it to build it up. The rewards are worth it though, as these great sites will bring in more people and profits for all the cities in the region.

Roads are your city’s blood vessels

The next major change that seriously messed up all my initial plans is the road system. One of the first things you need to do after building a power plant is place down a road system connecting to the highway running alongside your city limits. Without that connection, no one will be able to come live or generate revenue in your city. The roads also serve as your power lines, water pipes, and waste management system now, providing three additional vital services for your citizens basic needs at no extra charge.

Roads are so important, that I have to spend a couple of more paragraphs on them. I’m not even going to touch on the fact that roads can be curvy now, either! There are several types of roads that you can place, and it actually really matters what you use. You can do anything from a dirt road, to a multi-lane heavy density road system. Once you’ve placed your roads, you can then set up either residential, commercial, or industrial zones. Zones can’t be placed unless they’re directly connected to a road. And if you destroy a road, the zones/buildings will get destroyed automatically alongside it. The good news there though is that it actually doesn’t cost anything to place down any of the zones now.

So the roads and zones have to go hand-in-hand, and the type of road you place affects the type of zone you will get. Want a huge skyscrapper? Cool, but it’s not going to happen so long as your zone is alongside a dirt road. The higher density road you place, the more higher-tier buildings you’ll get. Plus, to get bigger buildings, you have to leave some open space between the zone and adjacent roads.

This is where I was screwing up the most, and didn’t really realize what my issue was until I paid closer attention to the helpful tips I was getting from my city’s workers. You’ll see plenty of messages from your citizens that will fill in what your current needs are, and you can do what they ask to keep your city happy. Or you can just ignore them, bleed the city dry of its natural resources, and then fund another city in the region to create a better town. Whatever you want!

Each city offers sources of natural resources, such as coal and ore. You have to specialize in something, so you can choose to pillage nature for profits, or focus on generating revenue through casinos or electronics manufacturing. One way to do it would be to suck up all the coal, and then once that’s all gone, you can just destroy the coal plants and replace them with casinos. It’s your city — exploit it as much as you wish.

I went with focusing on being a coal city, and immediately placed down my plant in the first spot I saw with coal. Later I would regret this decision once I bothered exploring my city limits more in-depth through the data layer and stats that the game presents to you. After an hour, I found a much better location for a coal plant I could have run with. You’re free to do whatever you want within your means, I’m just such a heavy planner type and was annoyed at my bad choices when I saw I could have created a better overall design.

Not that it really mattered, though — by this point, I still hadn’t figured out the importance of the road density. That’s the joy of these type of games, however. You do, you learn, and then you do again but better. So yeah, my first city totally looked like Godzilla barf, but by the end of it, I made notes of my mistakes and will be doing things differently next time around.

Speaking of Godzilla and the end, right before I had to finish playing SimCity, I had unlocked my first disaster attack, which was a giant lizard. The giant lizard may make you think of Spore, and that’s because it was totally made in the creature creator of Maxis’s last big game. The monster was modeled in Spore, and then the SimCity team created a version of the creature within their game world.

While I can deal with the major changes I detailed above, one thing I’m not happy about is the limits of the city. I’m not even talking about the city size restrictions, which I feel should be bigger than what you’re given overall.

No, what I’m sad about is that you can’t actually alter the land with the trusty bulldozer tool anymore. Before, I could lower or raise any land mass I wanted, create lakes, plant trees, or completely reticulate splines! Now everyone is forced to play on the pre-determined worlds.

Speaking with lead producer Kip Katsarelis, he told me that “the goal with the regions was to create these crafted experiences. We wanted to give players a new challenge to overcome in each one of these maps that we create.”

A good example of what Kip is talking about is creating a road system along a mountain. You can’t just place roads up a mountain side, as there are some parts that would be too steep. You have to explore a little and find the best way, if any, to place the road against the mountain.

On the bright side though, Maxis is open to the modding community, and eventually modding tools will be made available after release. We’ll be able to reticulate splines one day, just not at launch.

There were a lot of changes, and while it was weird at first, I’m ready to get lost in a SimCity again. There’s so much going on here, and I barely scratched the surface of all the things that can happen within the game. I didn’t even touch on the Global Market economy, the multiplayer challenges, how you can customize and upgrade individual buildings, and so on. On the bright side, you won’t have to wait long to find out for yourself all the new stuff you can do. There’s a lot of changes, but at its core, SimCity still has that classic feel that made it so addictive back in the day.

Of course, none of this matters if Electronic Arts were to shut down SimCity’s servers. SimCity can’t be played without being connected constantly online (yes, even if you just play by yourself). While EA is well known for shutting down inactive online servers, Kip did tell me Maxis would look at options if the time were to ever come to let players continue playing. Not exactly a guarantee, but it’s better than believing that one day you’re going to have a broken game.

It’s easy to see why so many people were turned off by SimCity when the always-on requirement was revealed, but despite that, I will still be getting Maxis’s latest. The new SimCity is such an engaging, charming, and addictive experience that for the time being, I’m not too worried about what could possibly happen in the future.