On October 5, Ninja Theory’s Enslaved: Odyssey to the West hits Xbox 360 and PlayStation 3. Based loosely on the Chinese tale Journey to the West, it paints a picture of Earth where machines have subjugated humans, leaving a rotting civilization behind. But that’s not how Ninja Theory had originally envisioned things.

“Actually, when we originally came up with the concept, it wasn’t even on Earth,” Ninja Theory co-founder and chief creative lead Tameem Antoniades tells me. “It was just an alternate world, [another] planet, like a [Hayao] Miyazaki fantasy world.”

But thanks to a History Channel documentary series, Life After People (pictured above), all of that changed. In the series, scientists and various other folks speculate what Earth might look like if humanity no longer existed, leaving everything behind. 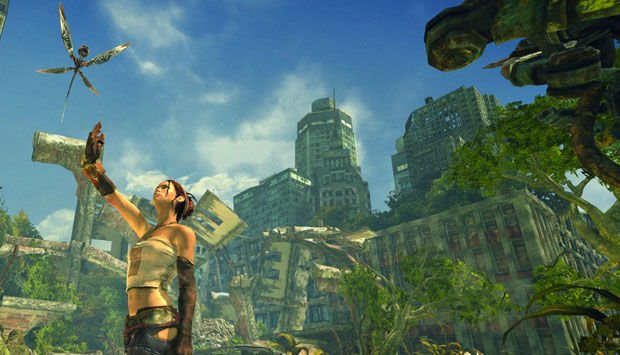 “That had quite a big impact on us,” Antoniades explains, “because it was just really cool the way stuff that we recognize — like cities and things — just totally transform. When we did decided to kind of place [the game on Earth], we took that as an inspiration.”

It’s obvious, too. Coincidentally, while playing through the game, I had also started watching Life After People with my family. Almost immediately my wife pointed out that its barren, once heavily-populated vistas looked like those she’d been seeing me traverse in Enslaved. Structures slowly crumble over time, remnants of a once flourishing society are left to rot, overgrown plant life spreading throughout city streets.

Antoniades also points to a 2004 Japanese film as another influence on the game’s look and vibe.

“There’s a Japanese movie called Casshern, which is kind of a futuristic guy against robots,” he says. “It’s kind of a weird Soviet futurism, and we kind of liked the action in that, with the guy fighting the robots.”

You can download a demo for Enslaved now on PlayStation 3; a demo will be coming “soon” for Xbox 360. Season one and two of Life After People can be streamed via Netflix “Watch It Now,” in case you’re wondering what will happen to your neighborhood after the inevitable robot takeover.

We’ll have more from my conversation with Antoniades soon; stay tuned.