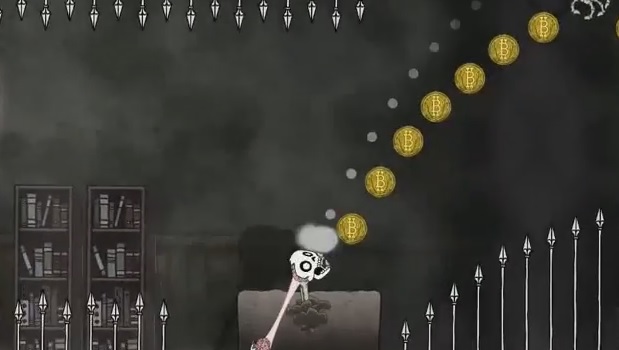 Turns out tax collectin? is more fun than tax payin?

Flick, flick, flick. That’s all you’ll be doing in Skullduggery. Flicking to collect treasure. Flicking to outrun bosses. Flicking to line up stealthy headshots on unsuspecting enemies. You can play the game however you want (usually) — fast or slow; just know that you’ll be flicking the whole time. And, if the build we saw at PAX Prime is any indication, it’s a flicking good time.

Skullduggery’s a title developed for tablets that borrows liberally from the simple mechanic that Rovio (maybe) popularized. By pulling back and letting go, players launch a skull across the screen. Do this ad nauseum, and you have Skullduggery. However, instead of an interspecies vendetta against pigs, this game’s protagonist has a goal that’s much easier to empathize with: riches.

Two things are certain in this world — death and taxes. Skullduggery staunchly enforces the idea that even in the former, the latter’s still an inevitability. Dammit, maybe Wes Snipes was onto something, even if he’s spending some time in the clink as a result. Skullduggery’s titular skull (maybe he has a name; let’s call him Johnny Rotten because that sounds punk rock as H-E-double hockey sticks) is out to collect taxes in the afterlife, and even the post-alive like to keep what’s rightfully theirs. Rock, flag, eagle, and all.

That’s where the flicking comes into play. Well, actually, that’s the whole game (pay attention!) Three-quarters action with maybe one-quarter puzzler dashed in, Skullduggery requires the player to constantly send Rotten flying through levels in search of more and more to claim in the name of the undead IRS. Each level features three artifacts that typically aren’t completely obvious as to where they are, and judging by my time with the demo, will get continually more difficult — both with regard to skill required to obtain, and cleverness with which they’re hidden.

The artifacts, just like the three objectives presented in each level, aren’t necessary for advancement, however. They’re just there for a sense of fulfillment. (Have you been the best little tax collector you can be? By the way, Rotten — working for the man isn’t very punk rock.) Just getting through the levels might prove challenging at times; definitely in the instance of the boss that I encountered.

Facing a skull about 30 times the size of my suddenly harmless-looking Rotten (so many skulls, it’s like an Affliction shirt up in here!) I was given no choice but to run away. Run away quickly, that is. This is where one of Skullyduggery’s more nuanced and handy mechanics come into play. While in the air, you can tap and hold the screen to slow down time considerably, giving temporary faux-pause to more selectively line up your next move.

For a game that’s seemingly centered on the premise of speed and greed, this facet significantly changes the approach you’ll take to Skullduggery, as you now find yourself seamlessly shifting between quick and slow play. Given more time to analyze any given situation, the wise decision’s just a well-placed flick ahead, but gah, there’s more gold in that offshoot, and I can definitely snag it quick before this giant skull smashes me, right?

Maybe you can. Maybe you can’t. But you’ll probably try. That’s because Skullduggery makes everything look so easy, so attainable — even when crushing defeat is imminent. Who knows what damned you to an eternity of tax collecting, but your greed just damned you to the welcome mat of the after-afterlife. Change your fortunes by playing it slow and carefully considering your flicks next time. Things might work out better that way. But, whatever happens, never stop flicking.