Hands on the PAX demo

I’ve actually never played a Dragon Quest game before. I know of the series and some of its creatures, but my largest piece of knowledge is about how an elderly Japanese actress wanted to play IX before she died. To say I walked into my demo session with Dragon Quest Heroes 2 totally blind would be an understatement.

I am a fan of Dynasty Warriors, though, so I sort of knew what to expect. Having just gone back to Hyrule Warriors before the launch of Breath of the Wild, I figured that DQH2 would feature a mash-up of series characters let loose into massive battles with hundreds of characters populating the screen. It looks like developer Omega Force is going for a different angle, though, as this game was not that. 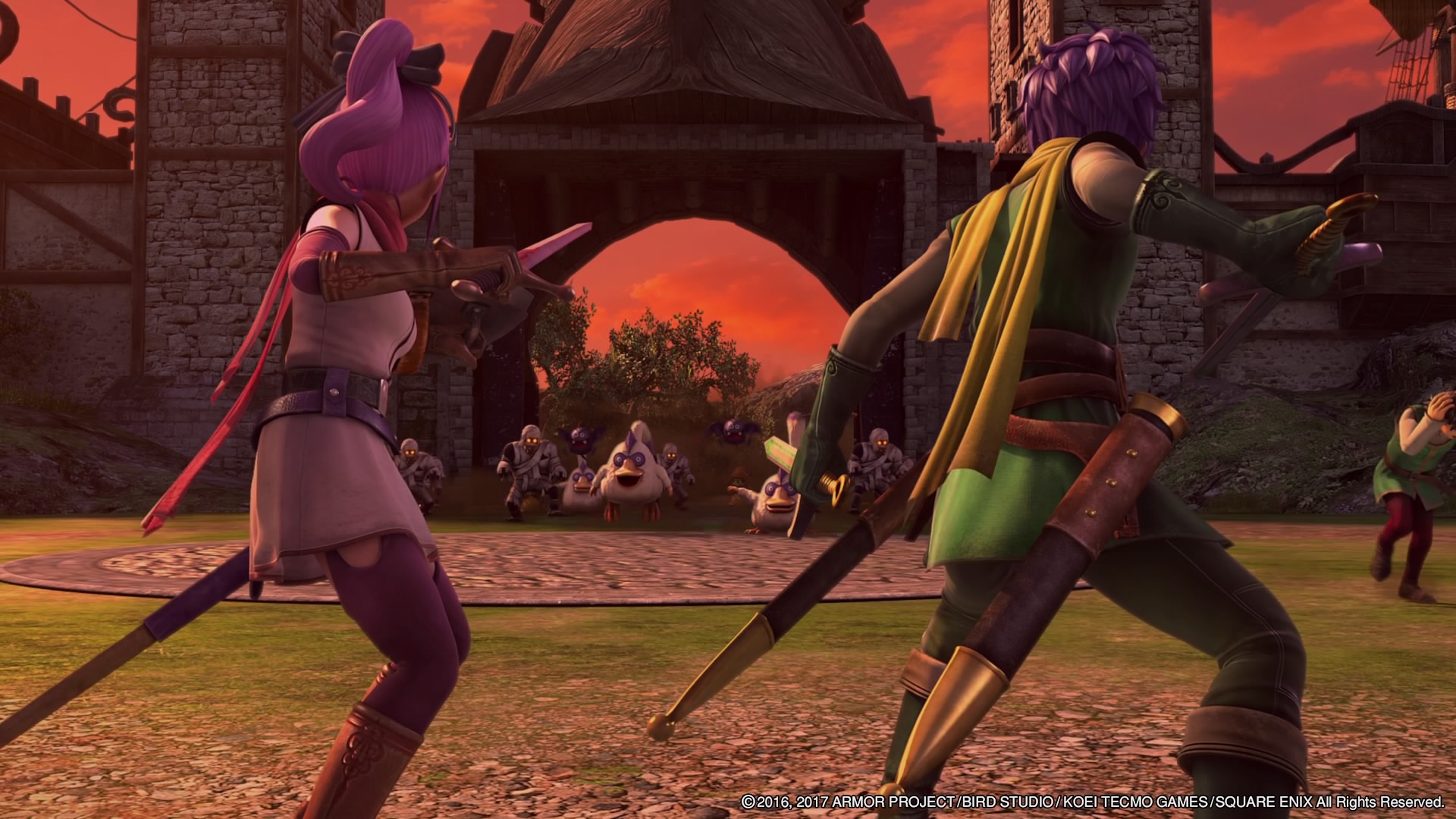 Square Enix had sectioned off a room at the Westin Hotel adjacent to the Boston Convention Center for press. I guess we’re too good to be playing on the show floor, or they just wanted to pamper us with free food and drinks. I kind of associate Square Enix with excess and that room definitely fit the bill.

There were 40″ 4K televisions lined against the walls for each console, though everything was being run on PS4s. I was curious to see the Switch version of DQH2 in action (since I’ve heard it runs pretty poorly), but that wasn’t on the cards. At least the PS4 version has no framerate issues, remaining at a rock solid 60 FPS during every scene (except cutscenes, oddly).

I sat down and started up the game. The code is seemingly final, because there wasn’t a specific demo portion for this event; I was just playing the full game and starting up new save file. If you have any worries about not being able to have multiple saves, put those fears to rest. There is also a Japanese VO option, but that oddly isn’t in the “options” menu. You get to change normal settings after selecting your main character. 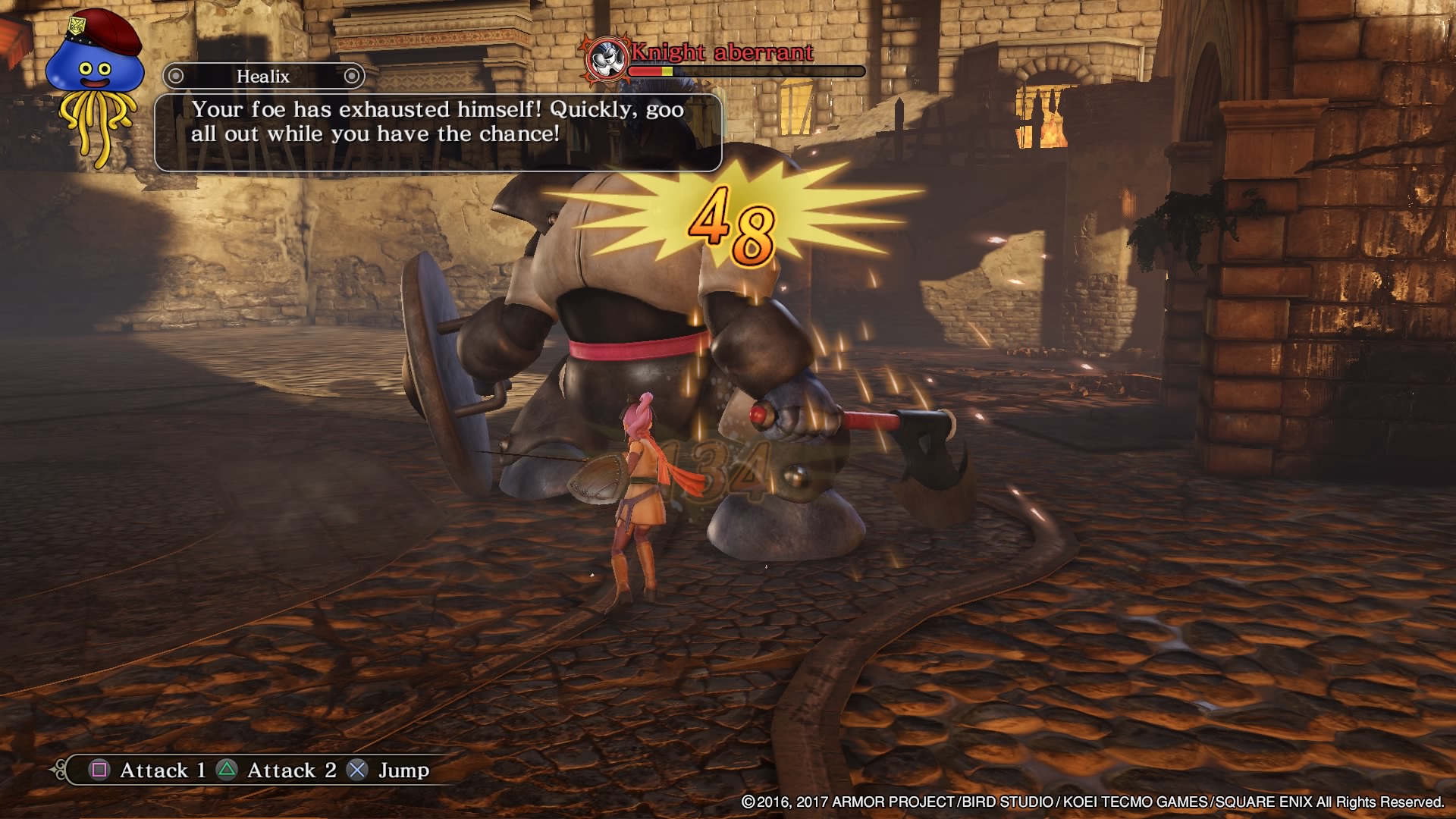 The premise of DQH2 is that two cousins from the kingdom of Dunisia are finally reuniting after many years. The lands have been free from battle for over 1,000 years due to a truce between the different kingdoms. While the two cousins are getting acquainted, monsters suddenly invade and spoil the celebrations.

Well, that is where I would personally start the game, but DQH2 wants to tutorial you to death before you ever begin. Upon picking your character (one of the two cousins, Lazarel or Teresa), you’re given a quick intro for the battle portions of the game in the form of a dream sequence. I went with Teresa due to her having a sword and shield, but I believe the first boss is the same regardless.

You open into a small arena where a heavily armored giant foe appears. Since you can’t just be let loose in this game, your slime companion pauses the action to inform you of how to attack, why you should dodge enemy attacks, and how cool it is to be battling (even though you’re waiting for him to shut up). I suppose I’m willing to let that slide, since not everyone has played Dynasty Warriors. 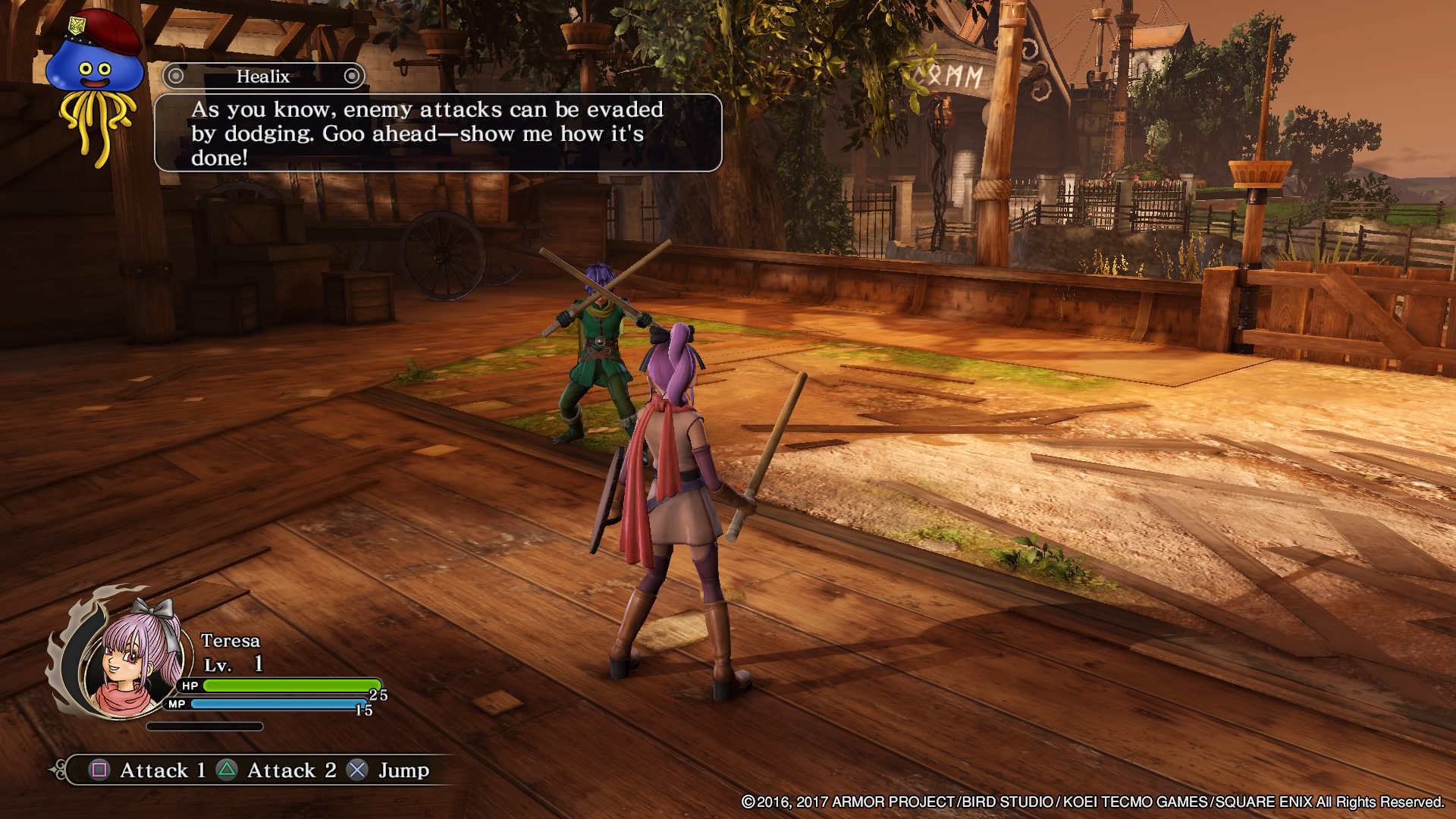 What I’m not too keen on is how after this quick introduction, you’re taken to yet another tutorial. This time, you are facing off against your cousin while waiting for food to cook. They had a sort of rivalry in their youth, but this is an incredibly tedious way to begin a game. Worse still, you can’t simply skip the whole sequence; you can move around, but you have to let your slime companion talk and inform you of things you probably already figured out from the first battle.

Then the game moves along to that invasion I mentioned above. Now the reigns are handed over and you can finally just kick some ass. You take out enemies like a god, but obviously the story doesn’t bother to acknowledge that as we need to introduce another new character, Desdemona. The cousins are on the brink of getting gutted when Desdemona jumps in to save the day.

Along with picking one of two starting characters, you can recruit other characters into your party. I suppose Omega Force was looking to replicate the experience of actually playing Dragon Quest while shifting the genre up, since now your cousin and this new warrior are tagging along. You take out another boss and are given a cutscene that details more of the plot. 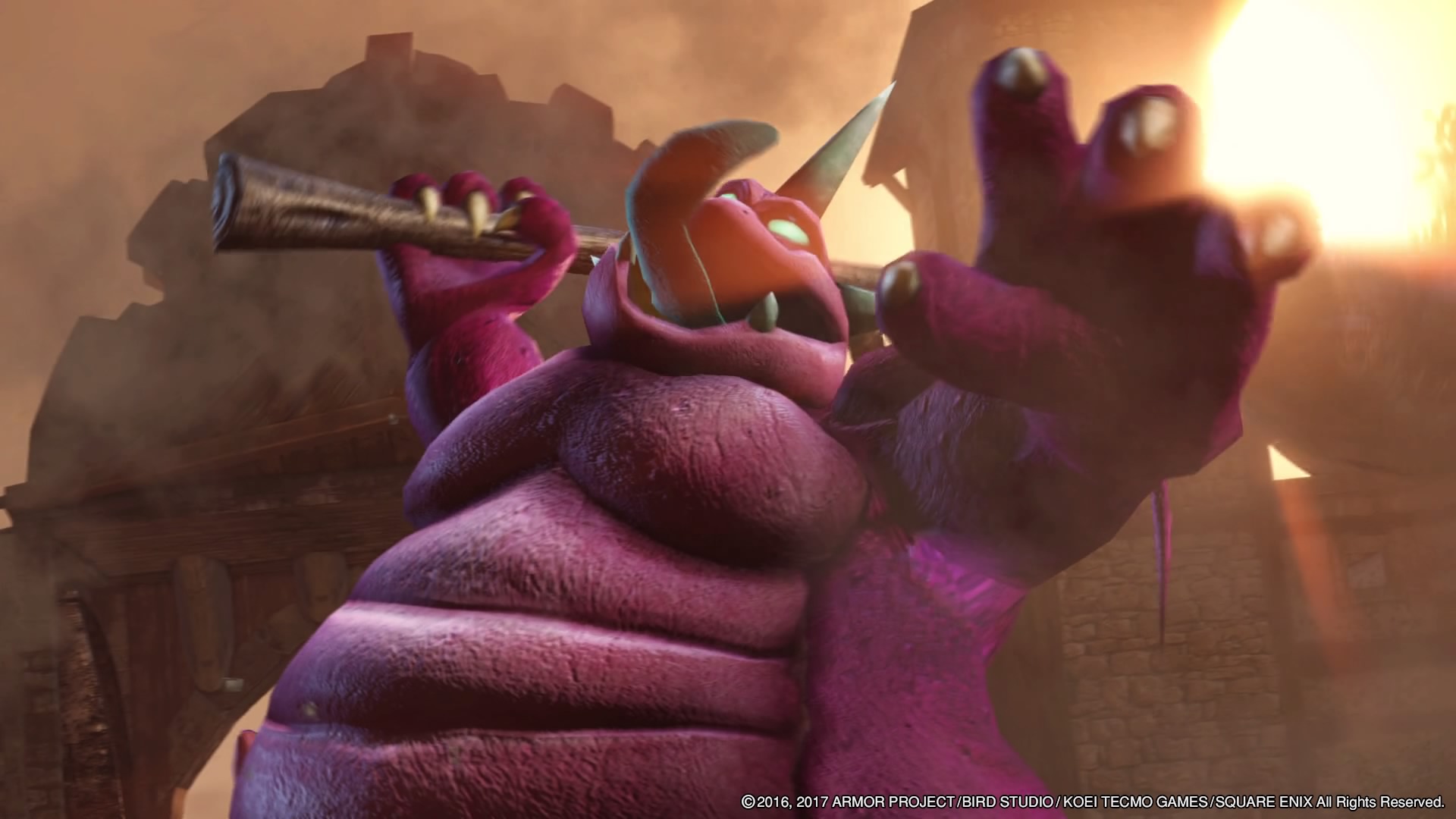 Since you were in the kingdom of Arba and Dunisia was the one invading, obviously the king has questions about your motives. Desdemona explains that she was there with Lazarel and Teresa, so he can vouch for their innocence. Then we get some generic anime interactions where Lazarel is laid back and aloof while Teresa has a stick up her ass and Desdemona laughs in the background saying, “This is gonna be fun.”

You’re then set off into the next portion of the game: the field. This works like a traditional RPG, just a bit more linear. You are going through an instanced area where you can freely attack enemies, run away from them, or search for loot. Certain areas are blocked off for later progression, but you’re free to explore this small section before moving on with the plot.

That is fairly unique for Omega Force, even if it isn’t a unique idea. I do enjoy how much effort went into not making this a Dynasty Warriors reskin as it feels totally different from any of the main entries in that series I’ve ever played. Of course, I may be lost or get scared, so the game has to tutorial me some more about exploring the field. 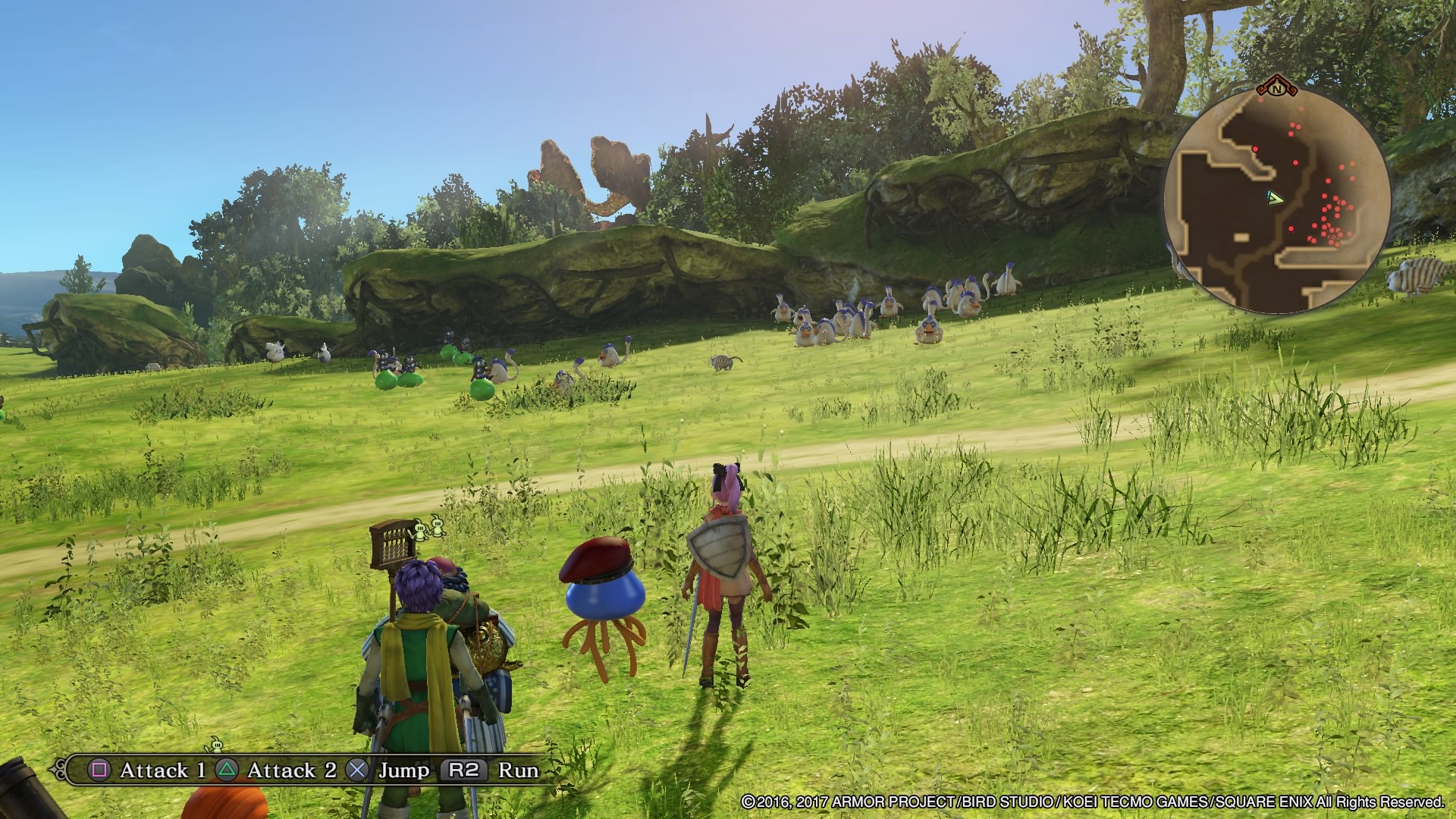 That seems to be my biggest gripe with the game from what I’ve played. I’ve never been a big fan of forced tutorials, preferring that developers teach through level design or more organic conversations between characters, but Dragon Quest Heroes 2 starts off incredibly slow. I would have thought that, this being number two, people who played the first game would already be familiar with these concepts.

Then again, I don’t know if that game had open fields and different towns like an RPG or more closely followed the Dynasty Warriors format. I thought mixing the two series was a good idea (since Dynasty Warriors has always had lite RPG elements), but if doing so meant bombarding players with walls of text to explain the minutiae of the game, I would have just said the hell with it.

I wish I could have seen what comes later, because I’m sure the game is fine in bigger battles. The side quest I completed had hooded foes jumping out of bushes and it was kind of hectic, which is neat, but it came after so much downtime and scrolling through text that I’m not sure I could care enough to continue. 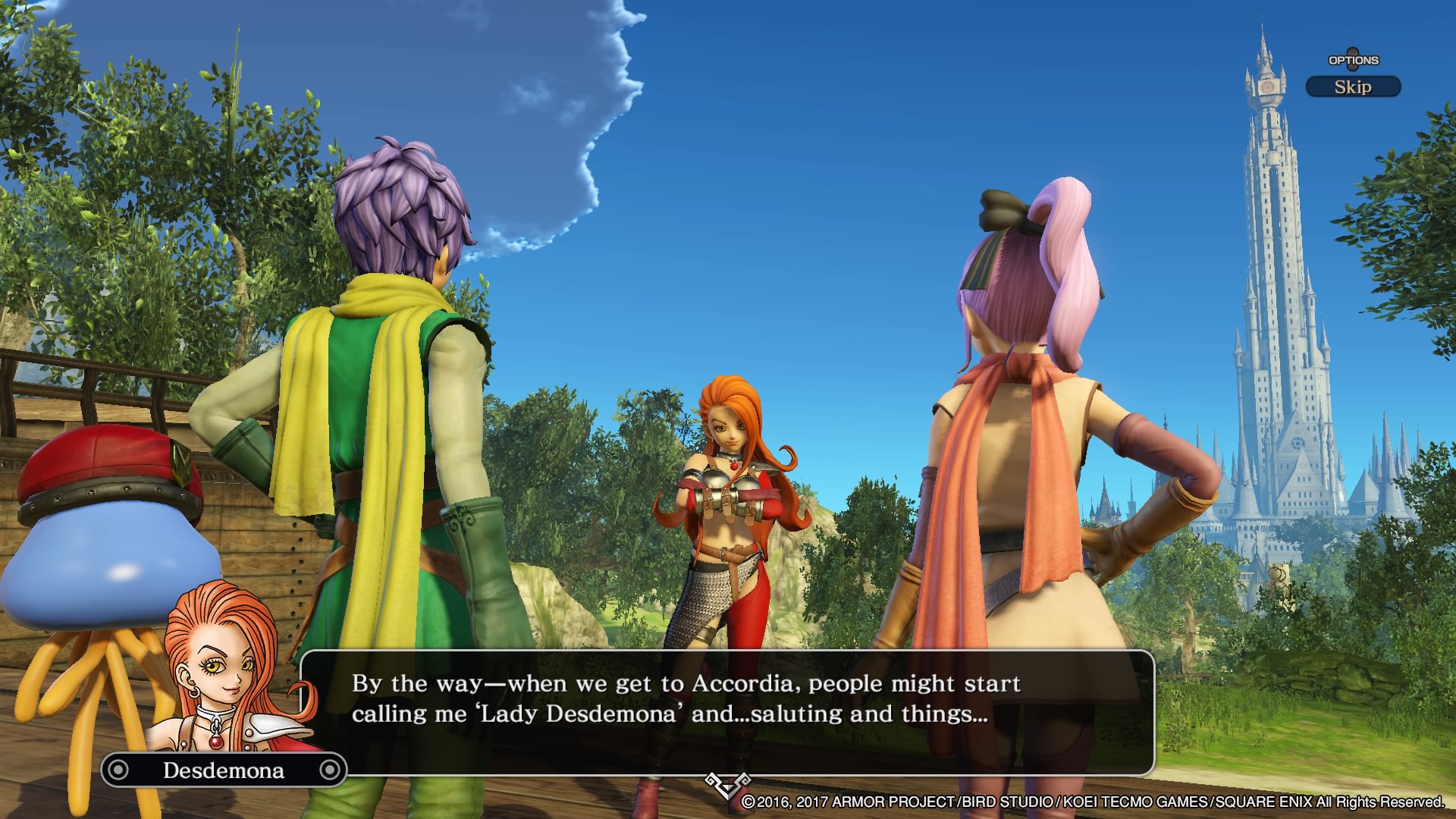 This will probably be a moot point for fans of the Dragon Quest series as the graphical design just drips with Akira Toriyama’s classic style. Being in full 1080p, the character models look stellar. The rest of the world is a bit bland, but since this is a PS3, Vita, and Switch title in Japan, I’m sure Omega Force wasn’t aiming to push the limits of the PS4 for this entry.

I don’t know any of the songs from Dragon Quest, but the music in DQH2 sounded like an SNES game. I have nostalgia for the sounchip of that system, so I was pretty impressed with that. It always brings a smile to my face when I hear some classic music and I’m sure there are nods to the series abound.

It just seems like you’re going to have to sift through a lot of boring text to actually get into the adventure. Seeing as how the game has been out in Japan for nearly a year, none of this is going to be changed. Anyone still interested will just have to make their peace with the slow start, but there is still promise for the final game.