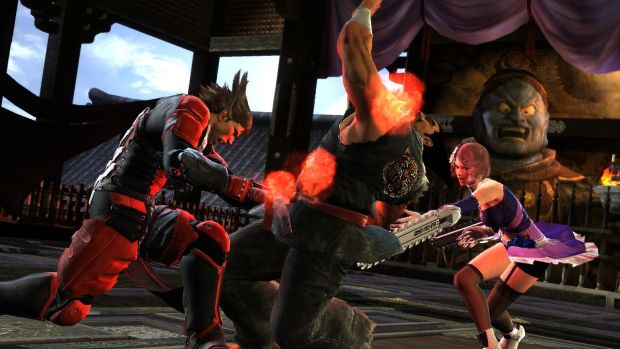 Tekken Tag Tournament 2 was released in Japanese arcades last year and came with 44 characters. That’s a lot, but Producer Katsuhiro Harada wants to introduce even more characters for the console release. Harada wouldn’t state exactly how many during our Q&A session last week at a Namco Bandai event in Las Vegas, but when he showed off the character select screen before a versus match he pointed to the empty space in the character select plate and simple said “that’s where the new characters will be placed.”

That could mean up to 22 new characters if they want to fill the plate. 50 characters were confirmed in the new trailer so that makes for at least six additions. I wouldn’t be surprised if Harada goes all out with 22 as Dead or Alive creator, Tomonobu Itagaki, told Harada “That’s a bit too much, isn’t it?” after sharing his plans. Harada response was that he told Itagaki to “shut up” and that he’s “taken three years already on [your] game so [you] should worry about yourself instead”, obviously referring to Devil’s Third.

Harada was quick to bring up that they have no intentions of charging for the extra characters. While they’re still trying to figure out how to deliver the characters (whether unlockables in the game or available through downloadable options) Harada stressed that the characters will be free, later adding that levels will be free as well.

Lastly on the character front, Andy Burt of the PlayStation.Blog asked about exclusive characters for the consoles and Harada doesn’t seem interested in doing anything of the sort. In fact, Harada turned the tables on us and asked if that’s something we’re interested in. Everyone in the room was largely indifferent as most of us are multi-console owners.

I’m sure the news of free characters in a fighting game will make you want to perform a suplex of happiness on whatever object is nearby in light of recent events.