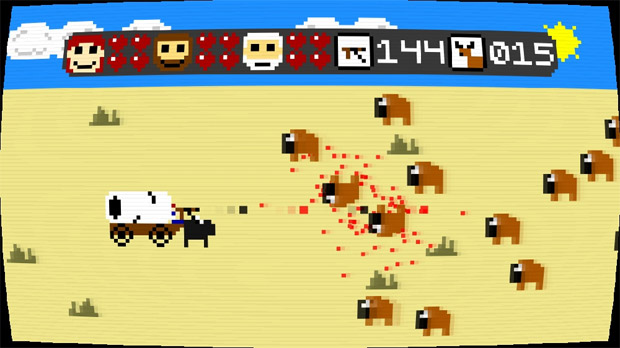 Many of us can agree that Oregon Trail is pretty great, even if it isn’t the most terribly exciting game all these years later. Even still, we have fond memories and independent developers have been able to capture that spirit with original titles that aren’t quite so passive in their gameplay.

Super Amazing Wagon Adventure is one such game, and it lives up to its name. You ought to buy it. I’ll do my best to sell you on why that is, if you’ll kindly give me a few moments of your time. 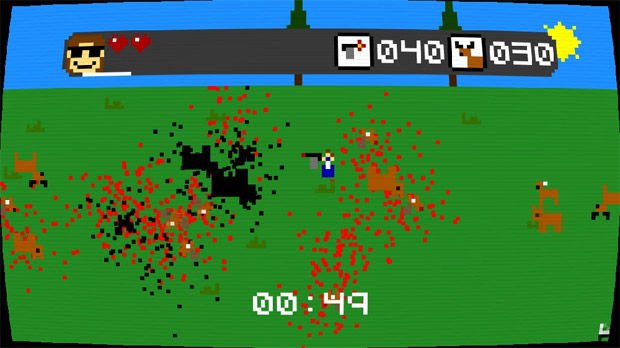 Upon designing three party members — based on friends, family, or co-workers, undoubtedly — you start your journey west. The entire game is made up of a series of semi-randomized sequences that are introduced with text, so each playthrough will vary. In one scene, you could be outrunning lava while mowing down llamas, and in the next, you might be swimming under a river (as opposed to across it) while fending off piranhas and narwhals. It’s outrageous.

How does it play? Like a sidescrolling shoot-’em-up when you’re in the wagon, and like Smash TV for sequences outside. Each character has four hearts that make up your overall health. You can pick up health packs, but once a character is dead, that’s it. Weapons include things like rocket launchers, shotguns, and a falcon, to name a few. That falcon is ridiculously good, by the way.

Completing the game won’t take long, but it’ll probably require a minimum of four or five attempts before you’re skilled enough to get there. More than that, though, Super Amazing Wagon Adventure is built with replayability in mind due to how much potential content there is to see. Going a step further, there’s even unlockable wagons!

In addition to the main story mode, there are two endless survival modes, one which stitches together random scenes and another where you play a single sequence for as long as possible.

Conrad, Dale, and Chad set out and the trip started off mundanely enough. After dealing with some armed bandits — hardly a problem when you’ve got an AK-47 — they sent Dale to go explore. That night, he stumbled across a group of travelers sleeping by a fire. They had some health kits sitting nearby, and they weren’t actively using them, so he quickly stole everything and continued on. No big deal.

Eventually, he came to find that without the precious supplies, those poor souls had all starved to death on the plains. Unfortunately, guilt was the least of Dale’s worries as he made the journey back to the wagon — the campers’ ghosts were now after him, in addition to a bunch of coyotes. Armed with a flamethrower, he was able to survive long enough to escape, but not without getting bitten.

A couple of weeks and many dead animals later, the trio discovered what looked to be ancient ruins. They sent Chad to investigate, because he always had a thing for treasure hunting. Inside the temple were mummies, which — between their surprising agility and raw numbers — were too much to handle with only a pistol. He never returned, so the group pressed onward; just like they had agreed beforehand.

As Dale and Conrad traveled further, they headed up a mountain that annoyingly blocked the way forward. A sudden avalanche had them on edge, as did a pack of hungry wolves. So preoccupied with dodging the mountain’s tumbling boulders, they went straight off a cliff. While plummeting back toward solid ground, a pissed-off murder of crows took its rage out on the remaining two adventurers.

Out of ammunition and ideas, Dale valiantly attempted to fend off the birds using a sword. Sadly, there were simply too many of them. Mere seconds after tearing him and his fabulous hair to shreds, the flock next set its sight on Conrad. It was then that the last surviving member was pecked to death before he ever hit the ground. They did not reach their destination, but they will be remembered.

The best part about the game is how stupidly inexpensive it is: the Xbox Live Indie Games version is only $1 (80 Microsoft Points), while on PC, it’s still only $3 with the soundtrack included. For the latter, you can find it on Desura, or if you act within the next day, inside a very solid Indie Royale Bundle.

Having played both versions of Super Amazing Wagon Adventure, you can’t really go wrong either way. For PC, you can play using either an Xbox 360 gamepad or with WASD + mouse. Both are totally viable.