But it’s so much more than that

Devolver Digital has a penchant for picking up clever game jam submissions and giving them a chance to grow into fully-realized titles. Titan Souls is a fine example, and it would have never had any exposure outside of the tiniest of niche audiences; now, it’s gotten enough funding and press that many eagerly await it.

One of the publisher’s most recent pick-ups certainly has the moxie to follow the same path. Ronin is a smart, cerebral game — one that requires care more than stick skills. A cursory glance invites comparisons to Gunpoint, but that’d be selling it short. Ronin melds real-time and turn-based play, a combination that results in an action puzzler of sorts, but with more emphasis on the latter than the former.

It’s that emergence of two conflicting styles that makes Ronin so satisfying. In the three-stage demo I played, I was tasked with working my way through buildings, hacking terminals, and eventually assassinating a target. Outfitted with a target marker outlining where any particular leap would transplant me, I hopped across levels and climbed up walls. Easy enough, no real threat there.

However, when running across the increasing number of guards patrolling the secured area, that’s when the turn-based action took a front seat. As soon as an enemy sees you, Ronin immediately switches formats. As a laser sight trains on you, you’re given a ton of options and an endless amount of time to determine the best approach to the situation. An early encounter had me jumping to the ceiling of a room to dodge a single shot. On the next turn, the guard’s focus followed me, so it required jumping back down the ground so that he shot high. Repeat until close enough to dispatch him with a melee kill.

In the event that no guards in a room saw me (which happened often because sticking to the shadows is the way to go), real-time could be employed to stealthily sneak up on them one at a time. But, once spotted, it was back to the challenge of figuring out what sequence of jumps and kills would result in simply living past the encounter.

That’s not to say that Ronin funnels the player into two distinctly different combat approaches. At any time, a button press will switch the action to the other method. If you’d rather take a stab at brute-forcing your way through a section, go ahead. Although, chances are you won’t make it very far. 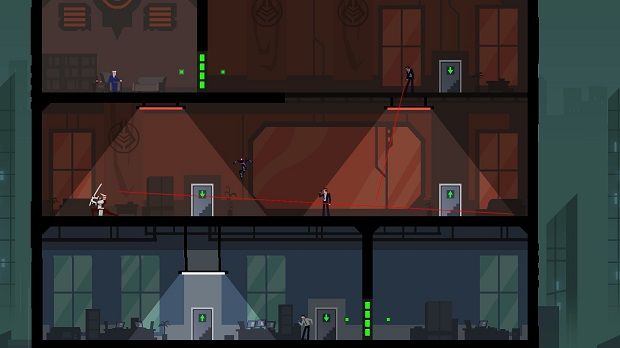 The method may feel new, but the reason for the madness will probably come with a twinge of familiarity. In a lot of ways, Ronin is kind of Kill Bill: the Videogame. It follows a helmet-clad, motorcycle-suited protagonist on a quest for revenge. Bloodshed is the only acceptable method, as she tries to infiltrate complexes and assassinate the leaders who wronged her. Then, at the end of each level, she gets away on a slick, souped-up bike.

Even though it cribs from Tarantino fairly heavily, Ronin is still an absolute joy to play. A Devolver representative who hadn’t played much presented the game to me, and we essentially figured out the last stage together. It was like a chess match against the enemies where we had to think three steps ahead at all time. Many deaths occurred, but we eventually got through all of the hairy situations. I was playing, but it honestly may have been just as enjoyable in his shoes — helping outline the strategy turn by turn but not executing.

The culmination of all of that was an appointment that ran over on time, but felt like it passed by in a breeze. I simply lost myself playing Ronin. I think that might be the case for a lot of people when they get to try it first-hand. It’s so much more clever than it initially looks, and you’ll consume yourself with trying to figure it out.

And to think that its exposure was almost limited to a few who tried it at a game jam.