From Walks to Skips to Stops

[Usually, promotions are nice and long to engage readers with our community content. But this time, I wanted to help share this message of a bittersweet goodbye to Regular Show, one of the most endearing shows a gamer of any age could watch. Adventure Time may have gotten all the marketing and merch, but Regular Show had our love. ~ Strider]

I just finished watching the final four episodes of Regular Show, which were aired in an hour-long block on Monday. While there are things I didn’t like about it — namely the rushed epilogue that condensed a wealth of character developments in a three-minute montage — overall, I thought it was a fitting end to one of Cartoon Network’s greatest original shows. 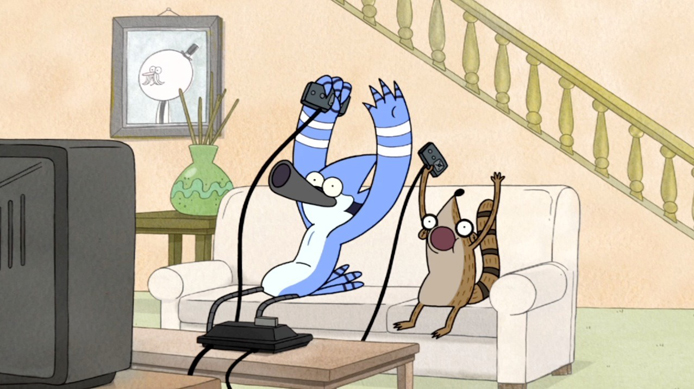 But Regular Show wasn’t just a great cartoon. Thinking back on its six-year run, I am confident in saying that it has cemented itself as one of my favorite television programs of all time. Sure, it dipped in quality after a few seasons, and sure, the animation has always been a bit jank, but it struck an emotional chord with its fans, myself especially.

Though it aired on a channel for children, Regular Show‘s true target was ostensibly adults who held a fondness for ’80s entertainment — the music, the movies, the consumer culture, and the video games. Oh, the video games! I don’t think there has ever been a show that understood the finer shades of gamer culture quite like this one. I mean, one of the recurring villains was the floating disembodied head of infamous Donkey Kong record holder Billy Mitchell! How many people would even pick up on that!?

The show would be nothing if not for its endearing characters, all with signature lines and catchphrases that my friends and I will doubtlessly be quoting for years to come. The main protagonists, the blue jay Mordecai and the raccoon Rigby, were 20-something slackers who lacked direction in their lives, but over the course of eight seasons, they matured to become more well-rounded individuals, though they thankfully never lost their goofball attitudes.

I was in their shoes when Regular Show first hit the airwaves in late 2010 — I was 25 and hopping from one part-time job to the next, unsure of my plans for the future. I thus felt a connection with these guys, and I like to believe that I have grown alongside them. I too felt the disappointment of being unappreciated and undervalued, I too felt the sting of borderline poverty and loneliness, but I was able to push through, explore new talents, and find renewed purpose. That there existed a silly cartoon that mirrored the roller coaster of my life in its own twisted way helped keep me warm.

And lest I forget, the biggest highlight of Regular Show for me was that I was once fortunate enough to conduct a phone interview with series creator JG Quintel! The dude said he would love to see a Regular Show video game in the style of ToeJam & Earl! How awesome is that?

For all the highs, all the lows, and all the “OOOOOOHH”s, I raise a grilled cheese in your name.