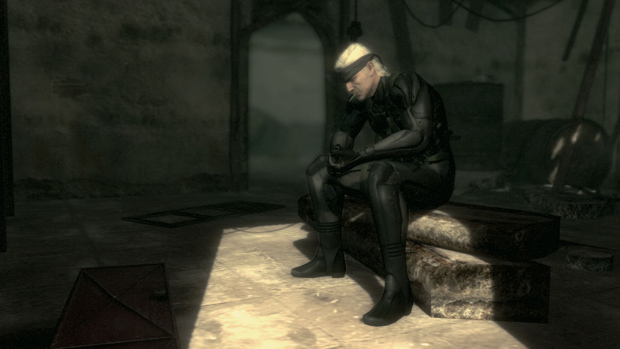 [To cutscene or not to cutscene? That is the question posed by Zwuh; not so much posed as answered vehemently. Want to see your own writing on the front page? Write something awesome and put it in the C Blogs. — Kauza]

Welcome to your beautiful morning. The sun is chirping, the birds are shining and your pockets are filled with party money. You’re going to get a damn ice cream and you’re going to enjoy it. Expertly placing one foot in front of the other, you make your way down the street to the corner shop. The door opens with very little effort and you step towards the counter.

Then it happens. Your eyes are plucked out of their sockets and placed on a nearby shelf. While you stare from your distant perch, the shopkeeper starts selling a delicious treat to your limp body. Two men in blue jumpsuits swoop in and begin puppeting your husk through the motions of modern capitalism. You watch on as the hollow buys an ice cream and makes small talk about football. You don’t even like sport. Transaction complete, your eyes are thrust back inside your head and you black out, waking up outside the store with an ice cream in your hand.

And that’s roughly how cutscenes work.

There are two main schools of thought on the topic. The first is that cutscenes are a horrible abomination which needs to be purged, a lazy storytelling method that’s nothing but video games wishing really, really hard that they were movies. The second position is that cutscenes are a vital method for conveying complex narrative and without them sitting on the couch eating jumbo-size corn chips while stabbing elves would be meaningless.

If excessive use of cutscenes really is abuse, then Metal Gear Solid is the drunk stepfather of video gaming. All the titles have, to various degrees, been accused of being movies with short interactive breaks. We’re talking about a series that made us watch a 10 minute montage of two characters slowly walking down a cliff-side road while a British lady waxed lyrical about the nature of genetics as it related to personal life experience. Then the sequel threw in 20 minutes of the most fucked up and confusing shit you’ve seen since the last time a lunatic artificial intelligence piloted a giant metal whale into the side of New York City while three clones had a cockfight on the roof. And when that madness isn’t happening, half the so-called scenes are actually just spent staring at the screen of your spy phone while people talk… and talk. AND TALK.

To their credit, the crack minds at Konami have tried to add interactivity to these infinite conversations by letting you mess with the camera, hear the character’s thoughts on the discussion and bash a small robot into an old man’s legs. Surely this is merely dodging the problem, however. If I’m so disinterested in the contents of a scene then it should be cut out entirely.

But how else do you disseminate information to the player? I need to know why I’m shooting this guy in the face, so the people around me will stop calling me a sociopath. Text-only mission briefings and on-screen objectives are functional, if totally lifeless. And you’ll quickly run out of excuses for Hero Protagonist to be on the phone unless he’s an international secret agent or Niko Bellic. Half-Life ripped open a new hole in the universe of possibilities by having absolutely everything play out from the player’s first-person perspective. Conversations, important story events, climactic moments in key battles, everything is seen not only through Gordon Freeman’s eyes but unfolds with you – the player – still in control. You’re free to wander around, poke things and stare at the ceiling while Dr. Bunsen Honeydew tells you the flux capacitor is about to overheat the universe.

The downside, of course, is the human attention span. With total control at your fingertips it is always tempting to wander off the beaten path, ignore the conversation and see what is in the next room. Or try to punch NPCs. And like a flash, total immersion once again becomes a video game. And it’s all your fault.

Often you want a controlled experience anyway. I will freely admit that a lot of games have better crafted storylines and more cleverly directed scenes than I could possibly hope to conjure from my sugar-addled mind fries. The Uncharted series is widely regarded as some pretty damn awesome shit, largely because of its story and presentation. Not only do the titles each have (absolutely gorgeous) cutscenes with great voice and body acting, but the games themselves are a completely straight line from menu to credits. Yet the mobs do not grab their pitchforks and cry foul, because the presentation fits the content. While Half-Life is written to allow you, the gamer, to step inside a new world and be the Big Damn Physicist who saves the Mother Fucking Day Yeah, Uncharted is a role-playing game in the literal sense. It’s an excuse to be a half-tuck version of Indiana Jones for a few hours, and as such it makes sense to have a very focused story which emphasizes Nathan Drake in his role as part of the world, instead of a silent bystander.

This blog ends with an example. A scene from Bioshock which most will have seen. Spoilers will be minimal, but may leave a scar.

Bioshock uses a similar presentation style to Half-Life – scenes presented in-game from the player perspective – and this is how you roll for pretty much all of the game. Except for one scene. At a pivotal moment the game takes control away from you and forces your character to commit a terrible act, one which you may well totally disagree with. Immediately after that, it smugly informs you that EVERYTHING you’ve done up until that point was forced on you. And it’s true, you did what you were told. The sudden intrusion of a cutscene on your interactive playground is shocking and hurtful, you even start to question the way you play video games.

What makes gaming such an exciting medium is that we get to pick and choose, with grotesque amounts of freedom, what aspects of other art forms we steal. If I’m writing a book, I can’t (within reason) decide to add a video about pandas to page 47. But if I want to have players shoot their way into a building, switch out to an external cut of the whole damn thing exploding, then bring up a page of poetry from a small girl’s diary which the player must thumb through for clues and sadness, then I can totally do that. As with anything, there are good and bad ways to use this power, but removing the tools wholesale would be a mistake.