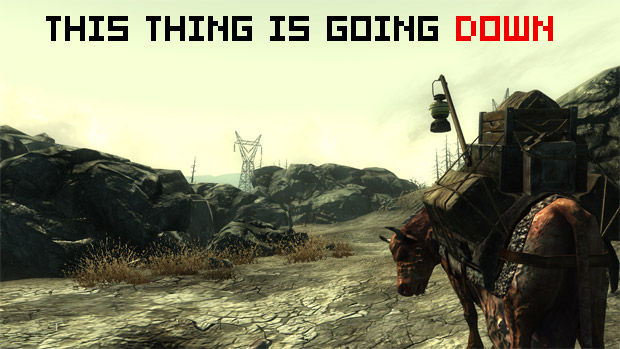 I can’t be the only one who didn’t know you could tip over Brahmin in Fallout 3 by sneaking up and “activating” them. Right? Right!?! Well, to my credit, I was aware that the game’s turn-based VATS combat system was influenced by Crash Mode replays in Burnout.

You too can prove your gaming knowledge cred or lack thereof by checking out Game Informer’s Fallout 3 edition of Tidbits. As far as I can tell, some of the factoids they list have gone previously undisclosed by Bethesda, while others can be found with a quick Google search. It makes for a terrific mix, honest.

The craziest one has got to be this juicy bullet point: “In the original design, you actually drove Liberty Prime and did battle with a working and floating Rivet City.”

Throughout my journeys in the Capital Wasteland, I kept getting this distant feeling that Rivet City (it’s an aircraft carrier, for those who aren’t familiar) was at one point in development going to become active. But driving Liberty Prime? Nope. Could not have predicted that. No sir.