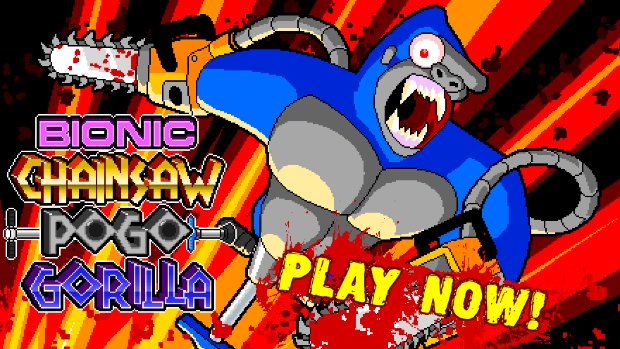 He can have a saguaro cactus for an arm

Bionic Chainsaw Pogo Gorilla. Give yourself a few seconds for that to sink in. He is a gorilla, who has been cybernetically altered to have chainsaws for arms and a pogo stick in place of his legs. If that is not the most awesome thing you have heard today, then you lead a much more exciting life than I do.

Of course, Bionic Chainsaw Pogo Gorilla is coming to us via Adult Swim Games (because who else would be publishing it?), after being developed by Roger Barr, the same man responsible for Abobo’s Big Adventure. As a bionic entity, the titular chainsaw pogo gorilla can actually have its parts swapped out Mr. Potatohead-style, resulting in a character that is no longer a Chainsaw Pogo Gorilla, but perhaps a Rainbow Cactus Beehive Robot. Yes please.