Can anyone spare a lucky dime? Anybody?

Maybe you knew, maybe not, but there’s a DuckTales reboot. The original series ran from 1987 to 1990 and was most definitely a kid’s show (I would know, I was one). The new iteration tries something a little different, but includes some of the original dialogue! (“I made my name being tougher than the toughies and smarter than the smarties.”)

Watch the first episode of DuckTales here. [Edit: seems to be unavailable in UK–if you find it–please let us know in the comments] 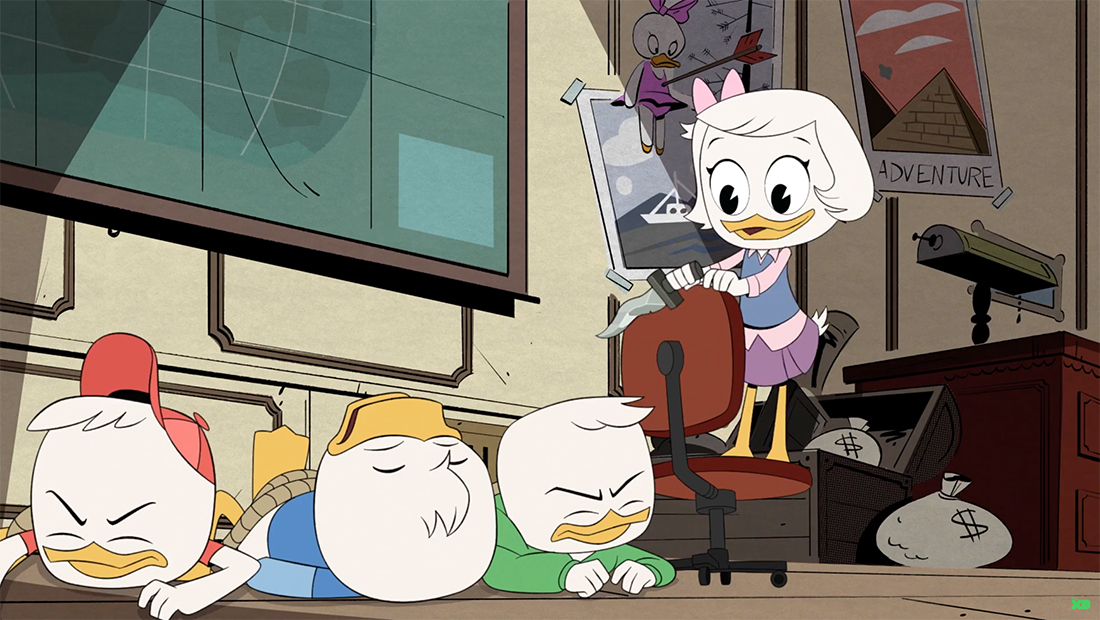 Huey, Dewey, and Louie are clearly older, more like teenagers, despite their similar appearance. And Launchpad is clearly more a surfer-bro-cum-stoner than just the hapless fool he embodied in his earlier iteration.

There’s a great moment when Louie (the green one) is going through Scrooge’s “Wing of mysteries,” aka his garage, putting green post-its on everything. When asked what’s doing, he implies scrooge is “super old” and so he’s calling dibs on stuff. Having just gone through an estate division for my grandmother, and having seen siblings literally do this, this is the sort of humor that you know is going right over the heads of any children in the audience. As is most of it, I would wager. Modernizing by adding female characters is one thing. Modernizing by adding female characters who tie up their male counterparts at knifepoint (and have dolls shot through with arrows in their room) is another. Well played, Disney XD, well played. 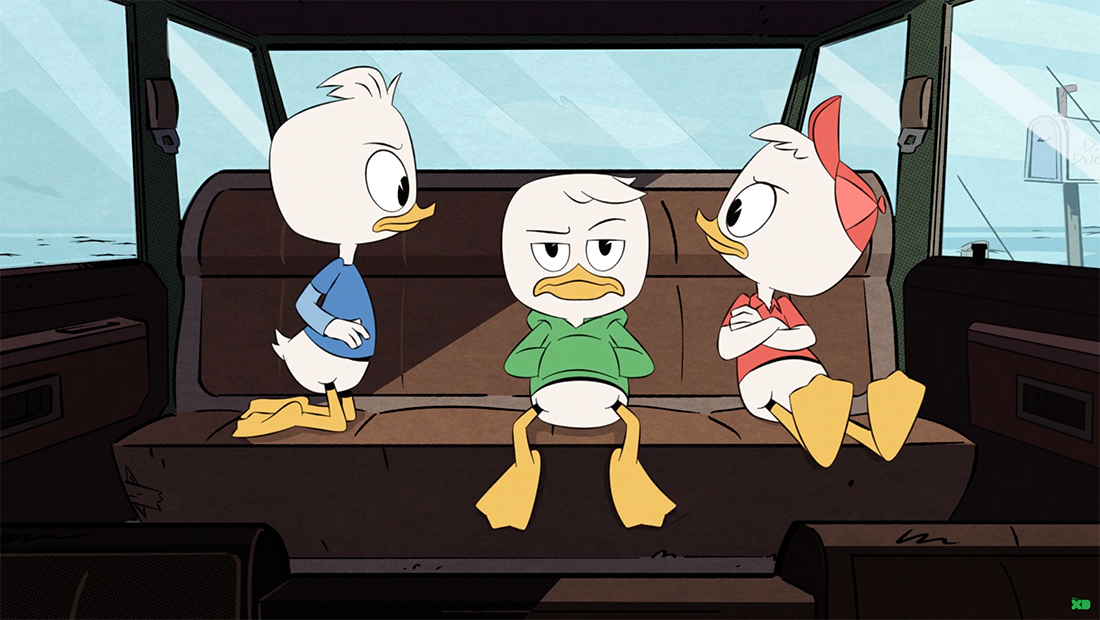 When Disney aimed the nostalgia canon at my generation, I presumed, and I would guess I’m not alone, that they meant to inspire the original audience to share the show with their children—instead they seem to have designed it a la Rick and Morty to be for that original audience, not their children. But as a bonus, if said parents want to buy merchandise (toys, blankets, beach towels, sippy cups, etc.) that is designed for their children, so be it. Win win. 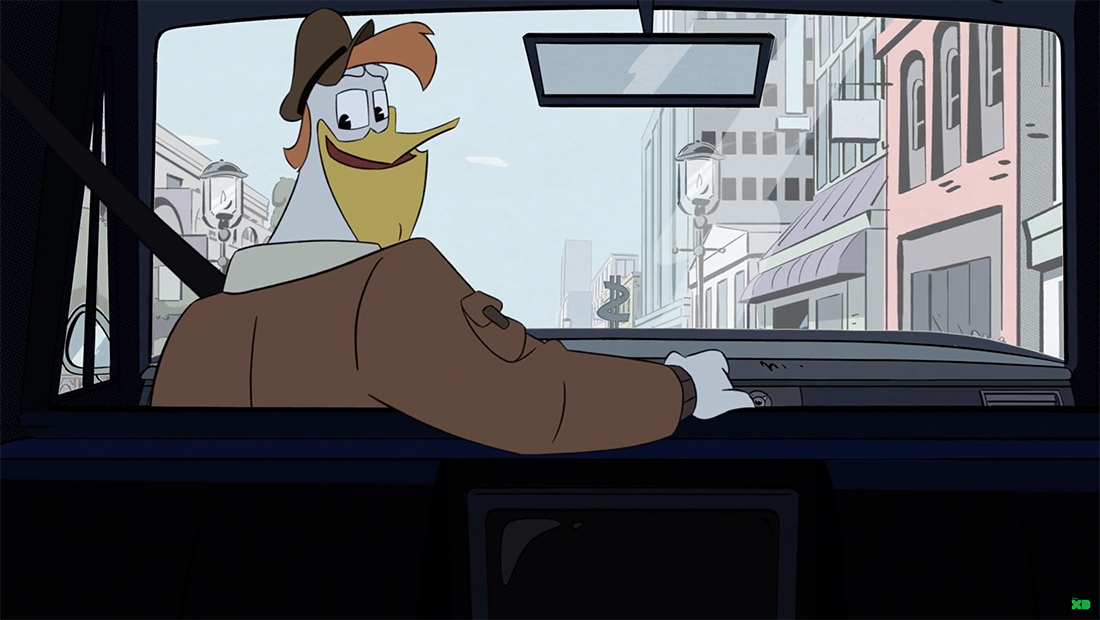 Either way, nostalgia is a powerful ally, and it’s great to see DuckTales back on TV, even if Scrooge’s voice is eerily foreign-sounding to my ears (there’s no repeat of the Transformers movement wherein Peter Cullen reprised his animated VO work for the live-action film series) as Alan Young, the original DuckTales’ Scrooge died last year at the age of 96. In his stead David Tennant fills in (you may know him from Jessica Jones, Broadchurch, or Dr. Who). But by the episodes conclusion it was sounding quite right. 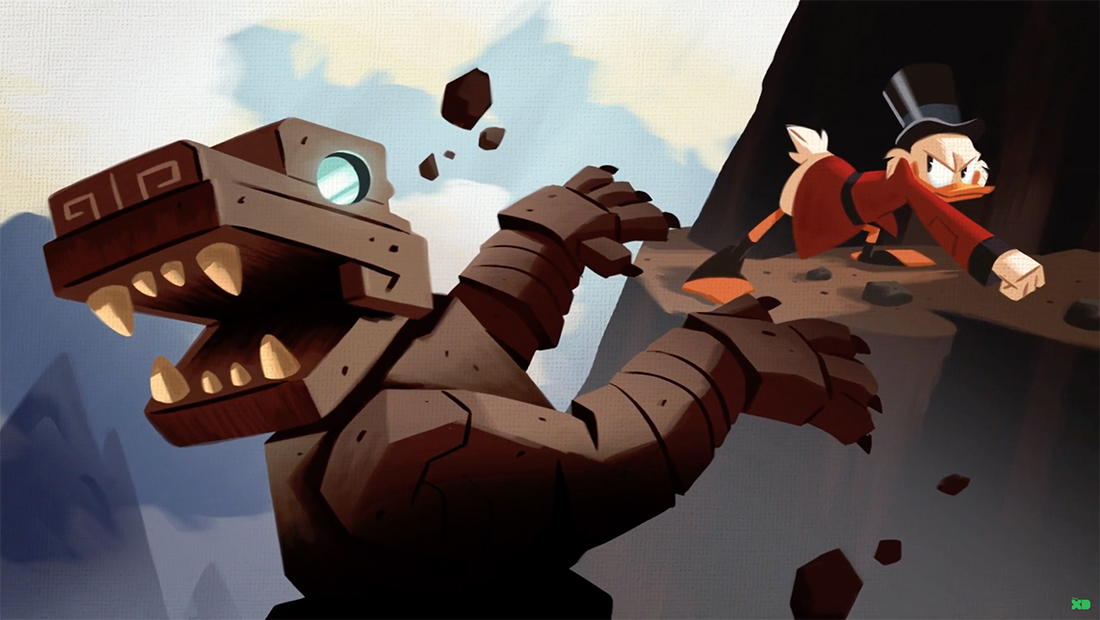 Fun note: Scrooge seems to have a gold cell phone. Yet it’s an early 2000s flip phone. So funny.

Definitely recommend taking a look at this revamp, complete with the original (albeit revamped) theme song.