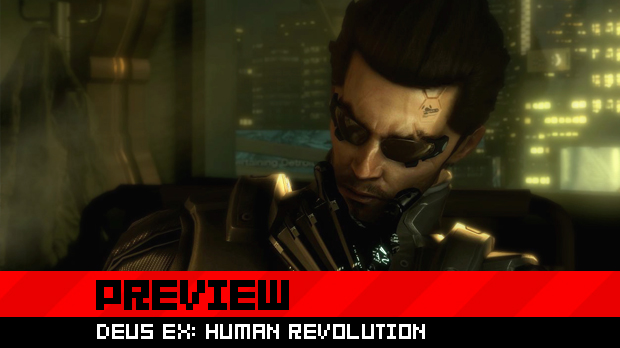 Eidos Montreal has been at work on Deus Ex: Human Revolution for the last four years. A long time coming, the game is finally set to come out this April and it looks Eidos is happy with the state of the game, as members of the gaming press finally got their first real hands-on time with it last week.

Eidos let us loose on the first couple hours of the game, and for now, I can only tell you about my first fifteen minutes or so, where you start off as just a regular human with no special abilities. It’s those first minutes, however, that set up the story — where you find out what causes the protagonist, Adam Jensen, to get equipped with the state-of-the-art tech you’ve seen in trailers thus far. 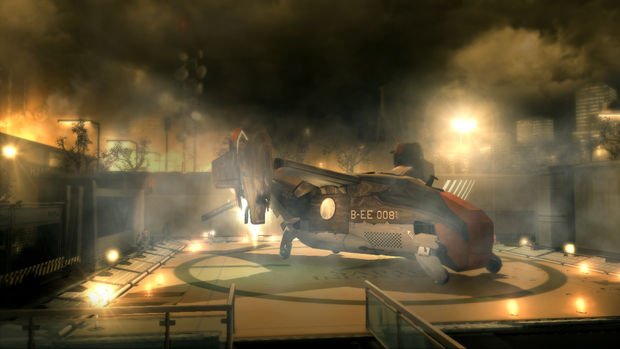 Human Revolution takes place in 2027, 25 years prior to the original Deus Ex. The world hasn’t yet been thrown into total chaos like in that game; humanity is still prospering. As the game’s slogan states, though, “It’s not the end of the world… but you can see it from here.” It’s a golden era: the world has adopted transhumanism, and humanity has taken control of evolution out of the hands of nature or God.

The big money is with bio-corporations specializing in the field of human augmentations, so it’s not uncommon that rival companies will do whatever it takes to put themselves ahead of the competition. Spies are planted into other companies, research is stolen, and scientists are kidnapped. So these bio-corporations hire security firms, and Jensen happens to head up the security force for the nation’s largest bio-corp, Sarif Industries. 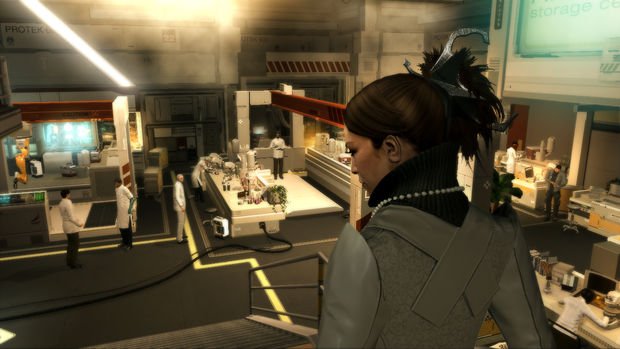 One of the doctors for Sarif, Dr. Megan Reed, has just stumbled upon a breakthrough in human augmentation that has the entire biomedical field buzzing. A rival group of shadowy figures hears of this advance, and takes action to obtain Dr. Reed and her research for their own purposes.

From here, the game takes you to Sarif, where Jensen and Reed are discussing the breakthrough everyone is clamoring about. Jensen is trying to reassure Reed about her work, and you pick up immediately that the two have had some sort of relationship in the past. Reed lets slip that there’s something shady about how she’s achieved her discovery. Before Jensen can find out more, the two are called away by the David Sarif, president of the company, and the game takes you around the laboratory to introduce the player to some of the people you’ll be dealing with through the campaign.

After you’re familiarized with the key figures, an unknown group of soldiers and bio-augmented assassins attacks the building. These soldiers are trying to capture Reed, and Jensen must rush to protect the doctor. 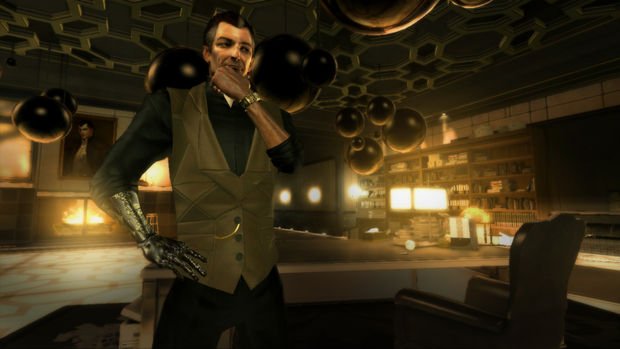 You are now in control, and this first section of the game is more or less a tutorial level where you’re taught some very basic controls as you rush through the different laboratories. You’re still just a regular human at this point, so you’ll be able to pick up on the controls pretty quickly — it’s all pretty straightforward. The major thing that you’re really introduced to is the cover system. Simply holding down the cover button will throw Adam behind cover, and the camera pulls out into a third-person view to give a better angle of the room. You can move in their cover pretty freely until you reach a corner, where you’ll have to double-tap A to maneuver around the corner for a different cover position. You can easily pop up or pop out to the side of cover to fire. You can also fire blindly, which obviously isn’t as effective, but keeps you safe from enemy fire.

I found it a tad cumbersome to maneuver behind cover. It wasn’t a big deal in this section, but it was a little annoying later in the game, where enemies aren’t afraid of just charging in on your position. Third-person shooting was also difficult — I couldn’t tell if my sights were on the target until I started shooting. I noticed that I was correcting my aim after I’d already pulled the trigger in most cases.

I don’t want to comment on the weapon system yet, as it becomes completely different after this section. Imagine your standard first person-shooter if you need a basic idea; the game also has a regenerative health system. 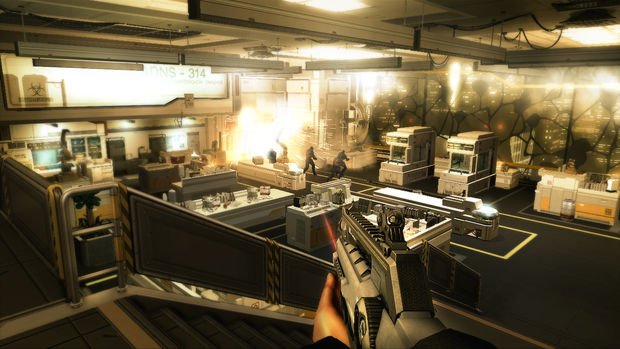 This entire section lasts about ten minutes, and once you’ve reached the area where Dr. Reed is, a cutscene takes place. In it, a super-augmented assassin beats the crap out of Jensen, and throws him through a wall for good measure. Broken and battered, he can only watch as the assassins kidnap Dr. Reed before he passes out.

From here, the intro credits roll and the game picks up six months later, when Adam is sent on his first real mission as a newly augmented soldier. I’ll have more on this first mission and tons to talk about in regards to control — about what it’s like to play as an augmented human — come February 24.