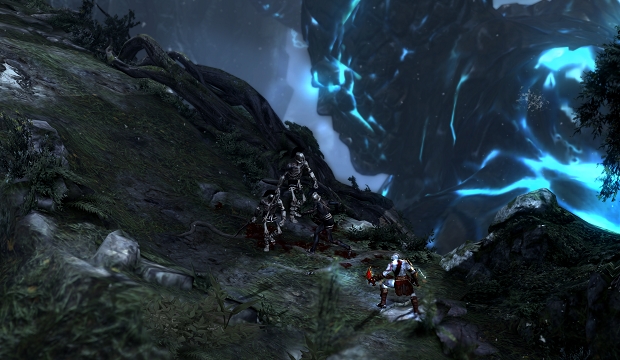 Last week, I was lucky enough to be invited to Sony’s God of War III event here in Hollywood. At the event, under the light of those cool fake torches that blow around paper to look like fire, various members of the development team showed off the first 30 minutes of the upcoming PlayStation 3 title, in addition to answering some questions about the highly (highly!) anticipated game.

After a presentation from Game Director Stig Asmussen projecting some game footage on a huge screen, all the members of the press were led into a huge room full of stations where we could actually play the final build of God of War III. Well, the first 30 minutes of the final build, anyway.

You really are not ready for this game. Seriously.

I am on such a high from the extraordinary experience of playing God of War III, that I am ready to take you through a detailed walkthrough of every visceral, out-of-control second of the awesome opening. Hit the jump for more hyperbole than you can handle.

[Disclaimer: This section of the game includes the sequence already covered by Nick Chester back in January, but it expands into much more. If it starts off familiar, keep reading. Trust me.]

After hitting start on the now-classic, half-of-Kratos’s head title screen, God of War III starts, literally, exactly where God of War II left off. With the goal of attacking Mt. Olympus and the gods themselves, Kratos finds himself on the back of Gaia, as she and her fellow titans are scaling the side of a massive cliff.

In a gorgeous cutscene that is rendered in real-time (you are not ready!), Zeus and a few select gods (boss battles later in the game, perhaps?) stand at the edge of the grand temple and observe the titans climbing Mt. Olympus.

Immediately, Zeus orders some of his guards to jump from the temple onto the back of the titans in hope of stalling their progress.

At this point the playable game begins. 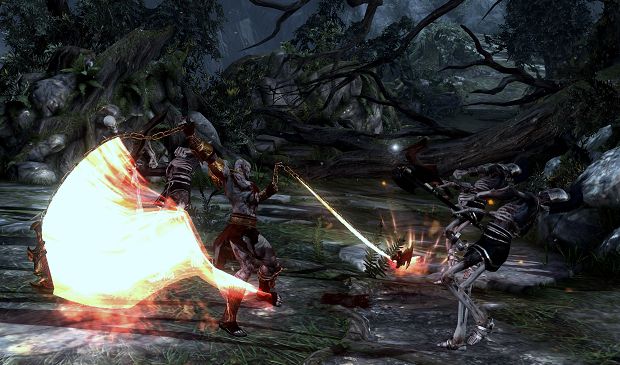 The camera swoops down from the heavens onto the moving, stone- and tree-covered arm of Gaia. On it, Kratos is perched, massive sword in hand, ready to do battle.

For fans of the series, the immediate good news is that God of War III on the PlayStation 3 controls and feels exactly like the God of War games of the past. And that is most definitely a good thing. Without any hesitation, I was performing killer combos on the hordes of guards, blood and experience orbs flying everywhere.

While the initial tutorial battle with a handful of guards commences, the action happening on-screen all around Kratos is out of control. Since you are on the back of a huge, moving titan, the ground under Kratos is constantly moving. In the background, all of Gaia’s body realistically sways just out of focus. Even cooler, the other titans scattered around the cliffs can be seen ascending the mountain. Really, there is so much eye candy to stare at that it is almost too much to handle. 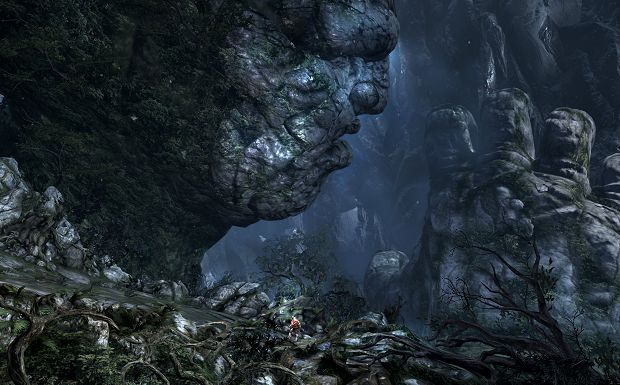 After defeating all the guards, Kratos moves forward by raising a tree that has bent over Gaia’s arm, blocking his path.

At this point a new cutscene begins. Back in Zeus’s temple, the god Poseidon steps forward and dives off the top of the mountain. As he falls, he thrusts his entire body into a climbing titan, knocking it and Poseidon into the water below.

After a huge splash, the water turns into a giant whirlpool.

And then it happens.

From the whirlpool, a huge water snake with the head of a horse and crazy crab legs shoots out. The water snake grabs a hold of Gaia, pulling her down off the mountain. Gaia holds on, refusing to let go.

Immediately after grabbing Gaia, multiple water snakes emerge from the whirlpool, each one taking hold of a different titan.

Then the action switches back to Kratos and the player takes control again.

It’s hard to explain without seeing it in action, but you really have no idea how good the graphics are in this upcoming sequence. As Kratos moves around on Gaia’s arm, Poseidon’s water snakes are swirling around everywhere in the background. The camera spins around, showing all the attacking titans while Kratos battles multiple incoming enemies.

It is ridiculously epic.

As he moves forward, Gaia’s arm suddenly shifts and one of the water snakes jumps in front of Kratos, wrapping itself around Gaia’s arm. 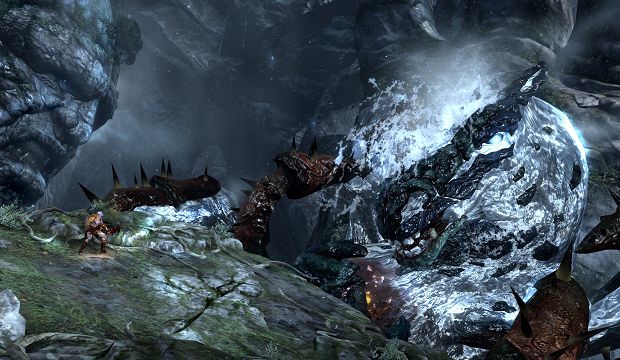 At this point Kratos must attack the huge water snake, dodging attacks from both his horse head and crazy crab arms. Once his energy is depleted, something amazingly cool happens.

The water snake shifts and twists Gaia’s arm. With this, the entire screen spins around, throwing Kratos underneath Gaia’s arm. Hanging on for dear life, Kratos must now battle the coiled water snake while hanging from under Gaia’s constantly moving arm. It is OUT OF CONTROL COOL! 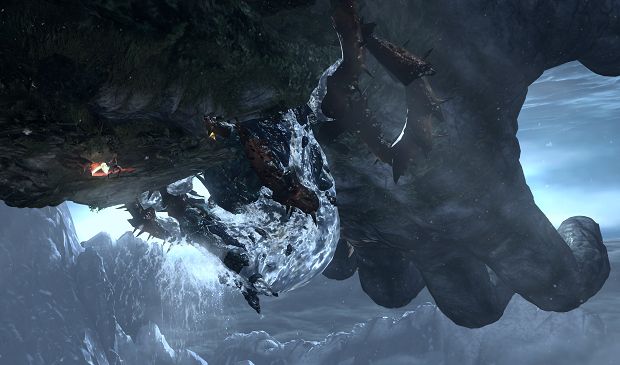 This dance continues in many different positions. As the arm spins around, Kratos finds himself alternating between standing straight, hanging below, and even clutching to the side of Gaia’s arm.

After a long battle, Kratos gets the water snake’s energy low enough to perform his legendary context-sensitive QTE finishing move. Here is a good time to mention an improvement that God of War III implements that helps things dramatically! In the two previous God of War games, QTE symbols would be in the middle of the screen, displaying whatever button needs to be quickly pressed on the PlayStation controller. It worked great, but sometimes the reaction time was so short it was hard to hit the buttons quickly enough.

In God of War III, the on-screen prompts actually appear in a section of the screen related to where the corresponding buttons are placed on the actual PlayStation controller. Meaning: the “circle” symbol will appear on the right side of the screen, the “X” on the bottom, the “square” on the left, and so on and so on. This sounds really minor, but it helps so much and allows you to not miss the incredible visuals by concentrating too hard on one area of the screen. It’s a brilliant (if subtle) improvement.

Once he finishes off the water snake, Kratos is thrown to the side of Mt. Olympus. What follows is a lengthy level full of platforming, fighting, and puzzle-solving: all the classic elements of a great God of War game. The twist is, while traversing through the inner and outer workings of Mt. Olympus, Kratos has to deal with battling the many different water snakes at different points. The entire sequence is very similar to the opening Colossus of Rhodes battle in God of War II … but much more visually stunning (you are not ready!).

After making it through the level (which includes a gorgeous sidetrack through Gaia’s heart), Kratos is confronted with fighting one final water snake. 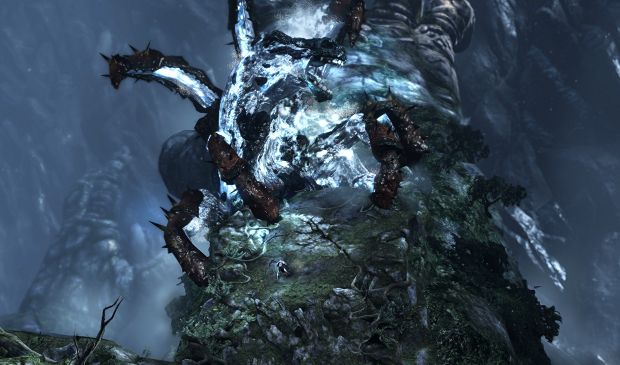 But this is no ordinary water snake. As the snake coils around Gaia, trying its best to pull the stubborn, strong Gaia off the cliff, it reveals itself to be only a small piece of the main boss: the god Poseidon.

That’s right; all the water snakes are only the tentacles of Poseidon, who has grown enormous in size.

Kratos stands in front of Poseidon — all in real-time and completely playable, mind you — as the titans move all around him. Gaia struggles to stay on the cliff and screams in agony as the water tentacles start to rip her apart.

The battle with Poseidon begins and, I will tell right now, it is one of the most ridiculously over-the-top, awesomely designed boss battles I have ever played.

But that is not the best of it. Right before I was asked to stop playing in fear of revealing too much, the coolest part of the opening sequence presented itself.

Once the giant Poseidon is defeated, he becomes small again and Kratos knocks him to his knees on the cliffs of Olympus. At this point, Kratos basically beats Poseidon to death using a series of QTE moves. But here is the kicker: all of this happens FROM POSEIDON’S POV. The uncomfortably long beating sequence is shot entirely through the eyes of Poseidon. It is out of control. Like, seriously out of control.

And even though I have explained everything in detail, I will keep the very last QTE move you perform secret. You need to experience it yourself without it being spoiled to fully experience its impact. It is just as clever as it is shockingly violent.

So, yeah. That was it. After defeating Poseidon, my play time came to an end and I walked away unbelievably impressed. The look on face for the entire 30 minutes was priceless. My mouth was hanging open the entire time. I think I even let out a few audible gasps and “woahs.”

At first glance, God of War III does nothing new. It really feels exactly like the other two games in the series. But the core mechanics in God of War are so great, changing too much would be a bad idea.

But that doesn’t mean everything is the same! Obviously, the game is a huge step up visually from the previous games, displaying the best graphics I have ever seen in a videogame — yup, even better than Uncharted 2. And the few new mechanics I saw implemented in the first 30 minutes of the game are original enough to feel fresh, but not too different to feel awkward.

Basically, the first 30 minutes I played were perfect. Absolutely perfect. The graphics were jaw-dropping; the gameplay was solid and already addictive; and there were more “holy sh*t!” moments in the opening sequence than some games have in their entireties.

Obviously I recommend God of War III to anyone who owns a PlayStation 3. If you own a PS3, there is no excuse to not pick this up when it is released on March 16th. Heck, even if you don’t own a PS3, get the game anyway! I bet even holding the box would be a cool experience.

Even though I only got to play the first 30 minutes of the game, I can say with confidence that God of War III is going to offer an unforgettable experience — easily one of the best this generation.

You are not ready.