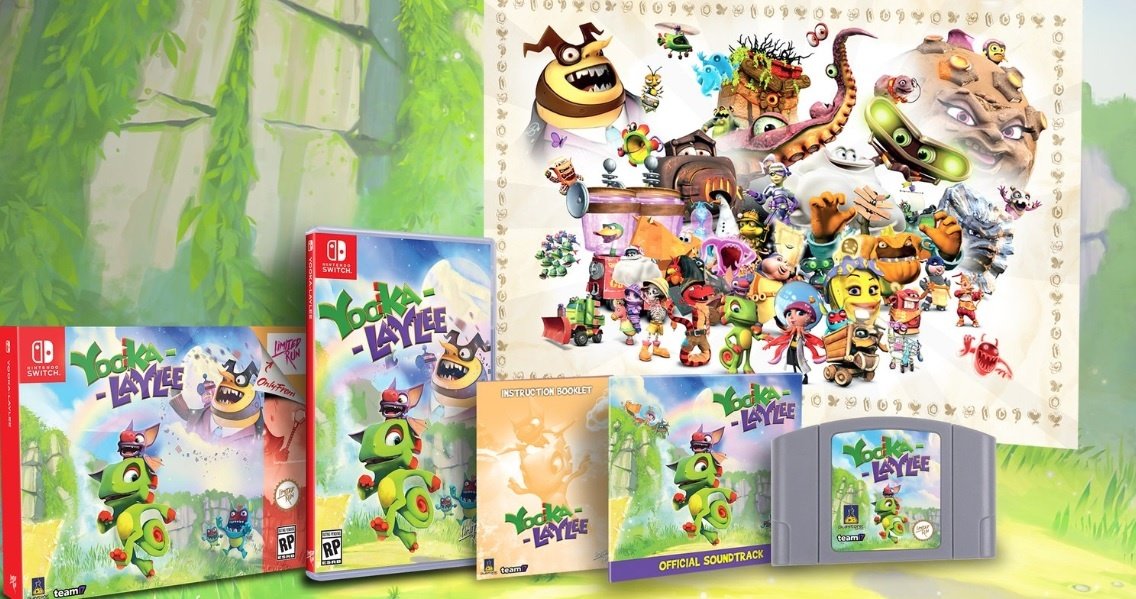 Limited Run releases have become a steady part of my Nintendo Switch diet, starting back in the fall when they had an open pre-order for Yooka-Laylee. Thankfully, their Switch releases have all been generous in this manner, rather than being restricted to their usual few thousand impossible-to-get copies that disappear within seconds of being listed online. Probably something to do with the manufacturing process. Just this past week, I had two releases hit my desk: Yooka-Laylee, and Golf Story, both gorgeously packaged with cute little manuals.

But Yooka-Laylee was the star for me. I grew up in the N64 era, a weird, special time where cartridges were in their last days, where collectathon games were becoming a thing (to some, notoriously), and where the 3D platformer was king. Banjo-Kazooie, Mario 64, Bubsy 3D…well, scratch that last one, but these were the titles that acquainted a generation with 3D gaming and acclimatized us to its quirkiness.

Yooka-Laylee was hyped all to hell. It was in the heyday of Kickstarter campaigns, amidst some major wins and disappointments (not to mention the stupid JonTron debacle). With the amazing Playtonic team behind it, and one of the best musicians in gaming history (fight me, I’m right), it was shaping up to be a worthy spiritual successor to Banjo-Kazooie.

It came, it saw, and it sort of floundered, like a turd in the wind. And frankly, I could not understand why.

Reviews were lukewarm, or outright unkind. The game was notably lacking in some areas: the hub world was confusing, the mini-games were almost universally disliked, and some people complained about agitating voice-overs, or just in general that they were expecting Yooka-Laylee to be more of an “evolution” of the genre rather than a straight clone of it – a proper follow-up to Banjo rather than a “re-imagining” which kept an archaic design at the forefront.

Whatever the case, it was a disappointment to many, but I wasn’t one of them.

This past year, my cousins came together and bought me a Nintendo Switch (God bless ’em) in what was a very generous offering, me being in school and broke, and them feeling it wasn’t right for me not to have the latest Nintendo console. We practically lived together (sometimes literally) over the years as kids, grew up playing NES, SNES, N64, and GameCube, traded Game Boy Advance cartridges, and even played with the awful voice chat functionality the Wii had when Animal Crossing came out. We are Nintendo veterans, and as such, I had some catching up to do. So one of the first games I bought was Super Mario Odyssey.

Of course, it is amazing. It’s everything you could want from a modern 3D platformer. It offers tons of freedom, and tons of collectables, but trims the fat at every corner. Much like A Hat in Time, it is also compared constantly, and unfairly, with Yooka-Laylee as a much better example of what the genre should be. And everyone who claims Mario Odyssey is better is unequivocally right.

But that doesn’t change the fact that, well, I actually really enjoy Yooka-Laylee. At the time of its original release, it was hard to sit there and just appreciate its simplicity – a variety of annoying bugs and some bad design choices probably didn’t help. But when I cracked open my physical copy of the game, and popped it into the Switch, for the first time it just felt absolutely right. Gone are a ton of the bugs, thanks to updates. The Switch port itself is absolutely fantastic, and plays great in handheld mode or docked, and is still visually nice to look at.

It’s the same game that it was on PC and PS4. On the PC, it runs at 60 frames per second, making it much smoother, but the nostalgia factor of what is basically a new Banjo game, on a cartridge, on a Nintendo system, adds just a bit of nostalgia value that it didn’t have in those other implementations. Apart from rose-tinted goggles though, I just find the game to be fun in its own right, regardless of warm memories for its predecessor. 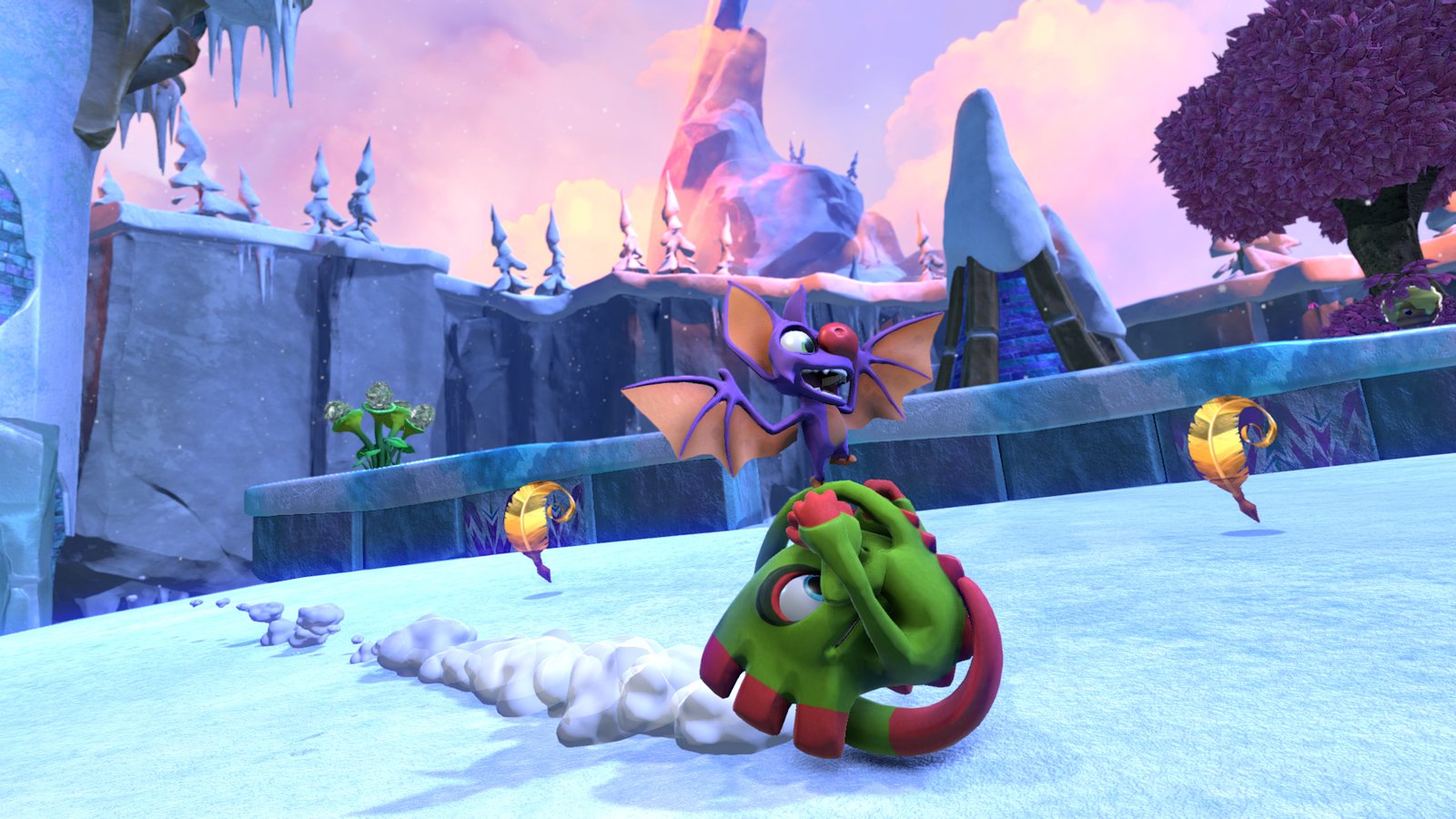 The sense of humor is right up my alley. I’m sure it’s because I have a borderline clinically concerning low IQ or whatever, but I can’t get over the fact that there is a snake in trowsers called Trowzer Snake. I like Rextro! His mini-games are a brief, mildly fun distraction that you only need to engage in for a few minutes out of the entirety of the game. I don’t mind the quiz sections. But everything else about the game to me is a lot of fun. I like the big sprawling levels. I love the freedom to explore them, and find Pagies on your own without constantly being told where things are or what you should be doing next. The music – my God, the music is so, so good. Even in the months where I didn’t play Yooka-Laylee at all, I would catch myself humming the tunes randomly.

The patches introduced a quality-of-life feature of signs in the hub worlds to show you were all the worlds are. But to me, they were never any more or less difficult to find than some of the worlds in the Banjo-Kazooie hub. In between the PS4 and Switch releases of Yooka-Laylee, I went back to play Banjo again. And yes, I will agree, it’s the better game. Of course. It’s a bloody classic. But there is almost nothing Yooka does that is worst than what Banjo does in terms of hub layout that annoys me more.

Yooka-Laylee‘s biggest failure to me is that it feels like an old N64 platformer. So I guess this is the one thing about it that is potentially subjective. And for me, that is precisely why I like it, why despite a variety of far “better” choices out there for 3D platformers today, that I have been playing it non-stop, not a second time, but a third for the Switch, after playing it through on both PS4 and PC.

I am not trying to convince anyone who has already drawn a line in the sand. But for the people out there like me who were scratching their heads when Yooka-Laylee was being dunked on…I feel you. I think it was a solid first effort by Playtonic, and I hope that it has been at least successful enough to warrant them taking a second crack at it. I am happy to own the lovely physical release by Limited Run, and still think it’s a super fun throwback to a bygone era – with all of its flaws and blemishes.

If you hate the game, I get it. It ain’t for everyone. But it tickles me in all the right, dirty, disgusting, revolting, disease-ridden shameful places, and I am happy to have it in my collection on what is, in my opinion, the best console in the last few generations. The Switch has brought me a lot of joy in what has been a really difficult year, and brought back some of the magic to games. And for me, Yooka-Laylee fits right in with the best of its rapidly expanding library.