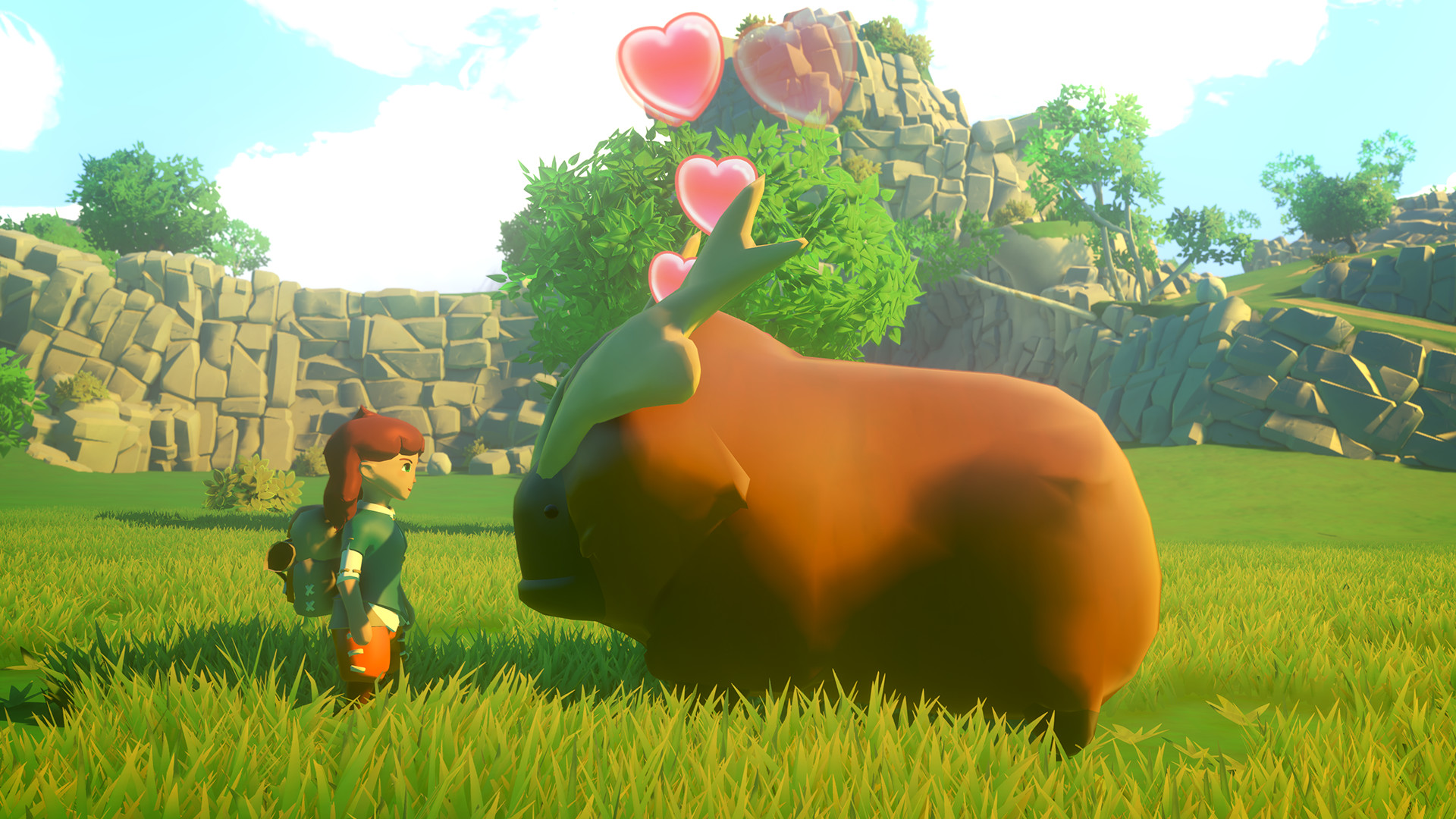 Earlier this week, I got a chance to sit down with two representatives from a local independent games studio by the name of Prideful Sloth to have an opportunity to check out their upcoming open-world adventure game for the PS4 and PC — Yonder: The Cloud Catcher Chronicles — prior to its mid-July launch.

Having previously covered the game for Destructoid, and after reading Caitlin Cooke’s impressions of the game when she tried it at PAX back in March, I had an inkling as to what I should expect when going in, but I still had some reservations. The game itself looked absolutely adorable — which, alongside its clear Wind Waker and Harvest Moon inspirations is what interested me greatly about it — but at the same time, I’ve found myself feeling somewhat ambivalent about open-world gaming after seeing an influx of them in recent years. To put it simply, I wasn’t entirely sure how a small studio would be able to handle a task as significant as building a large and engaging playable open-world.

Thankfully, it appears as if my concerns have been allayed. 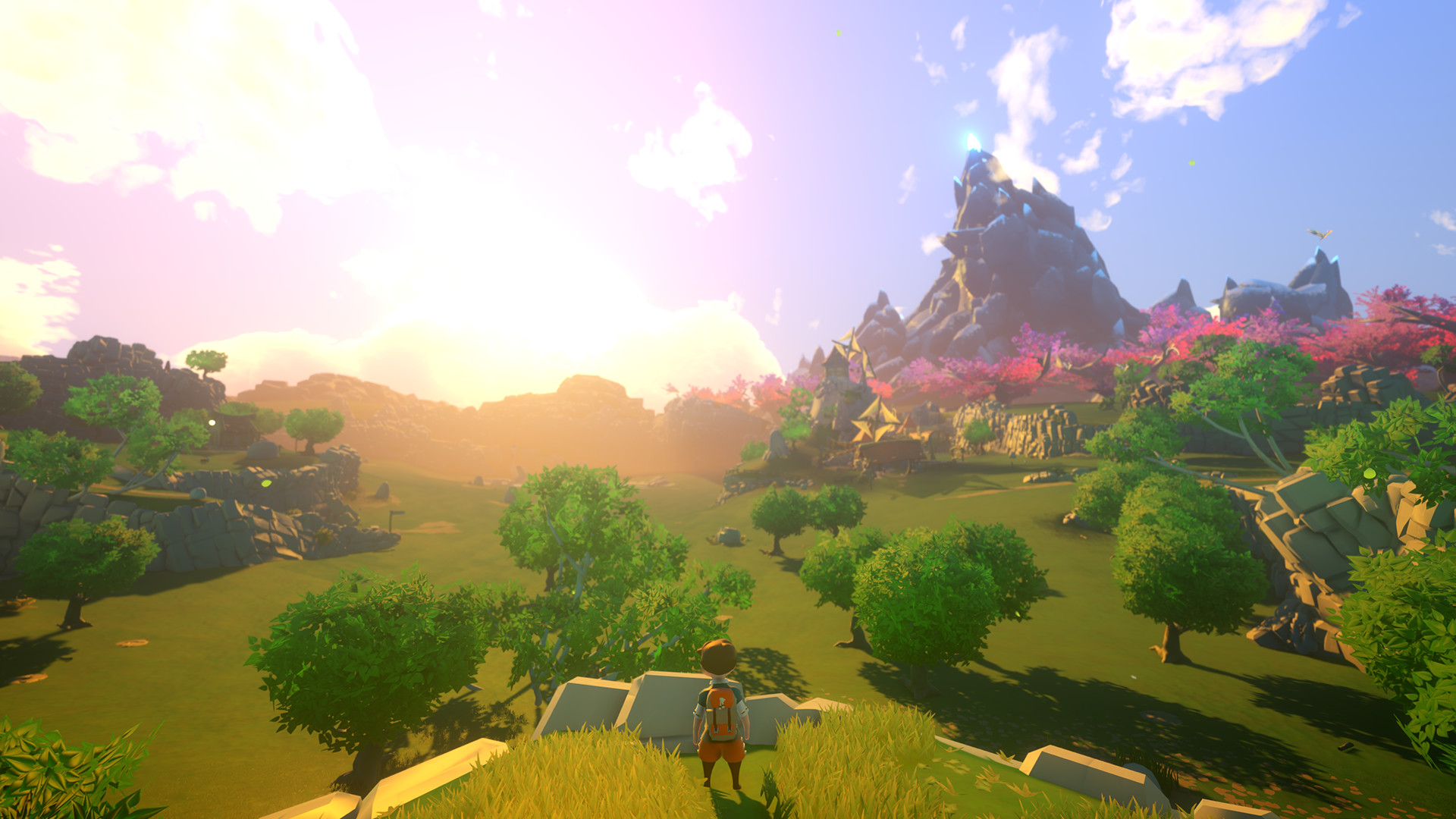 The basic premise of Yonder is relatively simple. You play as a player-created character who, after living abroad for quite some time, returns to the island of Gemea at the behest of a relative. After finding themselves shipwrecked on the island, they discover that the environment is being slowly enshrouded by a mysterious purple fog called the Murk.

By aiding Gemea’s inhabitants, and by slowly dispelling the Murk, they can rise up to restore the land to its former glory.

Admittedly, Yonder’s overarching story doesn’t sound like it’ll be anything particularly new or unique. Its purpose seems to be more as a means of steadily doling out new content to players who decide not to stray from the beaten path, as well as providing a form of motivation for progression. In fact, I was told by the game’s lead designer that there was once a point when the development team was considering forgoing a story altogether. Evidently, Yonder is a game that would much rather focus on the open environment of Gemea itself, rather than any strict narrative.

As I stated in the intro to this article, I felt the need to approach Yonder with a dose of skepticism, despite its endearing outward appearance. Having tried my hand at an absolute deluge of open-world games as of late — each with a differing level of quality — I wasn’t at all sure how a relatively small independent studio would be able to handle a task so momentous as crafting a large-scale game environment that manages to be enjoyable or compelling to explore and play around in. After all, for as much as I loved Breath of the Wild or The Witcher 3, there are a few titles misguidedly operate under the assumption that sheer map size and volumes of content are the most important aspects of open-world game design. We saw something similar occur relatively recently with the much-maligned No Man’s Sky, although I will admit to still deriving some enjoyment from that game.

Within only a few minutes of playtime, my fears were mostly alleviated. While I was only able to check out a handful of the game’s environments, including a grassy plain and an icy tundra, the island of Gemea feels surprisingly well-crafted for something built by a such a comparatively-small studio. This does come with the stipulation that it’s always possible for the novelty of the game to wear off over time, but throughout my short hands-on with it, I found the core loop of wandering around the island and gathering resources for crafting, as well as occasionally helping out the NPCs that I came across to be quite engaging.

I will say that some quests that I came across could have been worded a little better. Lines of dialogue and objectives were occasionally far vaguer than they could have been. On almost all of these occasions, I was met with the reassurance that the issues have been amended in later builds of the game than the one I was playing on.

Straying from the beaten path (or getting distracted by shiny things, as I am wont to do) is a highly-rewarding affair. Doing so often leads to the acquisition of resources, which can be traded with the villagers, the discovery of additional farmland to cultivate using the game’s Harvest Moon-like farming system, and treasures such as currencies and cosmetic gear. In this regard, Yonder is a game that seems to be willing to dole out instant gratification at almost any moment. 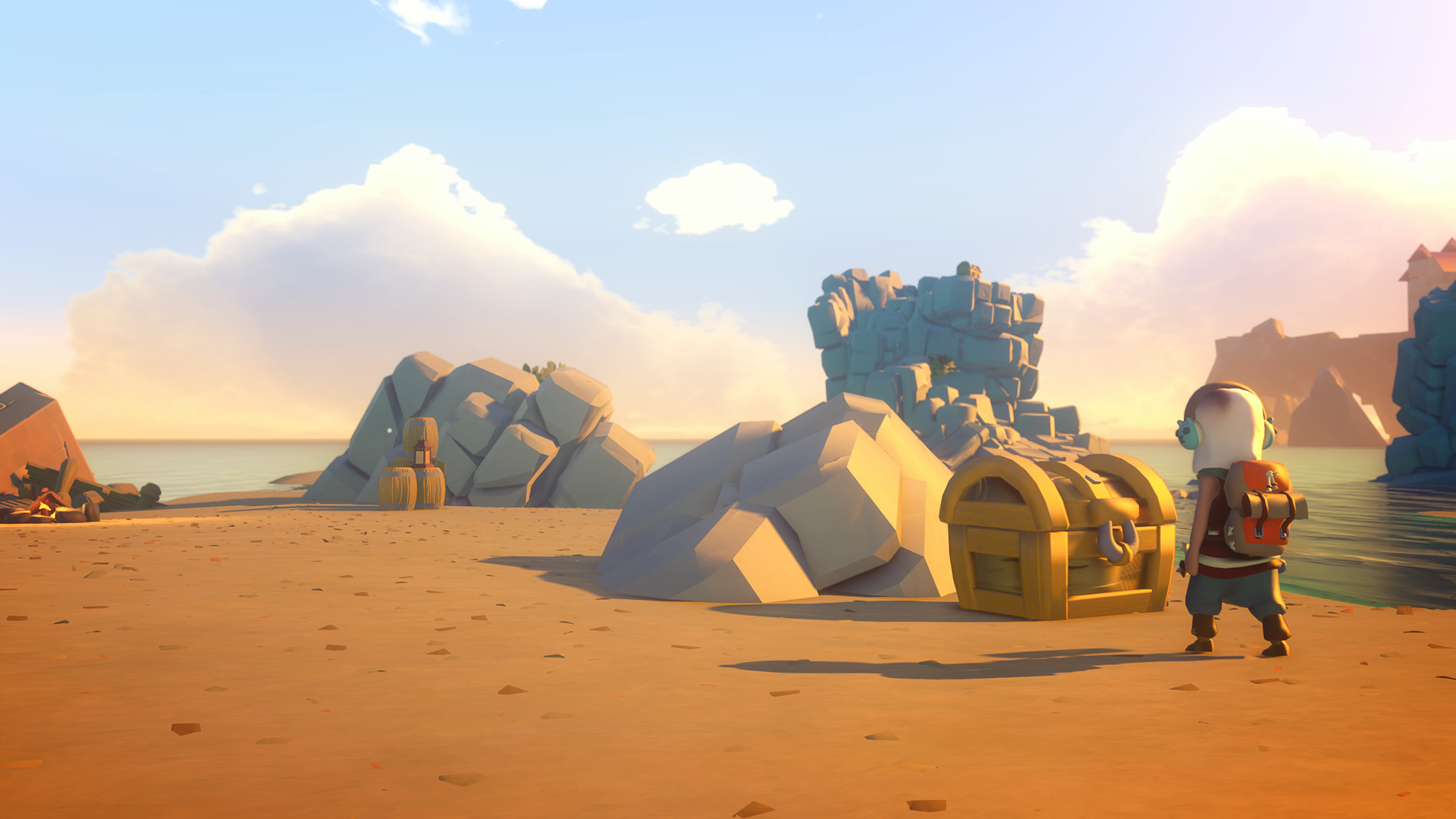 Yonder also contains multiple collectables scattered throughout its world in the form of cats — which will eventually be useful for a crazy cat lady-themed side quest — and Sprites. The Sprites themselves are simply adorable. While they’re functionally identical to glorified keys, as their main purpose is to clear out roadblocks that impede on player progress, they all have their own unique appearances, names, and bits of dialogue when you collect them. In a way, I couldn’t help but be reminded of the Dragon Eggs from Spyro 3, although Yonder’s Sprites are far more varied and individualised than the collectables found in Insomniac’s PlayStation-exclusive platformer.

In fact, “adorable” is a word that could be used to describe the bulk of Yonder: The Cloud Catcher Chronicles. This game simply exudes cuteness — a fact that becomes most apparent whenever I encountered a new animal species for the first time. The wildlife of Gemea usually consists of amalgamations of two real-world animals, such as wombat/squirrel hybrids, or pink bears with dog heads. There are some exceptions, though. Fabbits, for instance, are essentially just incredibly rotund rabbits. Sure, the animals in Yonder are conceptually simplistic, but from what I’ve seen, they fit in nicely with the world of Gemea and the game’s overall playful tone.

I should probably mention that I have a weakness for cute things, and I’ll most definitely admit to sporting a dumb and cheesy grin on my face whenever I encountered a new species of creature.

So, it should be evident that I was fond of the game’s art direction. Admittedly, Yonder’s character models and environments aren’t impressively detailed from a technical level. It’s evident that — as Prideful Sloth is an independent studio with a smaller budget and far less human resources than a larger developer — there were some concessions that had to be made in order to build a game of this scope as efficiently as possible. Where it does shine, however, is with its art direction. Taking clear cues from The Wind Waker (which is still the best Zelda game), Yonder has a highly cartoony aesthetic that manages to achieve a fair bit with the more simplistic models and assets. 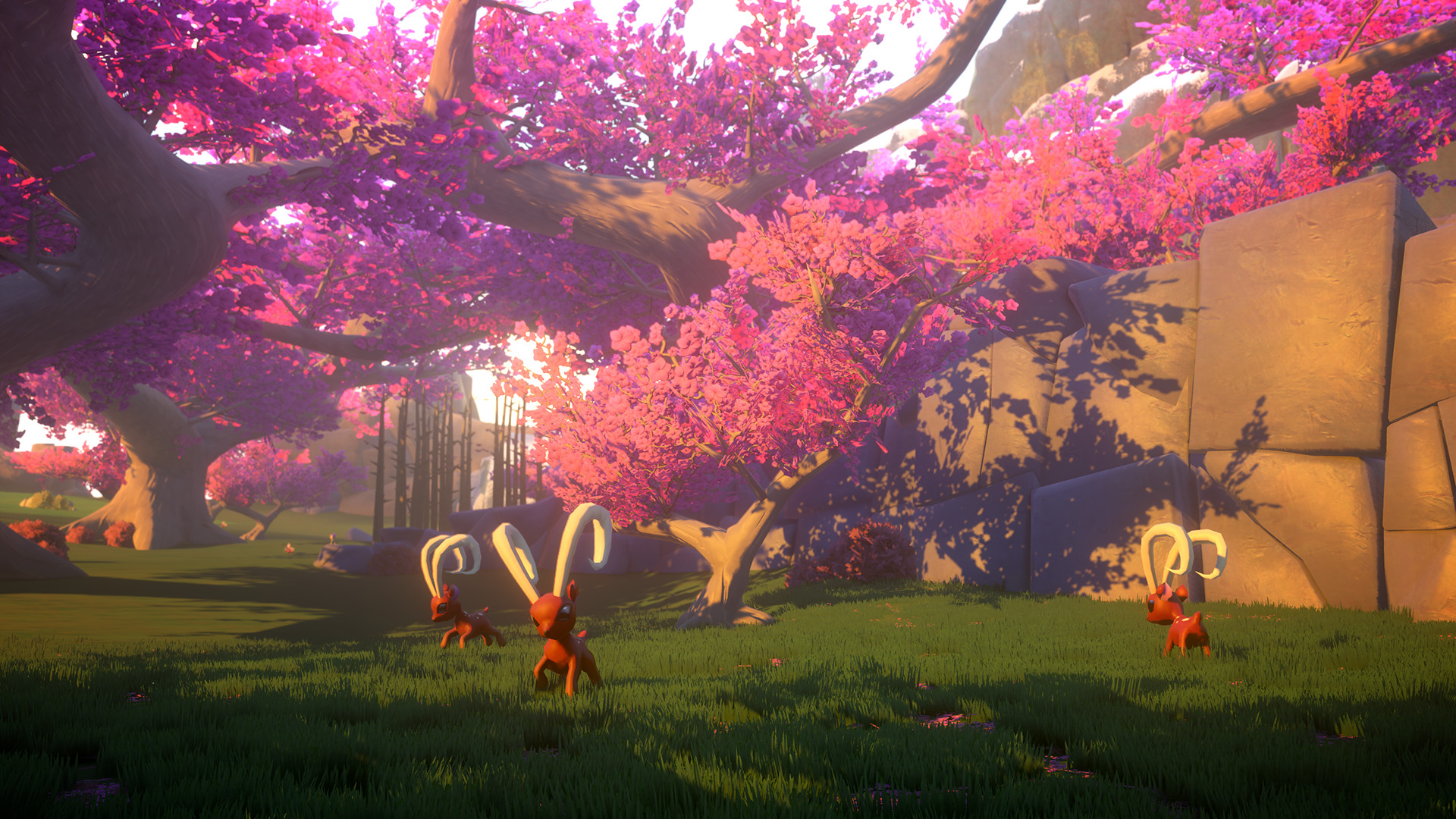 Interestingly enough, one of the early builds of the game that I got a chance to check out included a sliding mechanic that I’ve been told will not be making it into the finalised product. Essentially, I was able to traverse the environment by sliding around in a manner that’s not unlike shield surfing in Breath of the Wild. The issue with it mostly boiled down to it being somewhat buggy. Even during my quick look at Yonder, I noticed that the mechanic would often cancel out animations when gathering resources. I was also informed that there were problems with it allowing for players to clip through the environment.

It was a fun little mechanic to play with, but I can see why it was left on the cutting room floor. According to the two representatives from Prideful Sloth that I spoke with, there was a general sentiment that it will be missed, but it simply wasn’t feasible to try and implement it in a way that was without issue while having to contend with time, human resource, and budgetary constraints. While this ultimately doesn’t have much relevance with regards to the state of the finalised build, I still find it fascinating to have a first-hand glimpse at a bit of content that wound up being cut. There’s also a chance that the mechanic may make it back into the game in some form, be it through a post-release patch, or as DLC.

As you may have noticed by now, I’ve been comparing Yonder’s visual style and gameplay to several other titles that already exist on the market. The reason for this is simple; Yonder is by no means a particularly innovative game. In terms of gameplay, it brings nothing new to the table whatsoever. Despite its lack of innovation, it still manages to do a respectable job of merging the design elements and mechanics that it does borrow into a package that feels enjoyable to play. As is the case with many open-world games, I do have to wonder about its ability to retain my interest over a long stretch of time, but first impressions are quite positive indeed.

Yes, it’s true that much of what is demonstrated in Yonder can be seen elsewhere, but I don’t think that such a design choice is worthy of condemnation if the finalised product implements these ideas in a manner that manages to be consistently engaging. If my initial impression is anything to go by, it appears as if the full game may be able to do just that.

I guess it also helps that the game’s absolutely adorable.

[Disclosure: The PR firm representing Prideful Sloth employs Kyle MacGregor and Zack Furniss. The author has never worked directly with Kyle, but has worked with Zack during his tenure at Destructoid. No relationships were factored into this article.]