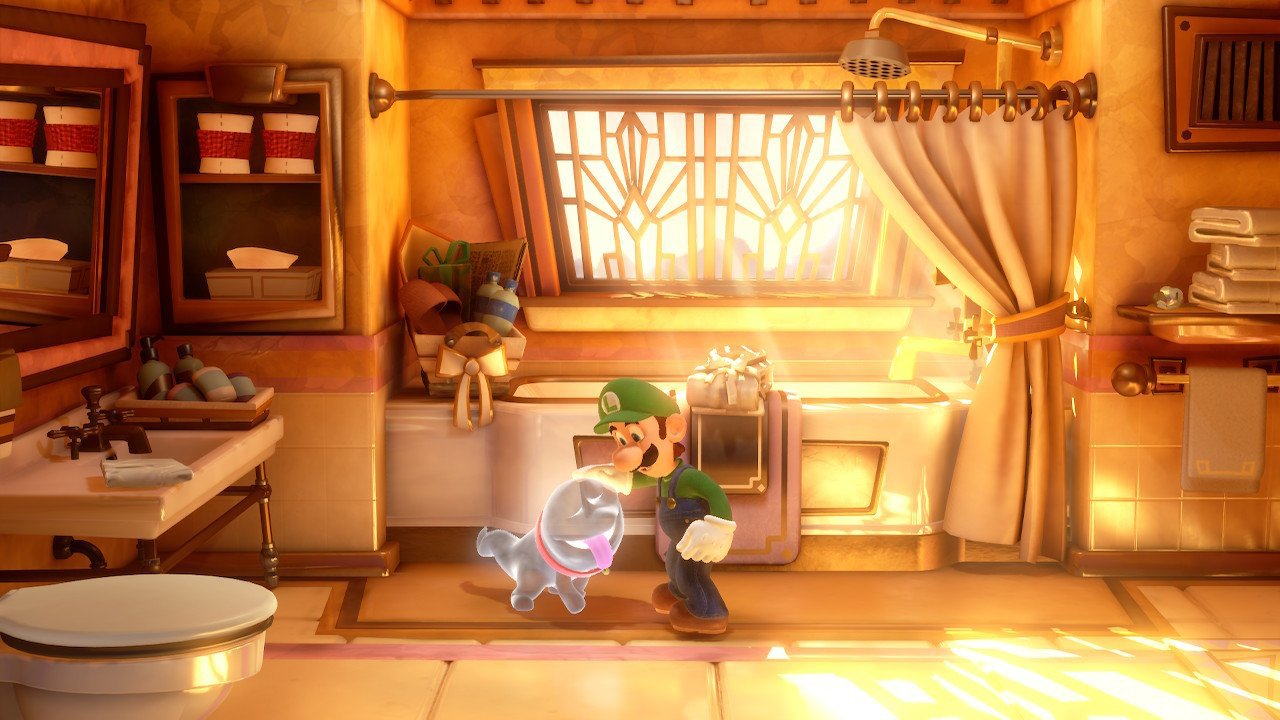 The first five floors of The Last Resort

Despite its faults, I will always look back on my time with the original Luigi’s Mansion fondly. After being forced to play as Luigi for years as my older brother would always get to be first player, it was nice to see Nintendo put him in a game of his own; one full of personality and ghostly characters that felt as though they had a long, family history. Luigi’s Mansion: Dark Moon got rid of a lot of that personality, replacing it with more — specifically, more mansions, more variety, and more replay value.

In my discussions with Luigi’s Mansion fans, I’ve found many have a strong preference for either game, some favoring the characterization of the first while others go for the wonderful Scarescrape mode of the sequel. It’ll be interesting to see what these groups think of Luigi’s Mansion 3 when they get their hands on it at the end of the month. Because it’s shaping up to be the best of both worlds and so much more.

Things go south for Luigi and company pretty quickly at the beginning of Luigi’s Mansion 3. After checking into The Last Resort — a posh and isolated hotel he’s staying at with Mario, Peach, and a couple of Toads — Luigi quickly discovers this resort is all a ruse. The ghosts he valiantly caught in Luigi’s Mansion: Dark Moon are on the loose, with big baddie King Boo looking to make the entire Mario clan the latest entries in his art collection. After narrowly escaping down a laundry chute, Luigi finds a hidden Poltergust G-00 and sets off to do what he does best: wrecking the shit out of a building like it’s demolition day on a home improvement show.

The first five floors of The Last Resort don’t feature any of the themed decor later floors do, but this hotel is one exquisitely designed building. The opening sequence when everything is bright and sunny is extraordinary and perfectly sets up how dark and twisted it becomes once night rolls around. The elegant lobby transforms into a vexing vestibule, the rooms turn into crime scenes, and the haughty hallways become haunted by ghosts and the series most creepy-looking spiders to date.

To deal with the creepy crawlers, alive or otherwise, Luigi has a set of new tools he can use to defeat them. The Polterguist G-00 retains the abilities from Dark Moon, including suck and blow features, the Strobulb, and the dark light. New to the G-00 are the suction shot that is used mostly in puzzle solving, the burst which allows Luigi to jump, and the slam attack he can use to pulverize ghosts like he’s the Hulk at the end of Avengers. Also new is Gooigi, returning from the 3DS remake of Luigi’s Mansion.

In two-player mode, the second player can take control of Gooigi as the players work together to advance through the game. Now, I am going through the campaign solo right now — I will be giving co-op a shot for the final review — and I’m interested to see how some of the situations are handled. Because while Gooigi so far has mostly been used for light puzzle-solving and accessing areas Luigi can’t squeeze through, there is also one battle against a hilarious Paul Blart-esque mall cop in the hotel’s shopping section that could only be done as Gooigi. How this works with two players, I don’t know.

That boss battle is far the best I’ve encountered and it’s another example of how the developers are injecting genuinely good comedy throughout. This is a funny game and that humor rests on the shoulders of the character animators who are clearly putting the power of the Switch to good use. One of the most compelling aspects of the Luigi’s Mansion series is how the developers have utilized the available technology to give Luigi a personality through his actions, voice, and facial expressions. In 3, Next Level Games is taking Luigi far beyond what we’ve seen him do before, infusing his reactions with movements that would fit right in with a Buster Keaton comedy.

Progress through the Hotel hasn’t been as simple as you might expect it to be. Various ghosts, mostly the boss characters, have taken the floor buttons to the elevator and hidden them on their used-to-be persons. Those buttons are not recovered in any sort of order and you jump around from floor to floor as you explore. Areas not accessible earlier in the game become urgent destinations once you unlock certain tools in your Poltergust G-00. There is always a reason to return at least once to a floor you’ve already conquered.

Like with the previous two games, Luigi’s Mansion 3 isn’t just about catching ghosts. It’s also about getting filthy rich. Every room in the building is loaded with coins, cash, and gold bars with special critters scattered throughout that reward you heavily if you manage to suck them up into your Poltergust. Looting the crap out of each room might seem like it would get tiresome, but it’s actually a great way to discover hidden puzzles. The Last Resort is full of secrets and I’m routinely rewarded for experimenting with my vacuum thingamajig in each room I enter. These puzzles, along with hidden gems and hidden boos, provide a great reason to explore every nook and cranny of this hotel.

There are still so many floors for me to see and ghosts to catch, as well as the Scarescraper and Screampark multiplayer modes. Expect to find out about all that and more when the full review of Luigi’s Mansion 3 hits later this month.

[This preview is based on a retail copy of the game provided by the publisher.]