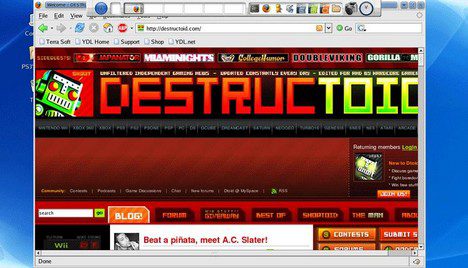 Can’t justify the purchase of a PlayStation 3 other than the possible profit that can be made on eBay? Well, look no further than Yellow Dog Linux. When Sony said that the PS3 was a computer, they weren’t actually lying. This means that you can use programs such as Firefox, Gaim, GIMP, and even Open Office.

Dtoider Lawl recently set up Yellow Dog on his PS3 and was kind enough to offer us some pictures. Destructoid on your Playstation 3 is damn sexy, isn’t it? See more pics of hot Linux on Sony action after the break.

• The week of December 25: Download Install & Source ISOs via the public mirrors.

To get Linux up and running, you must first split the PS3’s hard drive into two partitions so that the GameOS and Linux can run on dual partitions. According to Lawl, you have to decide whether you want to devote 50 gigs to PS3 and 10 gigs to Linux or vice-versa. Why Sony, why? Lastly, a USB keyboard and mouse are required.