Good God, we’ve already done so many previews of Kirby’s Epic Yarn. There’s the one that Jim wrote, and the video with me and Jim playing the game, and the write-up that Hamza did last month, and the impressions that Chad did from E3. It looks like just about everyone on staff who’s played the game has come away happy. I’m sure it will make it to at least one Dtoid staff member’s GOTY list.

Even with all of those previews, there are some questions that remain unanswered. In particular, the game’s difficulty remains in doubt. You can’t die in Kirby’s Epic Yarn, so does that mean it’s automatically easy, and if it’s easy, does that mean it has no depth, or worse, that it’s not worth replaying?

I have good news related to these inquiries. Check out my full preview for the answers. 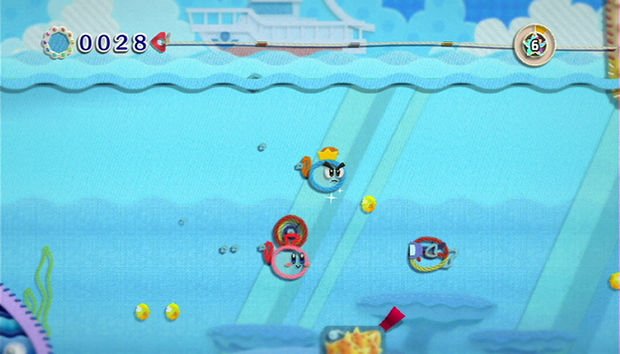 Ben PerLee and I played through a few new levels of Kirby’s Epic Yarn. This was stuff that took place near the end of the game, so the difficulty was definitely ramped up. There were also several Nintendo employees in the room, who made it a point to mock us whenever we messed up. Already, I was seeing how Kirby’s Epic Yarn might not be as easy as it previously felt.

Still, no matter how tough things get, you still can’t die in the game. Take a hit, and you lose all of the money that you’ve acquired up until that point, and that’s it. It’s a like a 2D Sonic game in that way, except for the fact that Kirby (and his new pal Prince Fluff) can live without money. Sonic may not be able to tolerate poverty, but Kirby and Co. are more than happy too keep rolling along with empty wallets. 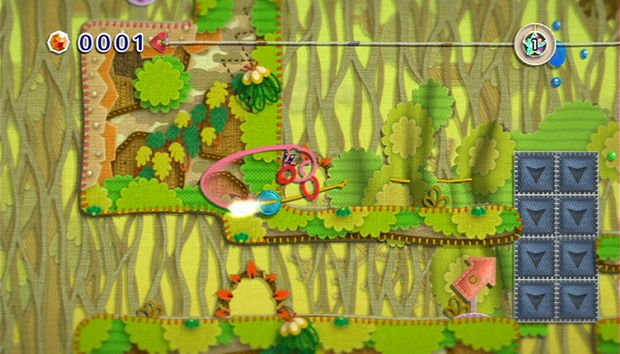 The similarities to old-school Sonic don’t stop there. Like with most Yuji Naka games, Kirby’s Epic Yarn subscribes to the “You can just survive this level, or you can you really master it” philosophy of game design. That’s where the real difficulty comes in; self-induced replay. Instead of forcing you to replay a level when you die, Kirby’s Epic Yarn gives you the choice; do you want to sight see, or you do you want to unlock new stuff, and more importantly, new levels? If you want to play the entire game, you can’t die much, and you’ll have to really explore every inch of every level. It’s kind of like Dead Rising 2 in that way, except without all of the dumb appointments to keep. The game rewards you for exploring, collecting, and ass-kicking, but it never bogs you down with annoying time limits.

That said, the game does know how to apply pressure when it wants to. There were a few levels that we played where the ceiling or floor started closing in on us. You had to move quickly and intelligently in order to keep from getting squashed and losing all of your dough. There was another level where you had to jump from fast-moving roller coaster to fast-moving roller coaster. It was pretty high-intensity stuff, and felt like it would take quite a few replays to master. 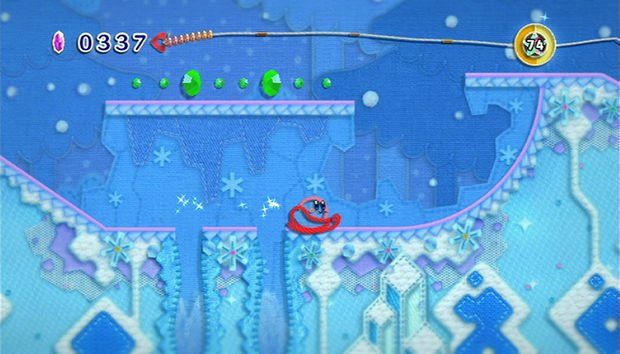 It was in that level that I learned the importance of keeping your friends alive. When you take a hit, you lose your money, but that doesn’t mean it’s gone. If you’ve got a co-op partner, they can pick up most of your dough after it flies from your body. For that reason, it’s often worth it to save a friend even if your own death is otherwise inevitable. At one point in the game, PerLee and I were both falling to our doom.

We’d both fallen off from that roller coaster, which was whizzing over our heads at top speed as we sank to our deaths. I was slightly closer to the roller coaster than PerLee was, so I grabbed him with my yarn whip, and flung him up to the roller coaster, where he landed to safety in the nick of time. It’s a good thing I grabbed him before he went into “angel lift”; the Kirby’s Epic Yarn‘s equivalent to New Super Mario Bros. Wii‘s “safety bubble.” Had he gone into safety mode, we both would have been dead (and poor). 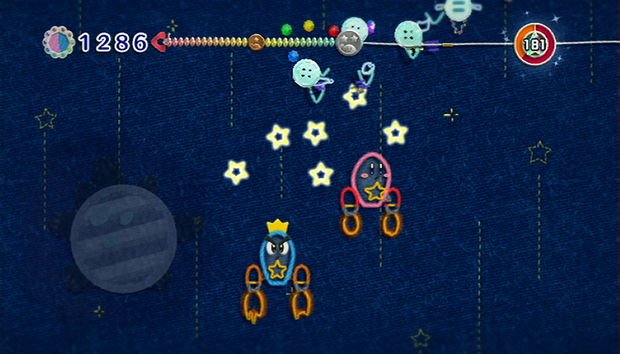 As a result of my heroics, I was rewarded with cheers from the Nintendo employees in the audience. Financially, I still suffered a huge loss, but Ben was able to pick up a lot of what was left. More importantly, Ben didn’t lose his money, which meant something to me too, because in two-player mode, you share a wallet. Thanks to my save, we managed to cross the finish line with enough money between us to see a new level. However, Ben did end up with more money than me at the end, so his character (Kirby) got to do a victory dance, while my guy (Prince Fluff) sat there in silence.

I’ll get you next time, PerLee. Next time.

Shortly after that, we got to take on King Dedede. He was a fun fight, but it was a little anti-climactic, as I’m used to Dedede being a badass last boss. In Epic Yarn, he’s merely the puppet of the game’s grand master, a thing called Yin-Yarn. Though it took a while to figure out how to beat Dedede, we ended up with a lot more money after he was down than we had after previous levels. 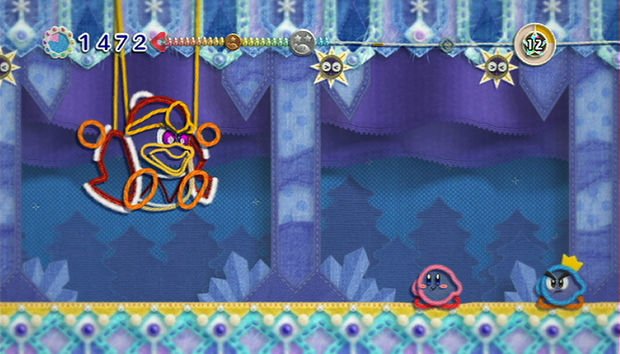 For instance, we got our butt kicked in the water level where you get the new dolphin power-up. When you’re a dolphin, you’ve got speed, the power to barrel through enemies, and do mid-air somersaults, but with all of those added powers come a lot of new challenges. Although the game may seem slow-paced on video, there’s actually a lot going on here, particularly with two players. As Ben put it, the game’s ocean level was like “Ecco the Dolphin if Ecco the Dolphin was actually fun.”

Sadly, we didn’t get to move further into the game, where I assume we would have eventually met Meta Knight, then moved onto the final levels and bosses. I guess Nintendo had to save something for us to review when Kirby’s Epic Yarn is released in a few weeks. Though I can’t say for sure until I play it from start to finish, it’s looking like the game’s difficulty is just fine. It may lacks the harsh edge that makes games like Mega Man 10 and Super Meat Boy so popular with 2D platforming fans, but it’s definitely got a brand of challenge all its own, one that you can attempt to take on, or completely ignore. 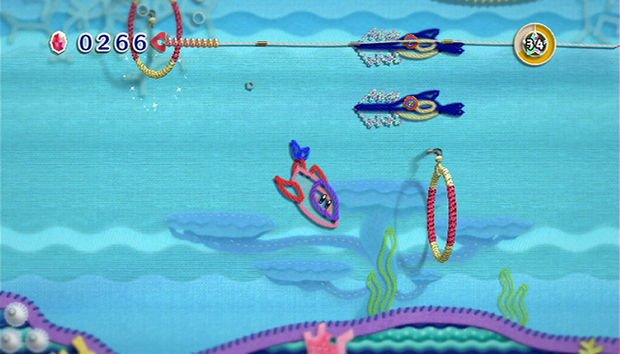 Having that choice not only opens up who the game will appeal to, but also who you can play it with. I could see people playing this on dates, with their parents, or even with their kids. Personally, I’ll probably be taking the game on solo. I don’t want anybody dancing in my face because they’re richer than me. I had enough of that in High School.