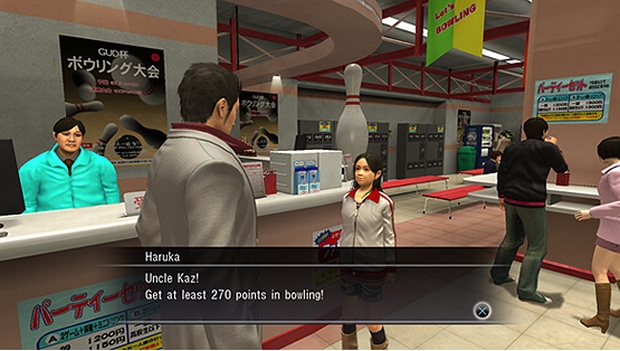 After much wailing and gnashing of the teeth, gamers finally convinced Sega to release Yakuza 3 in North America and Europe. And Sega’s not messing around trying to get you to make with the buying.

At least, not in Europe, as the game is getting a “Premium Edition” that includes four pieces of DLC, a 31-track soundtrack, and an animated “Who’s Who” relationship chart that tells you who everyone is and how they’re connected, a useful tool for folks new to the series or veteran gangsters looking to refresh their memories. Preorder customers (Premium or not) will also get exclusive costumes and two-player minigames, like golf, darts, pool and bowling.

North Americans are unfortunately placed at the mercy of preordering, as the DLC pieces are only packed in with preorders and not on-shelf copies. A few grains of salt are tossed in, as the Challenge Pack DLC (the ones with the two-player minigames and costumes) is only included for GameStop preorder customers.

As for what, exactly, these four DLC packs contain, the PlayStation Blog spilled the details:

• Battle for Survival – Take on all the bosses of Yakuza 3 as Kazuma
• All-Star Tournament (7 character tournament)
• All-Star Tag Tournament (8 team tournament)
• Haruka’s Request – This unique series of challenge missions will send you on a task of exploration throughout the entire Yakuza world, playing mini-games and entertaining Haruka.

As one of the gamers who wailed and gnashed my teeth at the prospect of losing the game, I feel almost obligated to pick it up, but what about you? Are you ready to train some hostesses?